1 Young Driver Is Poised To Take Over the Truck Series 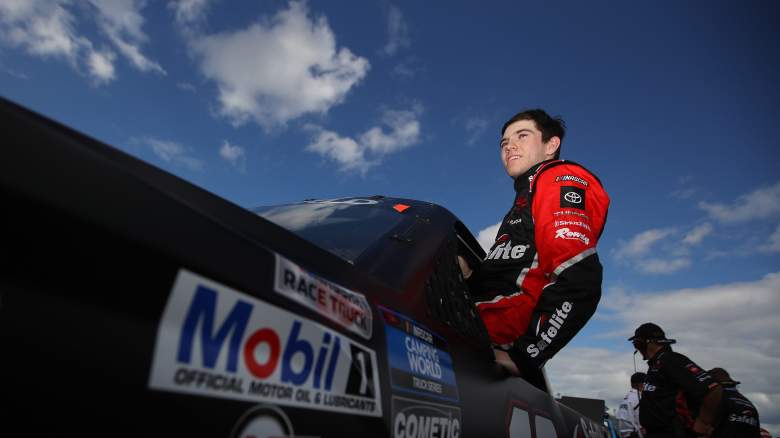 Chandler Smith is off to a strong start in 2022.

The NASCAR Camping World Truck Series has a new driver poised to take control. Chandler Smith, the defending Rookie of the Year, is off to a hot start in 2022 with one win already under his belt.

The driver of the No. 18 Kyle Busch Motorsports Toyota Tundra TRD Pro was not able to reach Victory Lane until the 18th race of his rookie season (2021), but he took care of business early in 2022. He held off Zane Smith and his boss Kyle Busch at Las Vegas Motor Speedway and punched his ticket to the playoffs. He also achieved this goal with a stunning last-lap move.

Smith and Daytona winner Zane Smith took the white flag while racing side-by-side, but the driver of the No. 38 used the bottom lane to gain some ground. He built up a slight lead and jumped to the top of the track, but Smith simply dove to the inside and used a crossover move to take back control. The Kyle Busch Motorsports driver held on to capture the third win of his Truck Series career.

Zane finished second, but NASCAR disqualified the No. 38 after it failed post-race inspection due to lug nut issues. Busch moved to second place while Zane dropped to last.

ALL the latest NASCAR news straight to your inbox! Subscribe to the Heavy on NASCAR newsletter here!

Smith, who is only starting his second full-time season, went winless in his first 33 starts dating back to the 2019 season. However, he has since won three times in the past seven races, dating back to the race at Bristol Motor Speedway. Now he is poised to return to the playoffs with even more confidence and experience.

This is Vegas right? Well…we now celebrate a P6 finish tonight due to a driver disqualification in post-race tech! pic.twitter.com/2b3fMjWPlm

There were multiple drivers that turned heads during the second Truck Series race of the year. For example, Carson Hocevar battled for the lead during all three stages, even going toe-to-toe with Kyle Busch at one point, before an incident sent him sliding through the infield grass.

Similarly, Christian Eckes held the lead during the final stage and appeared to be within reach of his second career victory. However, an ill-timed block sent him spinning off the nose of Busch’s No. 51 Toyota and into the inside wall, ending his day early.

Matt DiBenedetto, a former Cup Series driver, signed with Rackley WAR prior to the 2022 Truck Series season. He took over the No. 25 Chevrolet Silverado with no previous experience in the series and immediately turned in a 10th-place finish at Daytona International Speedway.

DiBenedetto followed up his season-opening performance with another top-10 at Las Vegas Motor Speedway. He started 15th overall after qualifying but raced on the edge of the top-10 throughout the night. DiBenedetto then avoided incidents on the wreck-filled final lap and moved up to seventh overall. NASCAR’s disqualification of the No. 38 moved DiBenedetto up one more spot to sixth overall.

The California native is still learning the ins and outs of the Truck Series vehicles, but he continues to use his experience to contend. He has an average finish of 8 after the first two events, and he should only improve with more starts, provided he can continue to avoid the on-track incidents.

A Troubling Trend for Stage Winners

The early parts of the Camping World Truck Series race featured one name atop the leaderboard. Ben Rhodes, the defending champion, won the first two stages of the Las Vegas race before a crash ended his day. Contact with Ty Majeski sent Rhodes hard into the wall and destroyed the driver’s side of the No. 99, removing any opportunity to fight for the win.

The race at Las Vegas Motor Speedway continued a troubling trend for NASCAR’s biggest names. No driver that has swept the first two stages of a race has managed to secure a win. They have all sustained damage in incidents during the final stages.

Per Joseph Srigley of TobyChristie.com, John Hunter Nemechek (Truck Series), Daniel Hemric (Xfinity Series), and Martin Truex Jr. (Cup Series) all dealt with this issue during the season-opening weekend at Daytona International Speedway. They swept the first two stages before being involved in incidents.

The trend continued at Auto Club Speedway with Tyler Reddick. The driver of the No. 8 Richard Childress Racing Chevrolet turned in a dominant performance while sweeping the first two stages of the Cup Series race. However, a flat tire sent him to the top of the track during the final stage before contact from William Byron’s No. 24 caused considerable damage.

READ NEXT: Alex Bowman Doubles Down With Support of Animal Shelters [EXCLUSIVE]