10 Things: With VanVleet out, Trent Jr. leads the way for red-hot Raptors 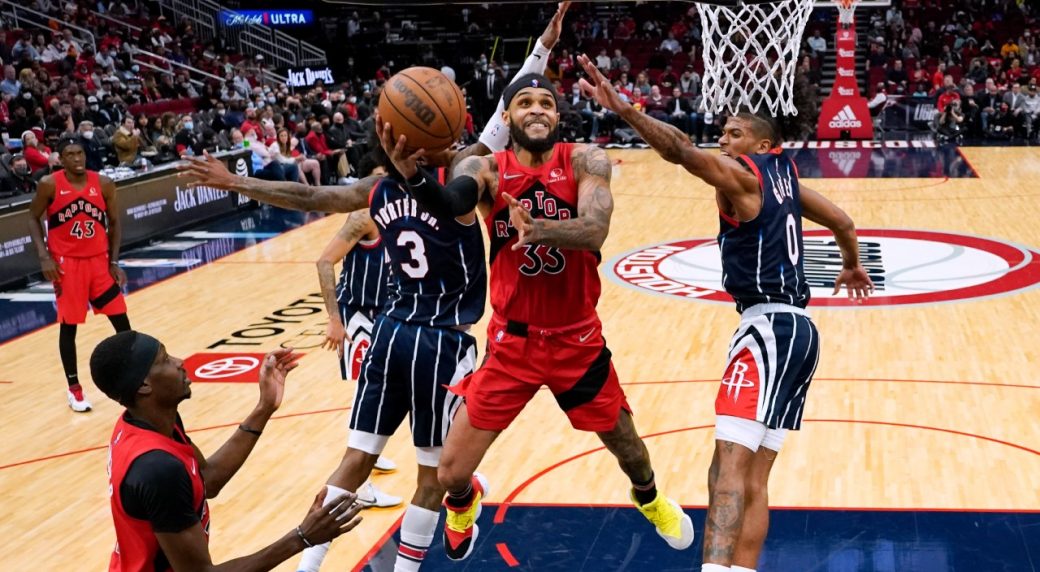 Here are 10 takeaways from the Toronto Raptors’ 139-120 win over the Houston Rockets.

One — The win streak hits eight games as the Raptors remain the hottest team in the NBA. Even with Fred VanVleet sitting out the second night of a back-to-back to rest a sore groin, the Raptors still had more than enough firepower to collect their third blowout win in four nights all on the road. Granted, some of the opposition has been comically bad, but the Raptors showed enough professionalism to build up a lead and to maintain it until the end. With his bench stepping up, Nick Nurse was able to extend his rotation and everyone on the floor was able to contribute towards this feel-good win.

Two — Trent Jr. led the way with 42 points, which is just shy of the career-high 44-point explosion that he put up shortly after being traded to the Raptors at last year’s deadline. With VanVleet out, Gary Trent Jr. took on the added responsibility of leading the team and was dominant from start to finish. Trent Jr. showed off the entire scoring package, complete with the pull-up jumpers in isolation, the driving layups past his defender, the movement off-ball on curls or cuts, the sly moves to bait fouls, and also a handful of self-generated baskets off his work on the defensive end as three of his five steals were directly converted into transition baskets. And not to be overlooked with his 42-point night, but Trent Jr. just collected 10 steals in the span of 24 hours, with five each against OKC and Houston.

Three — Trent Jr. is taking the next steps as a scorer by creating on his own. That was one of the holes in his game last season after arriving in the trade was that he would be efficient playing alongside other playmakers who were setting him up, but he had poor shooting nights when asked to do it on his own or when he came off the bench. There can be a tendency for Trent Jr. to fall in love with the mid-range jumper, which is still very much a part of his game, but he’s also diversifying his isolation game. He’s consistently able to set up the pull-up three using dribble moves to sell the drive, paired with his rehearsed footwork to side-step or stepping back to create the space to shoot. He’s also getting downhill effectively, and while he lacks the outright explosiveness or quickness to burst at the basket, Trent Jr. makes up for it with craft including hook shots and push floaters to evade the shot blocker. He’s also quietly leaving his leg out slightly on his jumper which has drawn shooting fouls, and there is even the occasional pass to spot the cutter when he is double-teamed.

Four — Anunoby was excellent when needed in leading the second unit at the start of the fourth quarter. OG Anunoby ordinarily shares those responsibilities with Pascal Siakam, but his fellow forward was limited due to foul trouble, which meant it was up to him to lead an on-the-fly lineup with Malachi Flynn, Dalano Banton, Khem Birch, and Chris Boucher . Anunoby was hardly alone in his efforts, but he knocked down two threes, forced a stop at halfcourt which allowed him to lob it up to Boucher for the alley-oop, and he drew two defenders on a post-up which he spun into a high-low pass to Birch behind the defense for a layup that put the Raptors up 19. That was perhaps the only shaky moment in the entire game with the Raptors having to turn to an unfamiliar group, and Anunoby held it all together.

Five — The Raptors sustained all game with their full-court press. Nurse broke it out in the first quarter just as a way to spark his team on the defensive end given that they allowed 41 points in just the opening frame, and it immediately produced two stops leading to baskets. Nurse returned to the strategy all night, especially when his bench was in the game since they had more energy than the starters, and the Rockets just couldn’t solve it. Even in the fourth quarter, after the Rockets turned it over twice in a row against full-court pressure, head coach Stephen Silas called a timeout to explain for the umpteenth time how to advance the ball. And yet, on the ensuing possession, Kevin Porter Jr. got the ball tipped by Banton, found himself trapped in the corner with Boucher coming over to help, and coughed it up yet again by swinging his elbows out to clear space. The Rockets literally couldn’t handle a middle school strategy.

Six — It’s becoming routine to see Siakam dominate. He is in such a rhythm where 20-point quarters and halves are just commonplace. Siakam did the bulk of his damage in the second quarter, exploding for 21 points on 9-for-10 shooting in the frame, including a three and two free throws, as he beat the Rockets literally every time down the floor. His post moves would make Rockets legend Hakeem Olajuwon proud, as he sent the current day Rockets swiping at his shadow as he got to the rim, and even towards the end, when the Rockets started to converge on him with double teams at the end of the clock, Siakam was still able to beat the coverage by spinning over his shoulder for a fallaway jumper that caught nothing but net. That push got the Raptors in front, and it kept them there for the rest of the night, even as Siakam’s evening was cut short due to foul trouble. Given the way the Rockets guarded him, Siakam could have gone for 50 in this game if he had a mind to it.

Seven — Flynn made the most of his extended run with VanVleet out. Flynn made three highlight jumpers, including two heavily contested stepback threes, and a slick crossover into a pull-up at the elbow, but what caught Nurse’s eye were the intangibles. Small things like being able to handle the press and bring the ball up safely, getting his team set up in their sets, being scrappy and helping on the glass, digging in and swiping in the post against players much bigger than him — those are the qualities that Nurse is asking from him. And while Flynn’s game is more predicated on scoring, Nurse has a firm standard for anyone who steps on the floor in terms of defensive effort, and Flynn matched it.

Eight — Birch had his longest run since undergoing nose surgery. He was able to play 17 minutes and collect perhaps the best play of the night where he crashed the glass for a rebound, and while falling over he threw a pass over his shoulder right to Anunoby in the shooting pocket for three in the fourth quarter. Birch specializes in the little things like screening effectively, extra efforts on the glass, and using his athleticism to collect stops on defense. He jumped the play to pick off a full-court pass, and chased down Porter Jr. from behind for an impressive swat.

Nine — Nurse will have to get even more creative in managing her lineups with the addition of Young at the trade deadline. Thaddeus Young gives Nurse four frontcourt players to choose from off the bench along with the existing trio of Birch, Boucher, and Precious Achiuwa. None of them provide consistent outside shooting, but they all hustle and defend at a high level. Odds are, Nurse won’t use all of them each night, but Young should slide ahead of Birch and perhaps even Achiuwa in the pecking order once he settles into his new team.

Ten — The Rockets were so bad defensively that they literally scored on themselves. At the end of the game, after the Raptors kindly took the turnover to end the game, all the Rockets needed to do was inbound and hold it for three seconds for the clock to run out. But instead, Porter Jr. decided to try a trick shot where he bounced it hard off the floor and it actually did trickle over the rim. Except, this was against his own basket, and there was still time left on the clock when it happened. The officials waved it off for some strange reason, even though Flynn did his very best to campaign for the two points since he touched it last.