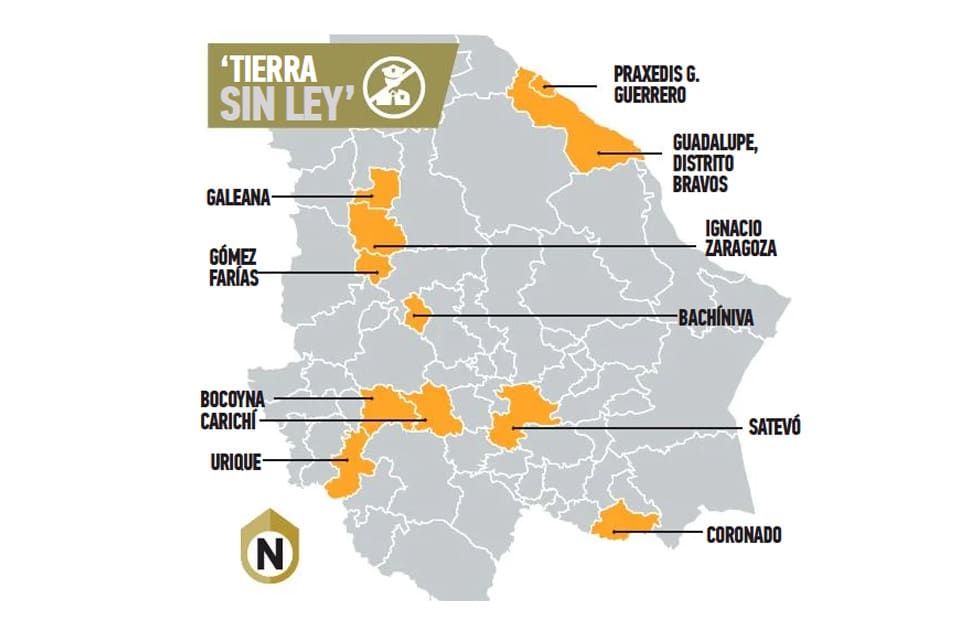 Security in these areas of state territory is currently guaranteed by state police personnel, with commissioned agents who carry out surveillance in replacement of local police elements.

Guadalupe and Praxedis G. Guerrero, based in the Valle de Juárez region, has not had a security element since 2010 after a series of violent acts in which several agents were killed and disappeared.

In Urich, where priests Javier Palma and Joaquin Mora were murdered, and whose municipal president is Daniel Silva Figueroa, state police removed 15 long arms and 42 short arms in recent months.

In August 2021 in Guadalupe y Calvo – governed by Julio César Chávez Ponce – state agents took away arms from 35 of the 40 elements that make up the municipal police.

Gilberto Loya, head of the state Public Security Secretariat, said that in municipalities that do not have police officers, the support of state elements is provided while they appoint local police officers to carry out these duties.

In towns close to the Sierra Tarahumara, such as in Bocoyna, a detachment was assigned for an entire area or region to cover even those municipalities that have preventive police but are mired in security problems. As a result, these state agents, in addition to being assigned to patrol mountain municipalities where there is no local public security, have to support some violent acts in adjacent municipalities.

they don’t rely on control

Loya had earlier said that the lack of municipal public safety elements is due to the fact that many have resigned and others were called for trust control but did not want to attend and others were discharged. Was.

The secretary explained that the presence of the municipal police in each town hall is essential, as they are responsible for the first contact with the citizens and must patrol in case of an emergency.

Other reasons elements may give up are because they have received threats from organized crime, because groups are fighting over territory, or when they have murdered one or more of their comrades.

Loya also noted that the state coordinates with municipalities that are in these situations and that they are supported by elements of the military or National Guard, but that municipalities should not ignore their responsibility to have local police. needed.

The state official confirmed that once these municipalities regularize their status and have elements of public safety, they can be supported with equipment from the uniforms and clothing required for their reinforcements.

On February 18, 2017, then-governor Javier Corral issued Agreement 080/2017, through which the state assumed “immediate and temporary” command of the municipalities of Madera, Temosachic, Gómez Farias, Ignacio Zaragoza, Casas, and the road and transit police. Grandes and Nuevo Casas Grandes, as a case of force majeure leading to a serious disturbance of public order.

A few weeks later, on April 1 of the same year, agreement number 086/2017 was officially issued, under which it “assumed immediately and temporarily the command of the Municipal Police and the Road and Traffic Police of the Municipality of Cuauhtémoc, Chih She goes.”, as a matter of force majeure in the event of serious disturbance of public order”.

During the said administration, the said municipalities remained in the same position which had ended the previous year.