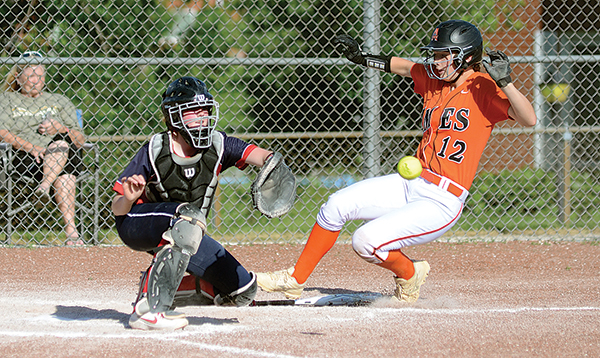 TR Photo by Ross Theed – Marshalltown High School eighth grade catcher Kinsale Bowie reels in a throw home as Olivia Swelly of Ames (12) scores during the first game of Tuesday’s CIML Iowa Conference softball doubleheader in MHS. Class 5A No. 15 Little Cyclones took both games by the run rule, 14–0 and 11–0.

Before it can start worrying about winning, the Marshalltown High School softball team must first find a way to score a run.

The Bobcats’ season win went to four games on Tuesday night after a pair of shutout defeats for Class 5A No. 15 Ames. The visiting Little Cyclones won 14–0 in four innings and 11–0 in five in the CIML Iowa Conference doubleheader at MHS Diamond.

Frustrated by the nature of the loss more than a one-off score, Bobcats head coach Jim Palmer put it simply for his players after the Twinbills.

“We can make a perfect pitch, play very good defense, but we can’t win the game if we don’t hit the ball,” Palmer said. “We had two hits out of two games, and you can’t win games like this. If we don’t move our bat, it’s going to be difficult for us to do anything.

“I’m a little disappointed with it because we’ve spent so much time on it this year and we’re very comfortable when we’re practicing and things are looking great. We get into the game and we get tense and we It’s late, we’re not on time.”

Marshalltown (0-4, 0-4) made itself even tougher by making a combined 14 errors in the doubleheader defeat, 10 of them in the first game alone. The opening game was greeted by a single home run for Ames leadoff batsman Eli Lynch, and the trend continued downward from there for the Bobcats.

Palmer turned to senior Avery Mull, but eight unearned runs could have been passed by anyone. Marshalltown made six errors in the top of third and Ames had four hits to run twice, making the game out of reach for senior pitcher Alexa Kopaska.

Only two of Ames’ 14 runs came to Augustine and Mull, who allowed a combined seven hits and seven walks.

“I felt something when we got to the ballpark today and I was watching a slack play at the JV (junior varsity) game,” Palmer said. “Our spirits weren’t very high. It’s the last week and a lot of these girls probably spent a lot of time studying, their mind was on their tests, but as I explained to them in our pregame meeting, school is over and there’s nothing you can do about it now. You have to drop it and come out of here and play the game.”

Marshalltown managed two hits in the second game, but no Bobcats baserunners went past the second in a 11–0, five-innings streak. Kopaska hit a six and allowed only one Kennedy Feldman single in three innings in the circle, and reliever Sidney Smalley allowed an every Mull single and then allowed Feldman to walk in his first two frames.

“Both games were in our defense, jeez, just too many errors,” Palmer said. “We gave him too many outs. We still have to play a lot better. It was up and down (the lineup), be it my seniors, for my freshmen, just very temporary games and those mistakes happen when you play temporary. ,

The Bobcats have some time to try to correct those misconceptions as they lock in until Monday’s doubleheader in Mason City.

TR Photo by Ross Theed – Marshalltown High School eighth grade catcher Kinsale Bowie reels in a throw home as Olivia Swelly of Ames (12) scores during the first game of Tuesday’s CIML Iowa Conference softball doubleheader in MHS. Class 5A No. 15 Little Cyclones took both games by the run rule, 14–0 and 11–0.

Fort Dodge – Class 2A No. 7 West Marshall baseball team made it to Newell-Fonda, but could not cross Fort…