18,000 tickets sold out in three hours to get the Three Kings into the stadium 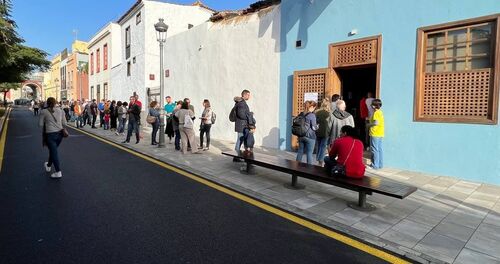 As always, the proceeds will go to groups based in Santa Cruz or to projects in the capital related to children, to which an estimated 36,000 euros will be distributed from the sale of seats.

18,000 tickets to attend the reception show of SSMM The Three Kings of the East at the Heliodoro Rodríguez López Stadium were sold out 3 hours after going on sale. The first box office to put up a “sold out” sign was in the South-West District, about 65 minutes after its doors opened, when the clock struck twenty-five to ten.

The councilor of Fiestas, Alfonso Cabello, expressed his satisfaction and admitted that “I was expecting a much faster sales time”, because “the boys and girls of Santa Cruz de Tenerife really want to get the three wise men”. where our tradition together and in the stadium”.

The mayor recalls that “right after the reception show ends in the stadium, the parade will begin along the traditional route”, “recommending patience and responsibility, a day in which Santa Cruz de Tenerife will bring together hundreds of thousands of people.” Streets.

Barely 20 minutes after sales ended in El Sobradillo, the same happened at facilities in the Ofra-Costa Sur district, which sold out tickets available at that time around 9:56 a.m. Anaga District concluded the sale at 10:15 am; Salud–La Salle and the stadium ticket office, together around 11:00 AM, and finally, Centro–Ifara, which kicked off the process at 11:30 AM.

Alfonso Cabello, counselor of the Fiestas, recalls that “as always, the collection of 18,000 tickets will be aimed at groups based in Santa Cruz de Tenerife or projects in the capital related to children.” In this sense, the mayor confirms that “a group of third sector organizations will share an estimated 36,000 euros from the sale of seats.”

For all these reasons, it is already a reality that a total of 18,000 people will meet this Thursday, the 5th, at the sporting venue of the capital to participate in the show organized by the Santa Cruz de Tenerife City Council through the Autonomous Organization of Fiestas. Recreational Activities (OAFAR).