2.7 million euro car: the new road Mercedes with the F1 engine has already been prepared 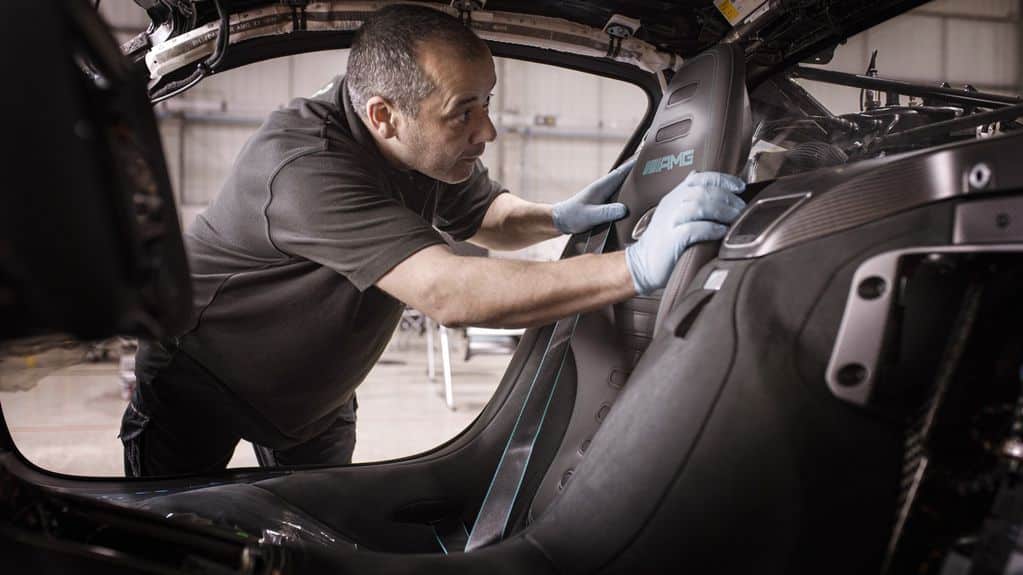 Almost five years after the debut of the Mercedes-AMG Project One, the long-awaited moment came: the German brand began production 275 units only Which would be the existence of an impressive road car with a Formula 1 engine.

Each example will be manufactured by hand in sixteen assembly and test stations at the plant in Coventry, United Kingdom. Description: they are all sold at the price €2.7 million,

once everything is up meticulous brand standardExterior panels are disassembled and painted by hand according to each customer’s specifications.

In the next step, Mercedes assembles a body-in-white and advanced Formula 1-derived powertrain. 1.6-litre turbocharged V6 And all four electric motors are individually hot-tested on test benches at Mercedes-AMG’s high-performance facility in Brixworth, the same location where F1 powertrains are built.

Once Every AMG One Is Built, Mercedes Will Test All Driving Modes on Rolling DynoBefore each unit is subjected to noise, vibration and hardness testing. A monsoon rain test is also conducted before the vehicle is taken to the light booth for final visual inspection and technical work tests.

Read Also:  Billions invested: this is how VW wants to finally exit its place in the US

Each car is then taken to a nearby certified ground where a driver will test each unit. Finally, the sports car will be taken Mercedes-AMG is headquartered in Affalterbach. is inGermany, where the delivery will take place to the customer.

How is Mercedes-AMG One

The Mercedes-AMG One looks almost identical to the 2017 concept car. Integrated roof air intake within the center finActive grille on the front fenders, lift-up doors and an active rear spoiler.

The rear end has been slightly relaxed with a more prominent lip above the LED taillights and some changes have been made to the diffuser which houses the rear bumpers. F1-inspired triple tailpipe, Other changes include removable carbon fiber engine cover, larger air intakes and larger rear view mirrors.

The most obvious change has to do with the new 10-spoke forged aluminum wheels With an aerodynamic carbon fiber cover. Those wheels are designed specifically for the One.

The hydraulically controlled active aerodynamics can be set in three different modes: “Highway”For normal use with the wings off, the front wings were extended and the rear spoiler removed; “narrow road”, which provides five times more downforce due to folded front wings, open wings, a fully extended rear spoiler and suspension reduced 37 mm front and 30 mm rear; You “Race Drs”, which reduces downforce by 20 percent at the touch of a button so you can overtake with ease. This feature is automatically deactivated when the driver applies the brakes or when lateral acceleration is detected.

Hybrid powertrain with combined output of 1,049 horsepower It consists of an internal combustion engine and four electric motors. The mid-mounted 1.6-liter V6 with electric turbo, four overhead camshafts, a rev limit of 11,000 rpm and direct injection comes from Mercedes’ F1 car. The combustion engine alone produces 566 horsepower, which is a huge figure for an engine with such a small capacity.

As for the electric motors, there is one mounted on the crankshaft that provides 161 hp, the other integrated into the turbocharger that delivers 121 hp on the front axle and twin motors that generate a combined 322 hp.

The rear axle of the sports car is hybrid with a new seven-speed automatic manual gearbox that integrates a limited-slip differential, while the front axle is powered exclusively by two electric motors.

In addition, the front electric motors allow up to 80 percent energy recovery during deceleration, helping to charge the high-performance lithium-ion battery, which has a direct cooling system.

Battery capacity 8.4 kWh. Is and allows for an electric range of 18.1 km, while it can be charged with the integrated 3.7 kW on-board charger.

AMG One: Equipment and Capabilities

Allows race start function Acceleration from 0-200 km/h in 7 seconds, As for the top speed, it is electronically limited to 352 km/h.

the wheels are covered with tires Michelin Pilot Sport Cup 2R M01 Custom built with a 285/35 ZR19 at the front and a 335/30 ZR20 at the rear. The AMG carbon fiber ceramic composite braking system comprises 398 mm front discs with six-piston calipers and 380 mm rear discs with four-piston calipers. All four discs are internally ventilated and perforated.

Creature comfort includes two USB ports, two separate 10-inch screens for the digital instrument cluster and center touchscreen, climate vents and a digital rearview mirror that displays real-time footage from the MirrorCam as there is no rear windshield .