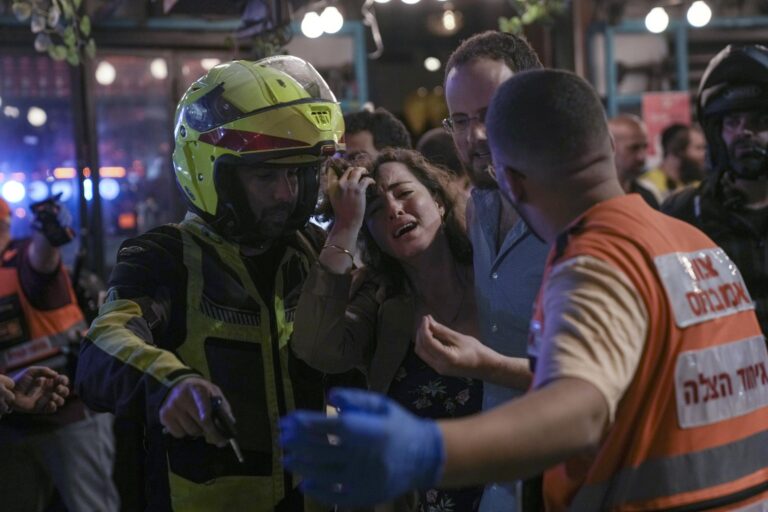 TEL AVIV, Israel ( Associated Press) – A Palestinian opened fire at a crowded bar in central Tel Aviv, killing at least two people and injuring several others. Officials said the attacker was a resident of the occupied West Bank and evaded police for hours before being killed in an encounter with security forces early Friday.

It was the fourth deadly attack in Israel by Palestinians in less than three weeks and came at a time of heightened tensions around the start of the Islamic holy month of Ramadan. Protests and clashes in Jerusalem during Ramadan last year eventually ignited the 11-day Gaza War.

The militant Hamas group, which rules the Gaza Strip, praised the attack but did not claim responsibility.

Israel’s Shin Bet security agency said they eventually surrounded the attacker at a mosque in the Jaffa neighborhood, where he was killed in a shootout.

“After a difficult night, and prolonged activity by the police, military and Shin Bet, we were successful this morning, through intelligence and operational cooperation, to close the circle and kill the terrorist in one shootout, Israeli police chief Kobi Shabtai said.

Thursday’s attack comes at the start of an Israeli weekend in the popular nightlife area. Medics described panic scenes, in which dozens of people fled after the shots were fired.

Israel’s Magan David Adom Emergency Service said two people aged about 30 years had died. Another seven people were injured, of whom three are in critical condition.

Eleven Israelis were killed in the previous three attacks, making it one of the deadliest waves of violence in years.

The shooting took place on Dizengoff Street, a central street where other attacks have taken place over the years. Most recently, an Israeli Arab citizen shot dead two Israelis in the street in January 2016 and injured several others.

The mosque is the third holiest site in Islam and is located on top of a hill that is the holiest site for Jews, who call it Temple Mount. The sacred site has long been a flashpoint for the Israeli-Palestinian violence.

Israel has worked to sideline the Palestinian issue In recent years, it has instead focused on forming alliances with Arab states against Iran. But the age-old struggle remains as unshakable as ever.

In the 1967 Middle East war, Israel occupied East Jerusalem, the West Bank and the Gaza Strip. Palestinians want all three regions to build their future state. The last real peace talks broke down more than a decade ago, and Israeli Prime Minister Naftali Bennett is opposed to the Palestinian state.

Israel annexed East Jerusalem in a move recognized internationally and considers the entire city as its capital. it is building and expanding ghetto In the occupied West Bank, which most of the international community considers illegal.

It withdrew soldiers and settlers from Gaza in 2005. But two years later, the militant Hamas group imposed a crippling blockade on the region, along with neighboring Egypt, after seizing power from rival Palestinian forces. Israel and Hamas have fought four wars since then.

Hamas spokesman Abdeltif al-Qanu said late Thursday that “the heroic attack in the heart of the (Israeli) unit has affected the Zionist security system and proved our people’s ability to inflict damage on the occupation.”

On March 29, a 27-year-old Palestinian from the West Bank shot and killed five people in the central city of Bnei Brak. Two days earlier, two police officers were killed in a gunfight by sympathizers of the Islamic State group in the central city of Hadera. A week ago in the southern city of Beersheba, an IS supporter killed four people after ramming into a car and stabbing them. The Hadera and Beersheba attacks were carried out by Palestinian citizens of Israel.