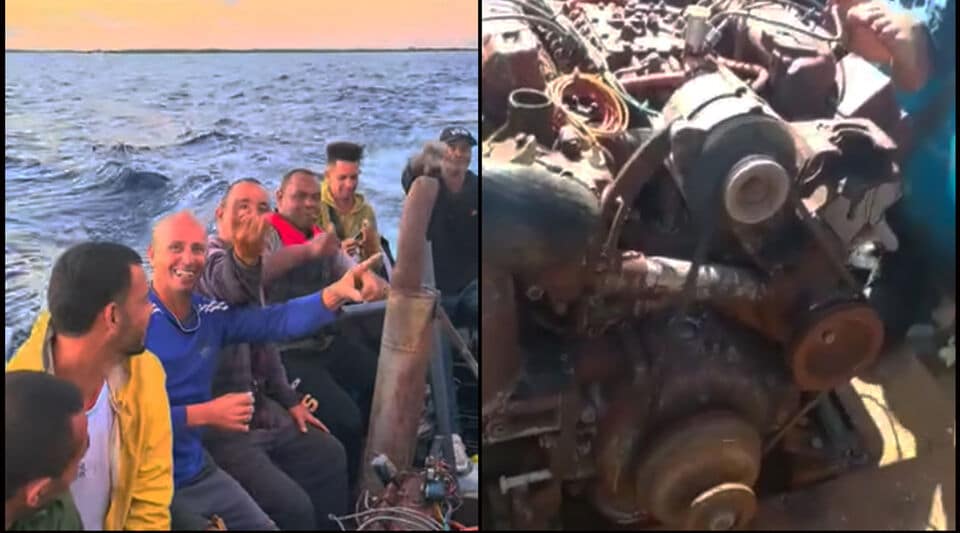 Cuba’s Leitian Cedre shared on Facebook last Saturday two videos of the journey of at least 20 rafters who managed to land in the Florida Strait after 19 hours of transference. He said, “I know that the brothers who could not come in this period will arrive and they will be able to get out of misery at any time.”

The rafters, originally from the province of Matanzas, set sail in “one of the best wilds to come out of Cárdenas,” Cedre announced. A diesel engine from a Russian KamAZ V8 type truck was adapted to power the fleet. This type of vehicle is used to transport sugarcane or goods on the island.

Cedre recommended to those who are about to leave Cuba, “put on the spirit and fight a little more so that they can see that everything has been achieved.” No further details were given about the rest of the group, while Rafter shared a second video of them refueling a boat, which he says will go fishing.

This Tuesday, the US Border Patrol detained 33 Cubans, seven women and 26 men, who managed to make landfall in the Florida Keys. Miami Area Chief Officer, Walter Slossar shared pictures of the two rafts When the migrants arrived.

Slossar has documented the arrival of 88 Cubans in his network so far in the last month of the year. Last Monday he reported two rustic boats in which 30 compatriots left the island. On Thursday, he commented on a raft with 25 people, including a child, coming from Matanzas entered the marathon,

As usual in these cases, rafters have the option of requesting asylum, which means demonstrating to an official or judge that their fear of being returned to their country is justified. If the Cuban convinces the relevant authorities, they are given a bond and can request asylum.

Many attempts to make the American dream a reality have been thwarted by the United States Coast Guard. this monday he was repatriated aboard the ship Paul Vaillant 126 for the Cubans. Lieutenant Paul Puddington warned patrols in the Florida Straits, Windward Passage and Mona Channel to “prevent the tragic loss of life from these dangerous and illegal sea voyages”.

According to official figures, maritime surveillance has made it possible to thwart the arrival of 2,755 Cubans in Florida over the past three months. The US agency detailed that last year they detained 6,182 rafters

Intercepted Cubans are returned to Cuba as part of a migration agreement between Washington and Havana, although on some occasions this does not proceed due to conditions of credible fear of returning to the island for repressive reasons. This is the case of 22 people, including activist Yilis Torres Cruz, who are in Guantanamo Base and waiting for asylum in a third country.

The migrant crisis the island is facing is above all happening over land. According to statistics from the US Department of Customs and Border Protection, 224,000 Cuban migrants arrived last year.

The route through the Rio Grande in the Mexican state of Coahuila to reach the United States remains a common route for the island’s citizens. On Monday, the chief officer of the Border Patrol in Valle Sector, Texas, Gloria Chavez, reported About the detention of “three groups of migrants” in the first four days of December, “a total of 420 migrants: 103 relatives, 56 unaccompanied children and 261 single adults from Cuba and several countries in Central and South America.”

Contribute to our work:

team of 14 Intervene He is committed to doing serious journalism that reflects the dark Cuban reality. Thank you for being with us on this long road. We invite you to continue supporting us, but this time by subscribing to our newsletter. Together we can continue to transform journalism in Cuba.