2022 Spring Preview: What does the running back room look like for the Sooners?

Spring is upon us, and that means spring practice for the Oklahoma football team. Spring practice won’t get underway until March 22 for the new look Sooners, who will head into the 2022 season under Brent Venables, who takes over after the departure of Lincoln Riley at the tail end of last season.

Venables is widely respected in all collegiate coaching circles for his character, passion, and defensive wizardry. It’s hard to imagine the Oklahoma Sooners struggling to become an elite defensive unit over time, considering Venables’ track record of late.

Lebby takes over a Sooners offense with plenty of talent in all the right spots but is trying to bounce back from a bumpy ride of the 2021 season. The offense navigated two different quarterbacks (neither of which is on the team anymore), offensive line struggles throughout the season, and their play-caller did them no favors either.

Lebby’s offense differs from Riley’s in a few different ways, but most notably, it differs in its usage of running backs and the run game when married with tempo. Riley slowed things down considerably, and with Lebby in charge, look for a lighting fast offense, reminiscent of Oklahoma’s Sam Bradford-led offenses.

Lebby goes fast, but his wear-n-shoot offense is a power running game with zone elements mixed in with the Air Raid as its foundation. For this offense to be at its best, running backs coach DeMarco Murray will have to have his room full of talented running backs ready to go.

Let’s look at what the Sooners will have in their running back room as we start spring ball. 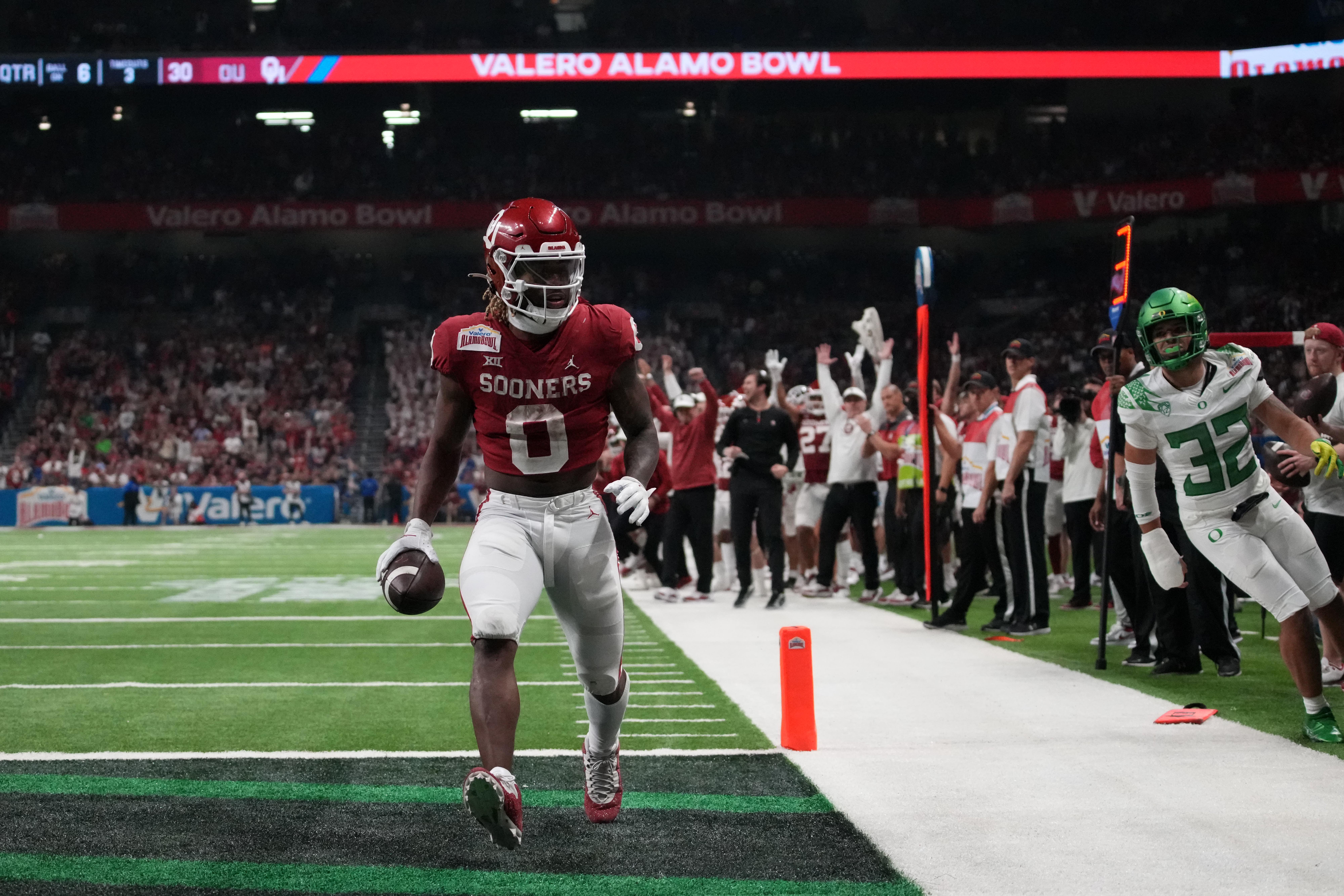 Kennedy Brooks logged one heck of a career for the Sooners. His time came to an end following one last scintillating performance in the Valero Alamo Bowl. Over his career, he amassed 3,320 rushing yards (seven yards per rush) and 31 touchdowns for the Sooners. He ran with an effortless style that was incredibly productive.

He put together three 1,000-yard seasons and was the model of consistency for the running back room during his time in Norman. Brooks was an extremely patient runner and his patience and vision more than made up for his perceived lack of speed. He put in his name in the NFL Draft and will look to see his name called in the NFL Draft in April. Eric Gray was his primary backup, and for 60 percent of the season, he and Brooks were the only scholarship running backs on the roster.

Gray returns for his second season in Crimson and Cream after transferring last winter from the Tennessee Volunteers.

His first year wasn’t as impactful as many thought it would be, but he is now the guy. He’ll have significantly more opportunities with Brooks gone, and in Lebby’s system should be able to showcase his pass-catching abilities as well.

His first couple of years at Tennessee showed he’s very capable as a lead back. He looks to regain that form in 2022. Gray has taken steps forward and seems to be embracing his role based on comments from DeMarco Murray ahead of spring ball. “We’re being led by Eric Gray and Marcus Major and adding a young guy like Jovantae Barnes, who brings a different dimension to our room,” Murray said. “Gavin Sawchuk will be here later on. These guys have picked (the offense) up and are holding their meetings being led by Eric Gray.”

Hey, if you’re reading this and thinking it’s still very thin, that’s because it is. Major is the only reserve running back on scholarship as Knowles and Hudson are both walk-ons.

The running back room looked similar in 2021 until Major became academically eligible after being forced to sit out during the summer.

Major has run hard when presented opportunities but he’ll have his heaviest workload yet as long as he’s able to play.

Knowles and Hudson are respected amongst their teammates and DeMarco Murray. Both were ready to do whatever was necessary while the Sooners operated with only two scholarship running backs for most of the 2021 season. They provide great practice bodies and can give Murray peace of mind if the depth becomes thin like it did in 2021.

Oklahoma signed two four-star running backs oozing with talent. Both are from the western part of the United States, and both bring dynamic abilities to the running back room.

Jovantae Barnes, a four-star running back out of Las Vegas, Nevada, offers a bit of everything. He can run between the tackles, catch the ball out of the backfield, and shows a willingness to stick his nose in and pass block. He has a near-perfect frame capable of adding more muscle and weight while still keeping his explosiveness. He enrolled early and has been on campus and participating in offseason workouts with the team. Murray spoke recently about how Barnes was adjusting to life at the collegiate level.

“He’s been an unbelievable kid, very smart. And just to have him here as a midyear has been extremely good just for him to get stronger, bigger, faster. Acclaimed to the offense, to school, time management. A lot of things that young guys struggle with. But he’s done an unbelievable job, and just hearing from different coaches, different players just every single day, every single week, he’s improving. But I’m excited to have Jovantae here, really, really excited. I obviously can’t wait to start spring ball with him to kind of move to that phase, on the football field phase. But we’re excited to have him,” Murray said.

The other new addition is Gavin Sawchuk, another four-star running back out of Littleton, Colorado. Sawchuk will add pure speed to the Sooners’ running back room, and it will be much needed as the Sooners have lacked a true burner in the backfield for quite some time. Sawchuk’s top-end speed and agility will immediately make him a possibility to see the field the moment he gets to campus this summer. Speed ​​kills, and you can never have too much of it on the field. It doesn’t take a rocket scientist to know that a running back that runs 60m in 6.69 seconds needs to find his way on the field.

Sawchuk is finishing his final high school track season and will join the squad this summer. Sawchuk figures to see the field in some capacity as a freshman. Whether its spot carries as a change of pace back or returning kicks, look for him to contribute his first year. 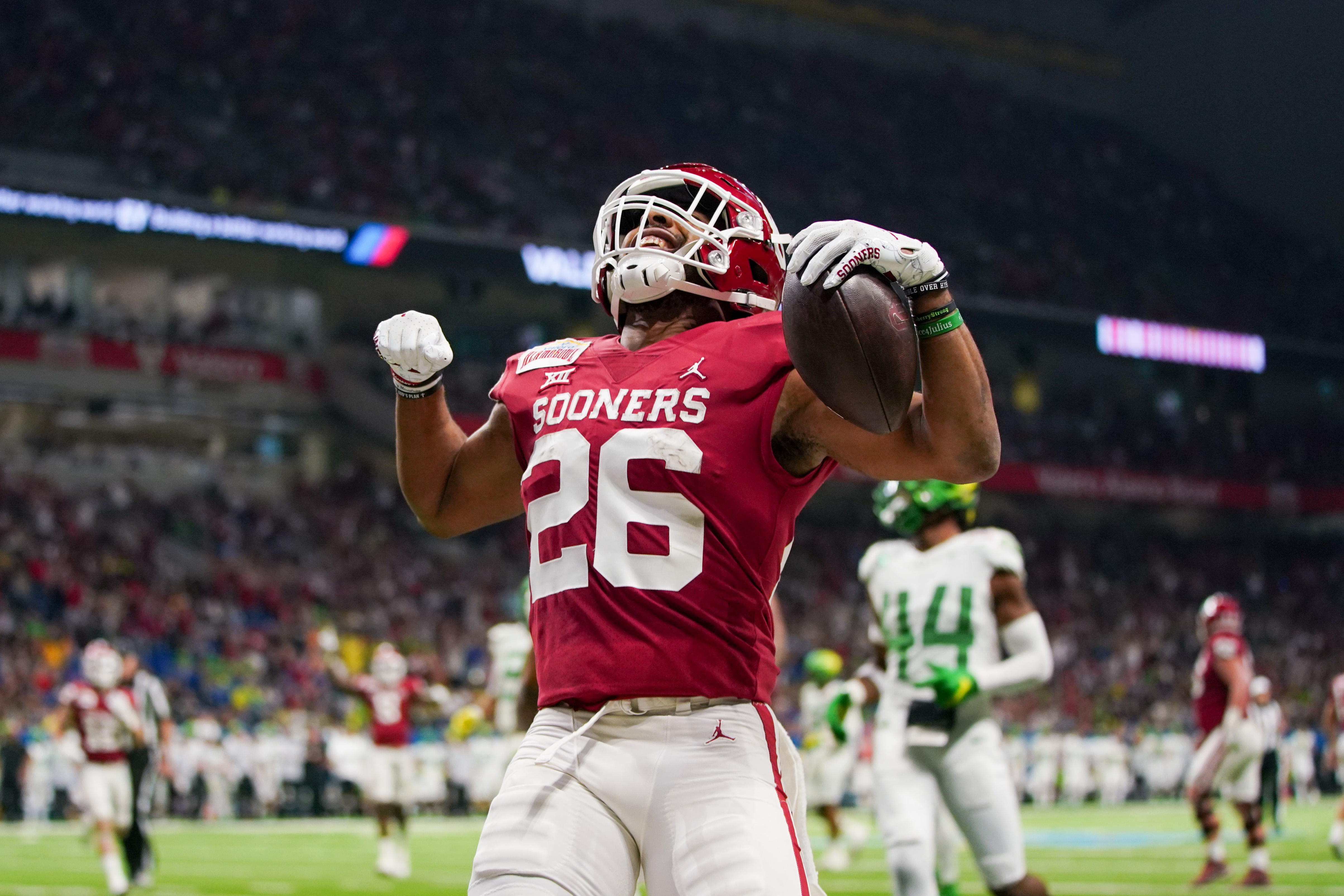 Dec 29, 2021; San Antonio, Texas, USA; Oklahoma Sooners running back Kennedy Brooks (26) celebrates a touchdown in the first quarter against the Oregon Ducks during the 2021 Alamo Bowl at the Alamodome. Daniel Dunn-USA TODAY Sports

Replacing Kennedy Brooks is at the top of the offensive checklist for spring and summer. Asking someone to replace three consecutive 1,000-yard seasons is no simple task. With a new offense to learn while replacing a couple of starters on the offensive line, replacing Brooks’ production will be a monumental task this offseason.

Brooks will head to play on Sundays, and Jeff Lebby and DeMarco Murray will spend many days figuring out how to put things together for this upcoming season.

Under the Radar Player

It may seem like cheating, but the two freshman running backs should be considered here. Both have dynamic skillsets and bring skills to the table the Sooners need. Plus, offensive coordinator Lebby likes to run the ball, and guys need to be fresh. With their innate talents and the need for fresh legs at the most taxing position on the field, look for both to have multiple moments in their freshmen seasons that make you say, “Wow!” 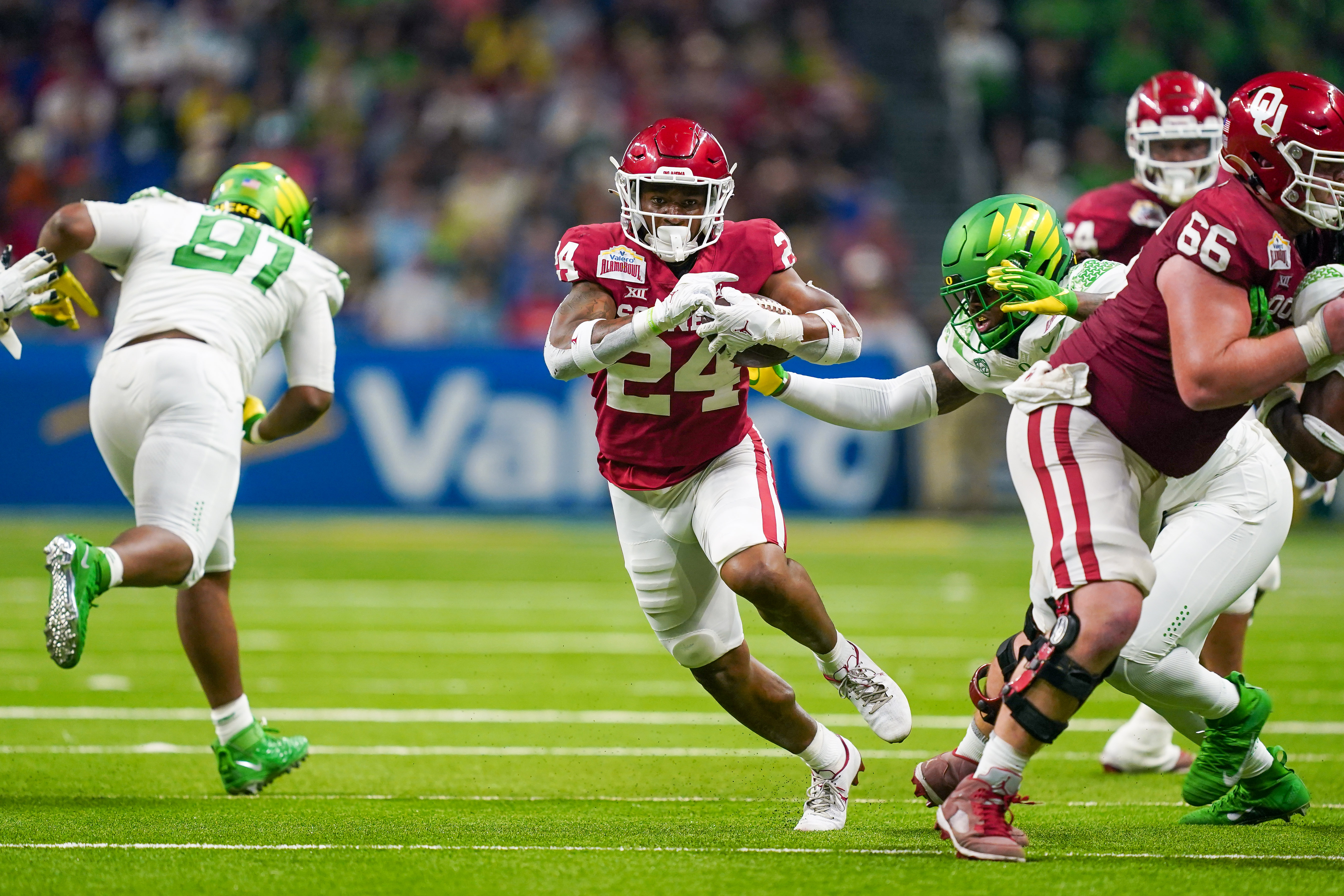 Dec 29, 2021; San Antonio, Texas, USA; Oklahoma Sooners running back Marcus Major (24) runs the ball against the Oregon Ducks during the second half of the 2021 Alamo Bowl at the Alamodome. Daniel Dunn-USA TODAY Sports

The battle for Eric Gray’s backup seems like the most important here. Major missed a lot of time with his ineligibility but has more experience than Barnes and Sawchuk. As previously mentioned, the youngsters bring some skills that shouldn’t be overlooked. This battle won’t be settled until Sawchuk joins the fray in summer but figures to be an excellent one with multiple worthy candidates.

“It wasn’t a mistake, I was very happy there” – Paul Pogba on his time at United

Lawsuit for rape against Cristiano Ronaldo dismissed in the United States