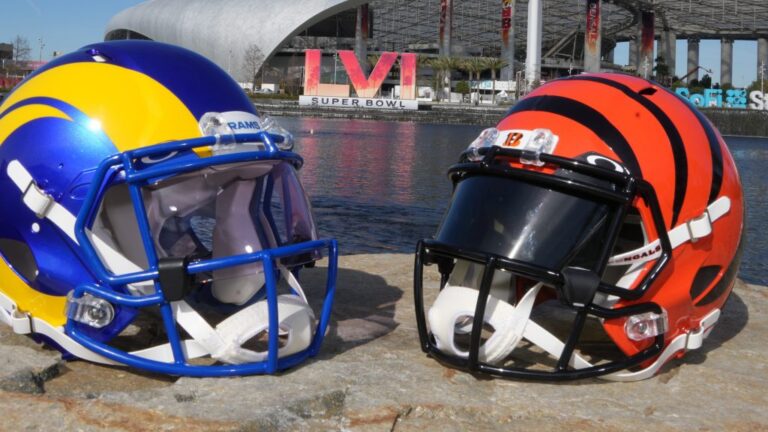 The longest season in NFL history will officially come to a close in Super Bowl LVI Sunday. The Los Angeles Rams will take on the Cincinnati Bengals to decide which team will hoist the Lombardi Trophy at SoFi Stadium. Kickoff will be at 6:30 pm ET from Inglewood, Calif., with the Bengals officially being the home team despite the game being played at the Rams’ stadium. Below, we look at the Rams vs. Bengals odds and linesand make our best NFL picks, predictions and bets.

The Rams were viewed as Super Bowl contenders from the moment they acquired QB Matthew Stafford in a trade with the Detroit Lions last January. Former QB Jared Goff wasn’t taking them where they needed to go, so they made a bold move to trade Goff to the Lions – along with three draft picks – for Stafford. The trade worked to perfection, landing the Rams in the Super Bowl in Stafford’s first season.

During the regular season, he threw 41 touchdowns and, despite co-leading the league in interceptions (17), he posted a passer rating of 102.9, the second-best of his career. Of course, he was helped by WR Cooper Kuppwho led the NFL in receptions (145), yards (1,947) and touchdown catches (16) this season.

The in-season additions of OLB Von Miller and WR Odell Beckham Jr. helped get the Rams to the Super Bowl, as did All-Pro performances from DT Aaron Donald and CB Jalen Ramsey, The Rams allowed 21.9 points per game, ranked third in sacks and only gave up 17 touchdown passes, second-fewest in the league.

On the other side, there are the Bengals, who don’t feature the star-studded roster that the Rams have. Yet, despite lacking big-name players, the Bengals still finished the season 10-7, won the AFC North and beat the Raiders, Titans and Chiefs in the postseason to reach Super Bowl LVI. They won fairly comfortably over the Raiders, but they snuck by the Titans and Chiefs with game-winning field goals by PK Evan McPherson to win each game by three points.

QB Joe Burrow returned from a torn ACL suffered during his rookie season and threw 34 touchdowns with 4,611 yards in 16 games. He won Associated Press Comeback Player of the Year for his remarkable season, but he wasn’t the only award-winner on the Bengals.

WR Ja’Marr Chase won Associated Press Offensive Rookie of the Year after his historic campaign, catching 81 passes for 1,455 yards and 13 touchdowns, breaking the record for the most receiving yards by a rookie in the Super Bowl era. WR Tee Higgins had 1,091 yards as the No. 2 wideout, while WR Tyler Boyd manned the slot with 828 yards of his own.

Defensively, the Bengals were only in the middle of the pack. They finished the regular season 17th in points allowed (22.1), but the defense is peaking at the right time. They held the Chiefs to only three points after halftime in the AFC title game and have given up only 59 points in three postseason games.

When looking at these two teams on paper, the Rams have a clear edge. They have a dominant defensive front compared to the Bengals’ porous offensive line, which allowed 16 pressures against the Chiefs in the AFC title game, according to Pro Football Focus. The Rams’ offensive line should hold up against the Bengals pass rush, too.

Covering Kupp will be a challenge for the likes of CB Mike Hilton and CB Eli Apple, with the same going for Beckham on the other side. Everything is pointing to the Rams in this one, but at -200, I can’t get myself to take Los Angeles.

In games that Burrow started, the Bengals were 5-1 straight up as underdogs of 3 points or more. There’s a chance they pull off another upset Sunday, which is why I’m going to PASS and instead bet on the spread.

The opening at -4.5 wasn’t terribly surprising given the construction of Los Angeles’ roster and with the game being played at its home stadium. Getting 4.5 points with the Bengals is awfully enticing, which initially helped drive the line down to 3.5 points.

The Over/Under has been nothing short of a toss-up in the Super Bowl. In the 54 Super Bowls where the Over/Under was set, it’s an even split at 27-27. In the last six Super Bowls, the Under has hit four times, including each of the last three.

The Rams and Bengals both averaged exactly 27.1 points per game this season, so mathematically, the Under has a slight edge with the total being 48.5 points. Although both teams could get off to a slow start due to the big-game jitters and magnitude of playing in the Super Bowl, these offenses will each find their rhythm.

Turnovers could also lead to short fields and easy points. Stafford led the NFL with 17 interceptions and Burrow threw 14 of his own, so I wouldn’t be surprised to see a couple of picks – and maybe even a pick-six.

If you’re looking for more sports betting picks and tips, access all of our content at SportsbookWire.com and BetFTW. Please gamble responsibly.

Gannett may earn revenue from Tipico for audience referrals to betting services. Tipico has no influence over nor are any such revenues in any way dependent on or linked to the newsrooms or news coverage. See Tipico.com for Terms and Conditions. 21+ only. Gambling problem? Call 1-800-GAMBLER (NJ), 1-800-522-4700 (CO), 1-800-BETS-OFF (IA).