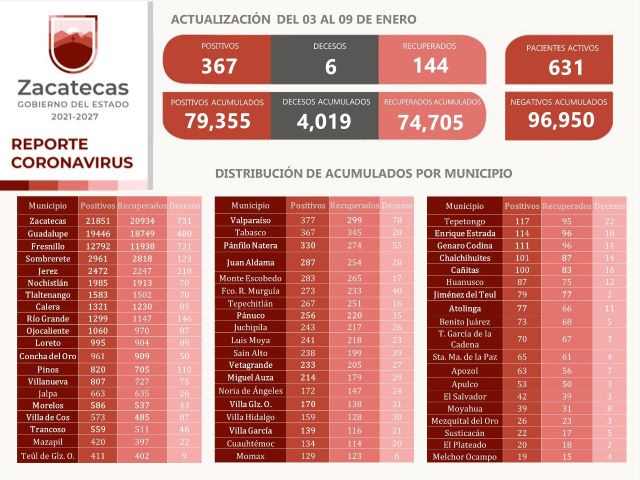 Zacatecas, Zach. The victims of the virus were five women and one man, aged between 39 and 90, four with co-morbidities such as diabetes, obesity, high blood pressure and Alzheimer’s.

Among those who achieved their recoveries last week were 50 people from the municipality of Zacatecas Capital, 44 from Guadalupe, 28 from Fresnillo, three per municipality in Sombrerete, Nochistlán and Morelos; two in Calera, Pinos and Villa de Cos; and the rest in Concepción del Oro, Valparaíso, Panuco, General Enrique Estrada, Chalchihuites, Cañitas de Felipe Pescador and Jimenez del Teul.

In addition, 367 new cases of COVID-19 and six deaths were reported in the past week, as reported by the Ministry of Health.

The agency pointed out that most of the patients who tested positive remain in home isolation; The age at recorded contagion ranged from one to 91 years.

Of the new positive cases, 114 were recorded in Zacatecas Municipality, 136 in Guadalupe, 47 in Fresnillo, 10 in Sombrerete and Tlaltenango, six in Rio Grande and Miguel Auza, five in Jerez and Juan Aldama, four in Pinos and Morelos . three in Calera and Ojocaliente, two in Villanueva, Trancoso and Nochistlán, and the rest in Loreto, Pánfilo Natera, Pánuco, Vetagrande, Villa González Ortega, Villa García, Genaro Codina and Atolinga.

With this, the state of Zacatecas has reached 79,355 positive cases since the beginning of the pandemic.

The Zacatecas Ministry of Health reported the deaths of six Zacatecans, five women and one man, aged between 39 and 90 years old, four of whom had co-morbidities such as diabetes, obesity, hypertension and Alzheimer’s.

One patient was cared for by Zacatecas Health Services and five by the Mexican Institute of Social Security (IMSS). By place of origin, the deceased were two from the municipality of Zacatecas, two from Guadalupe, one from Atolinga and one from Trancoso.

Since the start of the pandemic, the total number of people who have died due to complications of COVID-19 stands at 4,019.

The agency called on the people of Zacatecas not to give up on safety measures, asking people to frequently wash their hands, use face masks and antibacterial gel, as well as create a healthy distance.