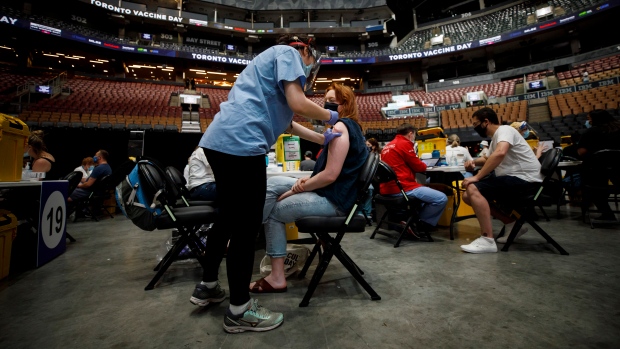 There is still a lot of work to be done to make sure Ontarians get a third COVID-19 vaccine, says scientific director of Ontario’s COVID-19 scientific advisory board, as discussion begins to mount around of the fourth dose.

“Although a lot of the conversation right now is around the fourth dose, to me, scientifically, the clearest opportunity, what we should be doing, and it’s not a question of availability, the vaccine is available to us, it’s that third dose.” Dr. Fahad Razak told CP24 on Monday.

His comments come as opposition parties in Ontario are calling for the fourth dose to be expanded in the province, as Quebec has now, ahead of a possible fall wave.

But according to the latest vaccination data released by the province, only 57 percent of those over the age of 12 have received a third dose, despite wide availability in the province.

“That third dose, that’s the dose that clearly gives you the most protection not only against infection, but also against severe disease. And serious illness is what matters most to us,” Razak said. “So there’s a huge number of people in Ontario right now who are eligible for that third dose who haven’t gotten it.”

Ontario began rolling out third doses in November and expanded eligibility to anyone over the age of 18 at the end of December. However, uptake of the third dose was disappointing, and Ontarians have been slow to get vaccinated.

While some people have indicated they don’t want to get more than the first two doses originally prescribed, Razak said the advice on how many injections are needed has changed as the pandemic has progressed and the virus has changed.

“The virus has proven to be a really terrible adversary for us,” Razak said. “And it has mutated to the extent that what is currently circulating in Ontario, Canada and the world is almost unrecognizable compared to what we originally saw and developed vaccines against.

“And so these ever-increasing rounds of vaccination come out because we’re doing the best we can to protect ourselves against a mutating virus.”

However, he added that newer vaccines show promise in providing better protection against the latest strains of the virus.

“What will happen in the future is not very clear. One of the things that is very promising is vaccines that are being tailored and developed against what is circulating now, as opposed to what was in place two years ago when the virus first emerged in China,” Razak said. “So there is hope that these newer generations of vaccines, especially, will give us longer-lasting protection.”

He said that in the meantime, and especially heading into the fall when there will be other respiratory illnesses circulating, it makes sense to get the vaccines you’re eligible for and still think about wearing a mask in high-risk settings to avoid infection.