$4,400. Traveling to the US is 11.1% more expensive than at the beginning of the year with more dollars

With an increase in the registered exchange rate from the end of JuneImported products, ant expenses and trips to the United States have become more expensive than at the beginning of the year, when a dollar cost $3,981.16.

The currency’s price in the country also hit a historic high of $4,627.46 on July 13, and remains in the range between $4,200 and $4,470. In addition to the local political situation, the price continues to depend on announcements from the world’s central banks about raising their interest rates to control inflation.

Thus, now all purchases made in dollars while traveling to the United States will be 11.1% more expensive than at the beginning of the year, if the current TRM is taken into account today ($4,422.77).

If you want to fly to a destination like Los Angeles during the break week of October, you can get tickets for the trip on the 10th of that month for around US$501. Doing the accounts in local currency, what would have cost $1.99 million at the beginning of the year is about $2.21 million today. 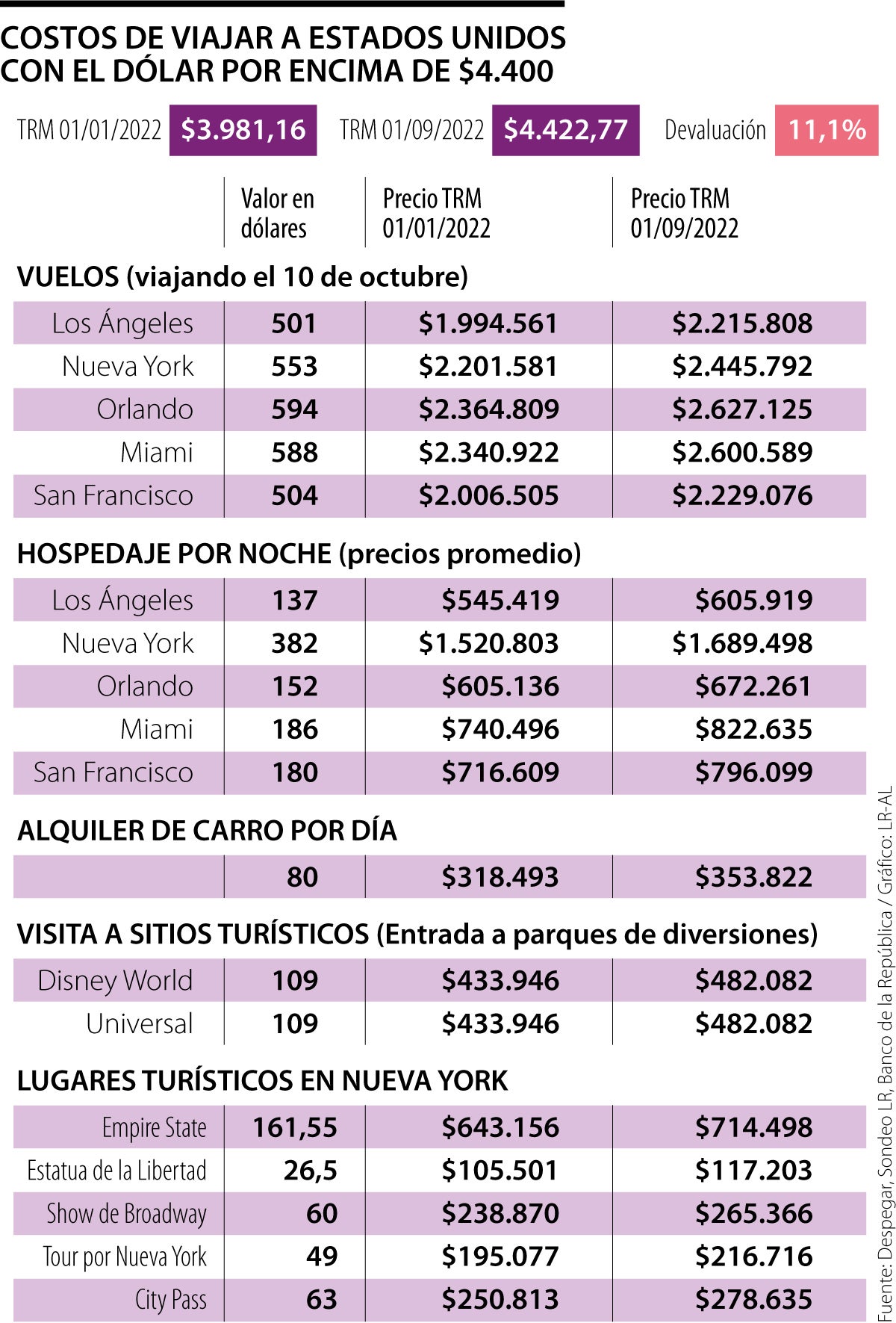 Another expense you will have to incur is accommodation or accommodation, which also increases in each city, if you account in the local currency. At the beginning of the year, cities such as Orlando offered hotel nights from $605,000. Today, with the devaluation of the Colombian peso, the rate does not fall below $672,000 and can even go up to $1.6 million depending on the destination.

If you need a car to rent and travel around the area in cities like Miami, Orlando and Los Angeles, the average price for a vehicle per day is US$80. In local currency, in January they had to pay $318,493 per day in rent, but today that figure has risen to $353,822.

One expense that cannot be missed on trips is tourism, visiting the most emblematic areas of cities. The cost of admission to Disney and Universal amusement parks was $433,946; Currently, a standard ticket can reach $482,082, given that the price in dollars is US$109 for a day. Tourist attractions such as the Empire State or the Statue of Liberty cost between $714,498 and $117,203.

Now more than ever you should take care of your personal finances if you are planning to travel, as according to experts, the dollar may remain above $4,400.

“It is expected that it will remain above $4,400. The recommendations are that, despite the fact that we are at a higher level, it is also good to hedge if imports are being made or in terms of savings. It is recommended to do so in dollars and take advantage of the higher investment rates suggested in CDTs”, commented Jose Luis Hernández, an institutional desk trader at Corficolombiana.

On the other hand, Felipe Campos, manager of investment and research at Alianza, said that “we are experiencing an episode of global recession in which the dollar rises a lot or a little, depending on the internal conditions of each country.” He added that a key element of the recession is that it has no lasting impact and that if the dollar reaches $4,800, it will not stay at that level for long.