50 Years of Watergate: A President-Topling Scandal Triggered by a Tape 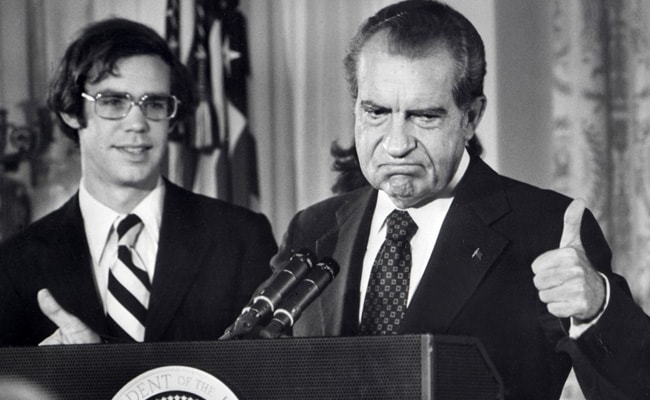 It all began when a vigilant night watchman saw a piece of tape on the door of the building where the Democratic National Committee headquarters was located in Washington in June 1972.

Calling the police, he started the Watergate scandal, the only American leader to resign from the presidency of Richard Nixon.

It turned out that the tapes were kept during the break-in by five people tasked with holding microphones and taking pictures of documents to find compromising information on Nixon’s opponents by officials with ties to the White House. went.

tape on a door

On the night of June 16-17, 24-year-old security guard Frank Wills was circling the Watergate Bulling Complex when he noticed tape on a door that prevented it from closing.

At first, they did not worry, removed it and continued to work.

But when he returned, he had the tape, which made him suspect that there was a sabotage. Wills — who plays himself for a few seconds at the start of the movie “All the President’s Men,” which takes the saga forward — immediately called the police.

“Found tape at door. Call police to inspect,” he wrote in a building security officer’s log, which is preserved by the US National Archives.

Police officers arrived at the scene within “a minute, a half-minute,” one of them, John Barrett, told ABC News in 2017.

He and fellow officer Paul Leiper were dressed in plain clothes, and were also a little crooked.

This worked in her favor, as Alfred Baldwin, the man who was supposed to keep watch during the break-in, didn’t notice her immediately. His attention may have been focused on the film “Attack of the Puppet People”, which was being shown on TV.

“He was glued to the TV set,” and by the time he warned the others, “it was too late and he had to run and hide like rats,” Barrett said.

‘Come out with your hands up’

Once inside the office, the two officers found tapes on several doors, realizing that something was amiss.

They found the looted offices and suspected that the criminals were still there, and started searching them room-by-room.

Suddenly, Barrett saw a hand. “It scared the living beezies out of me,” he said.

“I shout something to the effect of, ‘Come out with your hands or I’ll blow your head.'”

“Ten hands went up, and they came out, and that’s where the arrest happened,” Barrett said.

Across the street, Baldwin’s ear was from a walkie-talkie. “In a very soft whisper, I heard a voice: They’ve got us,” he said.

Police soon realized it was “not your typical, typical theft,” Barrett said.

He said that not only were the thieves wearing suits and ties, but they also had bugging devices, tear gas pens, several rolls of film, locksmithing devices, and hundreds of thousands of dollar bills.

On June 18, The Washington Post published its first article on the subject. This was outlined to Alfred E Lewis, a reporter covering the police. But eventually its list of contributors also included the names of Bob Woodward and Carl Bernstein.

Two young journalists took charge while investigating the details of the case that toppled Nixon’s presidency two years later and won the coveted Pulitzer Prize for their work.

Even Republicans Can Be Elizabethans

Nobel Prize Winner Stiglitz: “The United States Is On The Path Of Fascism”

Nobel Prize Winner Stiglitz: “The United States Is On The Path Of Fascism”

With a surprisingly large majority: the United States and Italy agree to join NATO, Sweden and Finland

Ex-Republicans and Democrats get new party