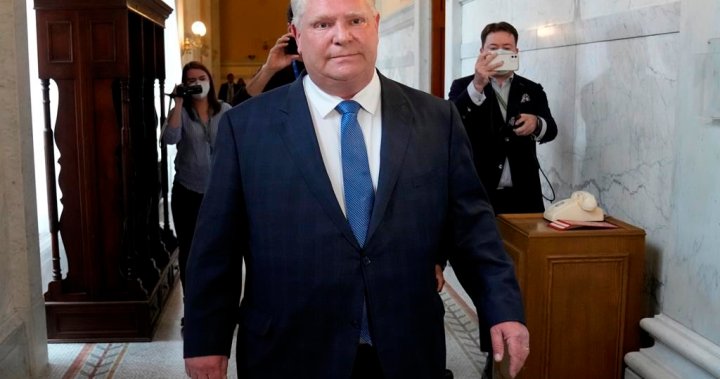 Eight Ontario Progressive Conservative MPPs received allowances from their riding associations over the past four years for a variety of expenses including child care, entertainment and vehicle costs, raising new questions about how the party spends donations and taxpayer subsidies.

After the issue was first raised by the Ontario NDP, Global News combed through publicly available Elections Ontario data looking into the expenses incurred by all 124 sitting MPPs and discovered tens of thousands of payments made to select politicians between 2018 and 2021 that fell outside of the routine expenses claimed by riding associations.

While the vast majority of riding associations typically expensed items related to community events, personal protective equipment and even iPads for long-term care homes, eight PC MPPs received money for housing, meals and entertainment, according to the Elections Ontario filings, and some received an “MPP allowance” on top of their tax-payer funded salaries.

In a statement to Global News, the PC party defended the allowances given to all MPPs, but did not answer questions about the ethical nature of the expenditures or whether the members would be expected to pay back the funds.

Topping the list is Lisa Macleod, MPP for the riding of Nepean, who served as the former minister of Children, Community and Social Service and Tourism Culture and Sport earning a salary of $165,851 in 2021.

Mississauga East-Cooksville candidate Kaleed Rasheed, who served as the Associate Minister of Digital Government, was given a total of $23,000 in allowances from the PC riding association bank account.

According to public filings with Elections Ontario, Rasheed received $11,000 in 2019 and $12,000 in 2020 from the riding association while, at the same time, being paid more than $130,000 as an MPP and as chair of a legislative committee. The payments are simply listed as “MPP allowance” with no further breakdown of how those funds were used.

Another cabinet minister, Greg Rickford from the Kenora Rainy-River riding, expensed a total of $14,640 since 2019 that the riding association listed as “MPP expense allowance” and “MPP car allowance.”

Barrie-Innisfil MPP Andrea Khanjin received an “MPP allowance” in 2019 and 2020 totaling $6,500, while Mississauga-Lakeshore MPP Rudy Cuzzetto was given a total of $5,631 since 2019 under a line item called “MPP expenses.”

Belinda Karahalios, who represented the Ontario PCs in Cambridge until 2020 when she was removed from the party by Doug Ford, was paid $1,139 by the riding association in 2019 for “MPP child care expenses.”

“MPPs have salaries that are in the top 10 per cent, earning more than 90 per cent of voters in Ontario and this is an obscure, secretive way of giving them more money,” Conacher said. “I don’t think donors donate to parties to have their money passed on to wealthy politicians.”

Conacher said, in comparison, members of Parliament are bound by ethics rules that forbid them from receiving top-up from riding associations — a rule he believes should extend to their provincial counterparts as well.

“MPPs have travel allowances and housing allowances if they’re outside of Toronto and that’s part of their pay, but to have another allowance on top of that is prohibited at the federal level and it should be prohibited in Ontario as well.”

UN Secretary General to meet Putin in Moscow on 26 April