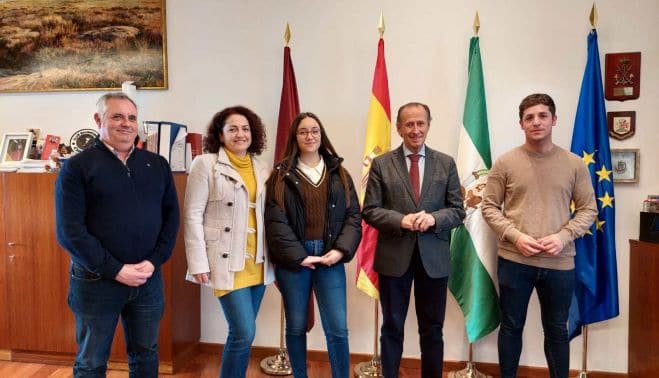 The Mayor of Chiclana, José María Roman, welcomes IES Huerta del Rosario student Miriam Avila Crespo, who has recently been selected for the Amancio Ortega Foundation Scholarship Program. A project that selects the best fourth year ESO students to study the first year of the Baccalaureate in Canada.

During the meeting, which was also attended by the municipal education representative, José Alberto Cruz, and the parents of the student from Chiclana, the mayor emphasized that “today we have the honor of receiving Miriam Avila, who at the last moment has donated to the Amancio Ortega Foundation He applied for a scholarship from the University of Toronto and was granted it, so he would do the Baccalaureate in Canada. José María Roman commented, “This is a living example of when someone takes education for what it is and parents support it.” Huh.”

“It’s a great opportunity to train her not only in the language, but also as a person, because she’ll go at a very young age and be able to come away with a brash maturity and autonomy,” the councilor said. He can score the direction of what he wants to do”. “In short, this is an example for many young people who are under the illusion of achieving something that they are passionate about and that inspires them,” he said.

Miriam Avila, on her part, indicated that “at first I didn’t think they were going to give it to me, because you have to have a level. But I wanted to and I was excited and it can be achieved, so We should not give up, even though there are many applicants in Spain. Chiclana student said, “To be able to use this scholarship, they ask you to have an average grade above 7, so you have to have good grades And have to worry about that.” Really want to go.” “It is a great opportunity that the Foundation enables us to study abroad, for which I would like to publicly thank you”, he remarked.