A timeline of their ‘Spider-Man’ romance 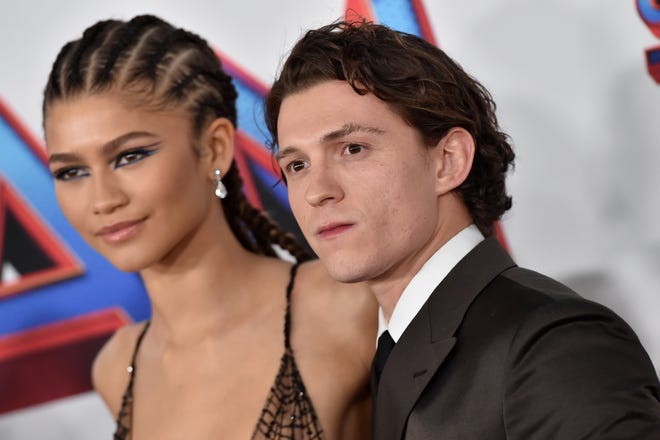 Any time photos of Zendaya and Tom Holland drop, the internet recirculates the images for days with #relationshipgoals chatter.

While their friendship was established after first working together on 2017’s “Spider-Man: Homecoming,” rumors swirled that they were more than just friends and co-stars.

But in the past year, the foggy lines of their relationship became crystal clear during the rollout of their second film together, “Spider-Man: No Way Home.” With Instagram shoutouts, red carpet appearances and paparazzi lenses on their romantic date nights, the “Dune” actress and “Uncharted” actor seem to be never far apart.

Holland told USA TODAY in December the couple always gets attention when they go out, noting how a New York City outing gathered an audience of “like 15 people.”

“That’s never going to feel normal and it’s always going to make me feel funny, but we’re doing it together,” Holland said.

We’re taking a look at all the sweet moments between the co-stars since the “My MJ” and the “My Spider-Man” tribute posts.

‘My Mate’: Tom Holland and Zendaya keep it friendly

Zendaya and Holland have both made appearances on each other’s Instagrams as early as 2016 with photos from Comic-Con as they promoted “Spider-Man: Homecoming.” The friendship was established with several birthday posts shared between the two.

“Happy birthday man … (you) deserve every bit of the amazing stuff coming your way. @tomholland2013,” Zendaya wrote to her future significant other in 2017.

The same year Holland wished Zendaya a happy 21st on Instagram in September by simply calling her “mate,” adding “miss you and I’ll have a drink for you.”

Amid all the press for their joint Spider-Man movie, the two also appeared on “Lip Sync Battle” with Holland singing Rihanna’s classic song “Umbrella” and Zendaya honing in on her inner Bruno Mars with “24K Magic.”

“He’s a great dude. He’s literally one of my best friends,” Zendaya told Variety in 2017.

“Spider-Man: Homecoming” chatter surrounding their romance quieted as the two built their acting and modeling careers for the next few years.

Zendaya was seen in 2017’s “The Greatest Showman,” starred in more seasons of Disney Channel’s “KC Undercover” before it ended in 2018, fronted a global campaign for Lancôme’s Idole fragrance and beauty line and started to align herself with the popular HBO series ” Euphoria.”

‘Euphoria’:nudity, controversies make viewers uncomfortable – but not enough to turn it off

Tom Holland was hard at work carrying on his Spider-Man role into “Avengers: Infinity War” in 2018, “Avengers: Endgame” in 2019.

The future couple worked together again for “Spider-Man: Far From Home” in 2019.

Before working together again for their third “Spider-Man” hit, Holland voiced for Disney’s “Onward” in 2020, while Zendaya worked on “Malcolm & Marie” and voiced for Lola Bunny in “Space Jam: A New Legacy.”

Review:Zendaya, John David Washington do what they can in a lacking ‘Malcolm & Marie’

While developing their careers apart, their worlds collided again in preparation for 2021’s “No Way Home.”

During the summer of 2021, Page Six published paparazzi photos of the two kissing in a car.

Holland opened up their relationship to the world when he posted a photo of the two on set for “Spider-Man: No Way Home” to wish the “Euphoria” star a happy birthday, writing, “My MJ, have the happiest of birthdays . Gimme a call when your (sic) up.”

Months later, after posting solo shots of Zendaya for several red carpet moments on his Instagram, Holland acknowledged the kissing photo in an interview with GQ, saying both he and Zendaya felt “robbed” of their privacy.

“One of the downsides of our fame is that privacy isn’t really in our control anymore, and a moment that you think is between two people that love each other very much is now a moment that is shared with the entire world,” Holland said.

Days before the premiere of “No Way Home,” Zendaya returned Holland’s earlier Instagram-official admiration writing, “My Spider-Man, I’m so proud of you, some things never change and good thing.”

Zendaya and Tom Holland wow as a red carpet couple

Once the press tour for “Spider-Man: No Way Home” was underway in the last few months of 2021, so was the couple’s red carpet debut.

In the December USA TODAY interview, Holland said Zendaya has been “really instrumental in the sanity that I have right now and the fact that I have not lost my mind. It’s an interesting life.”

Now that Zendaya and Holland have sealed their romance in the public eye, the two have been captured while going on dates wearing each other’s name on the back of hockey jerseys and sporting seemingly perfect hair while wearing sleek outfits in New York City.

During the premiere of Holland’s latest movie “Uncharted,” social media put their names on the trending list by commenting on their “hot” weekend date nights.

“Tom and zendaya’s matching hockey jerseys has literally devastated me… i didn’t even realize i cared about them like that and here i am unable to move on from it,” @jceypotter tweeted.

“Tom & Zendaya holding hands on date night is all we’ve ever wanted,” The podcast account was written by @ChicksInTheOff.

Another user compared their date nights to an episode of “One on One” when two of the show’s characters wore matching sweatsuits.

“the POWER tom holland and zendaya hold? WHY ARE THEY SO HOTTTTT,” another user wrote.

“Zendaya and Tom Holland are the 2022 it couple,” @sourcandygum tweeted.