Aaron Donald plans to ‘run it back’ 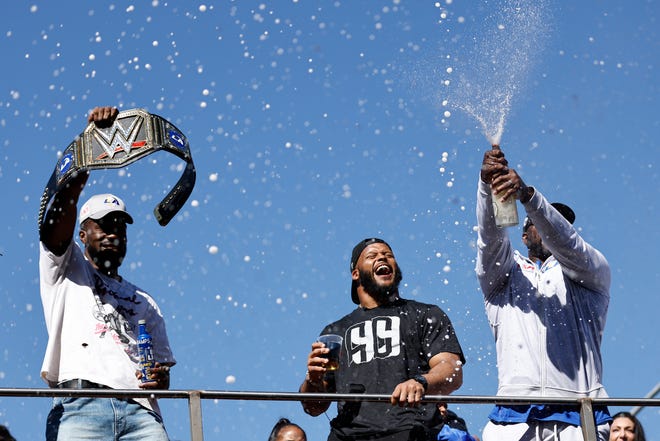 LOS ANGELES – Speculation over the possible retirement of Aaron Donald and Sean McVay seemingly faded Wednesday during the Los Angeles Rams’ public rally, which finished at the Los Angeles Memorial Coliseum, in celebration of their Super Bowl 56 victory.

McVay, the Rams’ head coach, started chants of “run it back,” and then it was time to hear from the players.

Donald, the star defensive lineman who clinched the victory? Apparently ready to “run it back.”

Rams outside linebacker Von Miller, a pending free agent? Count him in, too.

On the day of the Rams’ parade and rally, it was the central theme: Key members of the team that defeated the Cincinnati Bengals for the team’s first Super Bowl title in Los Angeles wanting to pursue back-to-back championships.

When asked after the Super Bowl victory if he planned to return to the team, McVay said, “We’ll see.”

A shirtless Donald, who after the Super Bowl did not deny the possibility of retiring, told the crowd after McVay egged him on, “We built a super team. We can bring a super team back. We can run it back.”

“He set the standard,” Kupp said of Bryant, who led the Lakers to five NBA titles. “All I know, let’s get back to work and run it back.”

General manager Les Snead, who last year added to his reputation for trading premium draft picks in exchange for star veterans when he acquired quarterback Matthew Stafford and Miller, embraced a popular meme of himself. The front of his T-shirt showed a black-and-white picture of his face with the text, “Eff picks them,” which he also said while speaking at the parade’s endpoint.

”We’ll use them to win another Super Bowl,” he said.

One key member of the Rams who declined to address his future was left tackle Andrew Whitworth, who at 40 is the oldest active player in the NFL.

“We’ll save that conversation for another day,” he said.

It was a festive rally with blizzards of blue and yellow confetti and the players spraying the VIP section with alcohol – and clearly consuming a lot of it, too.

Stafford, McVay and Miller were among the team members who let fly with profanity while addressing the crowd.

With a grin as oversized as some of the champagne bottles, Donald encouraged the crowd to “drink as much as we do” and celebrate.