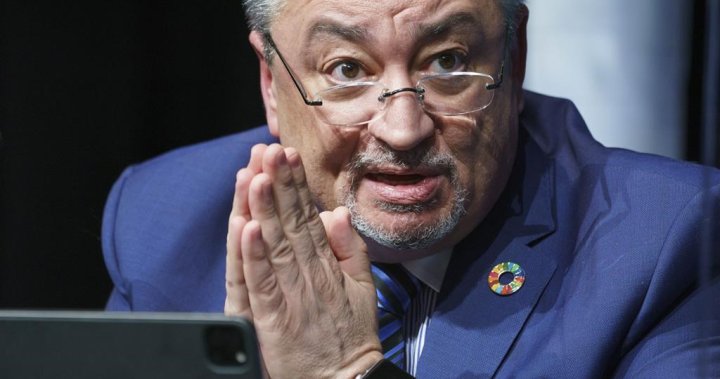 Quebec’s three main opposition parties and the province’s college of physicians are calling for the next public health director to be more independent from Premier François Legault.

Dr. Horacio Arruda resigned as public health director on Monday, after the Quebec government faced weeks of criticism from the opposition and pundits for its handling of the latest wave of COVID-19.

Quebec’s health-care system is under enormous stress from the rapidly rising number of COVID-19 patients, and the latest restrictions — including a 10 pm to 5 am curfew — are some of the most strict in the country.

The opposition has said Arruda, who usually appeared in public alongside Health Minister Christian Dubé and Legault and whose advice to the government was often delivered orally behind closed doors, was too close to political decision makers.

5:56
Legault thanks public health director Arruda for work after resignation

Québec solidaire issued a statement on Tuesday calling for the government to include opposition parties in the process to name Arruda’s replacement. The Parti Québécois said Tuesday that the recommendations of the next public health director should be made public.

“The last 22 months have shown us collectively how important it is for Quebec to have an independent public health director who can manage the crisis while keeping an arm’s length distance from government decisions,” Québec solidaire said in a news release.

That position was echoed by the College des médecins du Quebec, which said on Twitter Tuesday that Quebecers would be more likely to follow public health directives if the office of the public director was more independent from elected officials.

Opposition Leader Dominique Anglade, however, said she didn’t expect anything to change when Arruda is replaced.

“The departure of Dr. Arruda won’t resolve anything,” she wrote on Twitter Monday. “The decisions are made by the premier and should be based on science and not on polls and his intuition.”

Earlier Tuesday, Quebec reported 62 more deaths attributed to the novel coronavirus, pushing the total number of people killed by COVID-19 in the province to 12,028, the most in Canada.

The Health Department said COVID-19-related hospitalizations rose by 188, to 2,742, after 433 people were admitted to hospital in the previous 24 hours and 245 were discharged. The number of people in intensive care rose by seven, to 255.