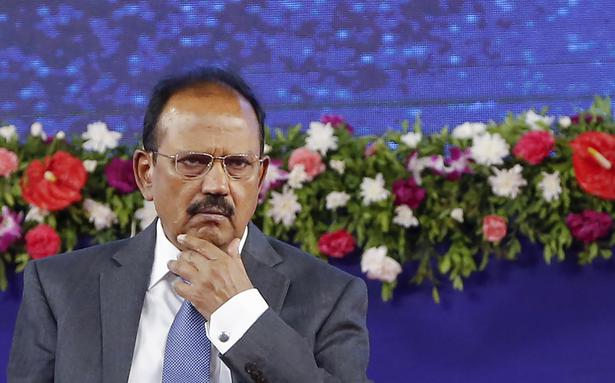 An official statement said that “multilateralism and global governance, new threats and challenges to national security, and governance in new domains” were on the agenda for discussion.

Significantly, the NSA meeting was one of two multilateral events that India and China participated in on a day that took place two years after the Galwan conflict along the Line of Actual Control (LAC). On Wednesday, New Delhi also hosted the Border Security Conference of SCO (Shanghai Cooperation Organisation) countries, which included officials from China, Russia, Pakistan and Central Asian countries.

“With the profound changes in the international landscape associated with a pandemic in a century, our world has entered a new phase of unrest and change,” Chinese Foreign Ministry spokesman Wang Wenbin said on Wednesday. Will work with BRICS members. Further strengthen political mutual trust, deepen political and security cooperation, uphold the security and development interests of the five countries, and contribute to world peace and stability.

The virtual meeting took place a week before the BRICS summit on June 24, hosted by Chinese President Xi Jinping, in which Prime Minister Narendra Modi will participate along with Russian President Vladimir Putin and leaders of Brazil and South Africa.

This will be the first BRICS summit since the Russian invasion of Ukraine on February 24 this year, and will be closely watched for discussion between the leaders. On Wednesday, Mr. Xi spoke to Mr. Putin, reaffirming China’s “mutual support” for “sovereignty and security”. Prime Minister Narendra Modi has also spoken to President Putin on telephone several times since the start of the conflict, but this will be the first time that the three leaders will be on a common platform with Brazilian President Bolsonaro and South African President Ramaphosa. , albeit in fact.

Meanwhile, the Border Security Force hosted the 21st meeting of the Expert Group and the 8th meeting of the Heads of Border Officers of the Competent Bodies of SCO member countries in New Delhi.

The meetings on Wednesday, the two-year anniversary of the clashes in the Galwan Valley where 20 Indian soldiers were killed in brutal clashes with Chinese troops, also reflected an attempt by New Delhi and Beijing to defuse differences between the two countries. – Between an estimated 100,000 soldiers on either side of the border. Neither side made any statement on the anniversary of the Galwan clash. China has officially said that four People’s Liberation Army (PLA) soldiers were killed during the conflict, although the casualties are believed to be high. Since then, military commanders and diplomats have negotiated the withdrawal of troops at several points on both sides of the LAC such as Pangong Lake, Gogra Point and Galwan, but failed to achieve success at patrol points at Depsang of PP15, south of Galwan Huh. and Chumar, in 15 rounds of talks. Officials said that the 16th round is expected soon.

Jim Polzin: Football from Wisconsin could win the 4th Big Ten West title in 7 seasons. This is why it would be the most impressive

Myth or Reality?: “If You Pull Out Gray Hair, You Get Seven More”

Tips for optimizing your computer’s performance

Will China’s invasion of Taiwan go all out? Here is Beijing’s answer

US expresses concern over Xinjiang report on genocide

Why did China threaten America?

US angers China by announcing $1.1 billion arms package for Taiwan

US concerned over China’s crimes against Uighurs

China simulated attacks on US Navy ships in the Taiwan Strait

US concerned about China’s crimes against Uighurs