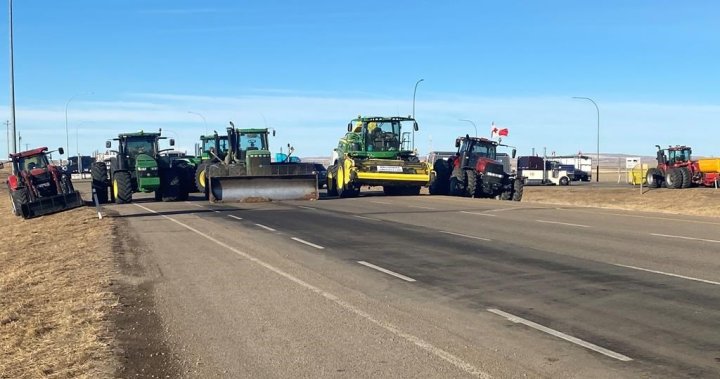 As the protest at Coutts, Alta., enters its 13th day, the Opposition NDP is calling on the United Conservative Party to take action after a Medicine Hat woman’s family members lost their mother while being stuck behind the convoy.

The northbound and southbound lanes at the border crossing remain closed and protesters refused to move from the highway encampment at Highway 501 and Highway 4 south of Lethbridge to a safer area, said an Alberta RCMP spokesperson on Thursday morning.

Things remain peaceful aside from some “shouting and chanting” and protesters are still allowed to bring supplies at the border on foot. Vehicle access is restricted to Coutts residents or people with approved business in the area.

However, the blockade has frustrated a lot of truckers and residents.

Megan Allan’s two aunts were vacationing in Arizona when their mother “took a turn for the worst” and was placed in palliative comfort care at a long-term care facility in Medicine Hat last Sunday.

They immediately booked the first available flights to Great Falls, Mont., to pick up their vehicles so they could drive home to see their mother.

The two landed at Great Falls at 9 pm on Monday and immediately started the drive back to Medicine Hat. According to Allan, they were unable to get through the Coutts border crossing due to the protest. The next closest border crossing would not be open until 8 am the next day.

“My aunts were unable to make it. They didn’t have the opportunity to be with their mom because of the protests and the blockades. They would have made it if they could have gone through,” said Megan Allan as she broke down at a virtual press conference on Thursday.

“I understand that the truckers’ message is about freedom, but their protest affected my family’s freedom and my aunts will never get the chance to say goodbye.”

According to Dach, the bill grants Minister of Transportation Rajan Sawhney the legal authority to suspend commercial operator licenses if operators fail to follow the highway and road regulations.

“I think we can all see very clearly that the rules of the road are not being followed,” Dach said. “We cannot allow this small group of people to continue to break the law and cause so much harm to Alberta families and businesses.

Trucks lining up again at Coutts border crossing, protesting plan to stay for the long haul

It is unclear, however, whether Dach’s request will apply to the majority of protesters who arrived in personal vehicles, farm trucks or farm equipment. An NDP spokesperson said many of the vehicles at the border protest would require a Class 1 or Class 3 licence, which many protesters are likely to hold for agricultural or seasonal work.

“A suspension of their operator license would certainly impact those drivers,” said the NDP spokesperson.

“This also has a significant impact on our supply chain, not just in Southern Alberta, but across the province and the country.”

Sawhney said the best way to support all industries is for protestors to move off of critical infrastructure like Highway 4, “so those who are stranded and others waiting for critical supplies to be delivered are no longer financially and emotionally impacted.”

“We encourage law enforcement to use every tool available to bring the protest to a peaceful conclusion.”

Sawhney’s statement went on to say revoking or suspending a commercial license must be preceded by convictions from tickets issued by law enforcement under the Traffic Safety Act: “Decisions on how to address the illegal blockade and enforce the law are at the sole discretion of police. “

“We are hopeful the situation is resolved expediently to allow traffic to start flowing across the border without delay.”

Please be advised the north and southbound lanes to the Coutts border crossing are now closed due to protester’s blockade.

The Blackhawks, the middle counsel, met with the arbitrator for the first time. AP News