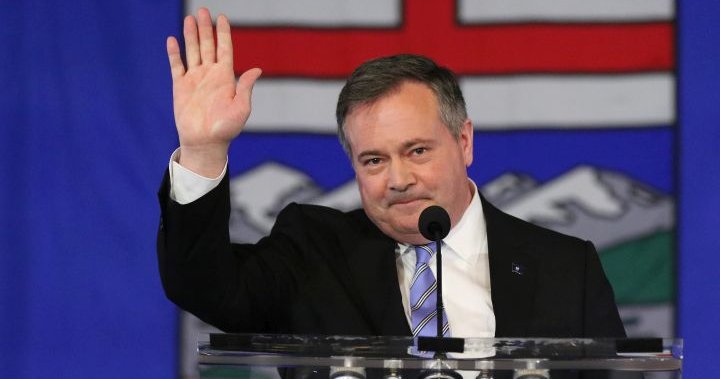 Premier Jason Kenney threw Alberta politics into a tailspin Wednesday when he narrowly won a United Conservative Party leadership review vote only to announce he was quitting the top job anyway.

To gasps of surprise from a few hundred supporters at an invite-only event in Calgary, Kenny said the 51.4 per cent support he received was not enough to stay on.

“The result is not what I expected for or frankly what I expected,” Kenney said at the Spruce Meadows equestrian center before a crowd that included several cabinet ministers.

“While 51 per cent of the vote passes the constitutional threshold of a majority, it clearly is not adequate support to continue on as leader.

“That is why tonight I’ve informed the president of the party of my intention to step down as leader of the United Conservative Party.

“We need to move forward united. We need to put the past behind us. And a large number of our members have asked for an opportunity to clear the air through a leadership election.”

I want to thank Jason Kenny for his public service.

There are obviously many things about which we don’t agree, but that doesn’t negate the time and sacrifice that goes into taking on the role of Premiere.#ableg #yyc #yeg #abpoli

His press secretary, Justin Brattinga, said Kenney is to remain as party leader until an interim leader is chosen. A caucus meeting is to be held Thursday.

Brattinga added that Kenny plans to keep his legislature seat.

Kenny has said anger from party and caucus members over decisions he made to limit personal liberties during the COVID-19 pandemic ignited the anger against him that led to open criticism of his leadership and ultimately the underwhelming vote of support in the review.

“It’s clear that the past two years were deeply divisive for our province, our party and our caucus, but it is my fervent hope that in the months to come we all move on past the division of COVID,” he said.

If Kenny had received less than 50 per cent plus one, he would have had to quit as per party rules.

Normally, leaders consider 75 to 80 per cent — or higher — the minimum credible mandate to continue leading their party.

Kenny had long suggested he would accept even a slim majority, saying the voting pool was skewed by last-minute members interested only in scuttling his big-tent conservative party.

The leadership review took on heightened importance over the past year as Kenney was buffeted by poor polling numbers, sluggish fundraising and open dissent from some in his party and caucus.

It was also punctuated by controversy. It had already been delayed by a year when it was set for an in-person ballot on April 9 in Red Deer, Alta.

When 15,000 members signed up — five times more than expected — the party said it couldn’t handle the logistics and moved to a mail-in ballot open to all 59,000 members.

Critics said the change was made to give Kenny the edge as it appeared he was going to lose the in-person vote.

Elections Alberta is also investigating of illegal bulk buying of memberships in the review. And the party remains under investigation by the RCMP over investigation of criminal identity fraud in the 2017 contest that saw Kenney elected leader.

Kenny had made it clear that the vote and open dissent had become a “soap opera” distracting the party facing a provincial election next May.

He also said that if he got the required support, he would expect dissenters in his caucus to rally behind him or face anonymous consequences.

Two backbenchers who openly criticized Kenny last year — Todd Loewen and Drew Barnes — were voted out of the caucus and sit as Independents.

I would like to thank @jkenney for his service to Albertans. I look forward to continuing to serve the people of Cypress Medicine Hat and Albertans to ensure we are the freest most prosperous place in North America. #ableg #medhat

Backbenchers Jason Stephan, Peter Guthrie and Brian Jean — who helped Kenny found the UCP — had been the most vocal. They openly urged the premier to resign for the good of the party.

Opponents in caucus have said the dissatisfaction was not just over COVID-19 policies, but also over his management style, which they deemed to be top-down, dismissive and undemocratic. They said Kenny had not done enough to gain a better deal for Alberta with the federal government on shared programs.

Former Progressive Conservative premier Ralph Klein left after getting 55 per cent of the vote in 2006. Ed Stelmach and Alison Redford received 77 per cent in their reviews, but stepped down from the top job when the party pushed back.

5:45
Why all Albertans should be paying attention to the UCP leadership review

Analysis: Whatever Nadal’s future, his legacy is secure

Warning message for Democrats in US primary voting