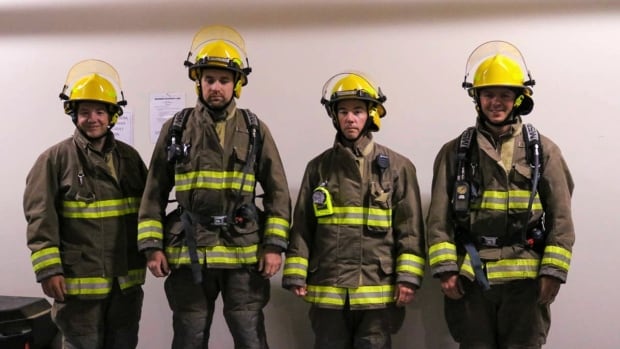 The community of Castor, Alta., is in mourning today after a firefighter was killed responding to an accident late Friday night.

Around 930 people live in the town, located east of Red Deer, Alta. The volunteer fire department serves the town of Castor, and parts of Painearth County.

Richard Elhard, mayor of the town, said he received a call on Friday at about 8:30 pm that a “horrific accident” had taken place.

Road conditions were extremely icy at the time and fire crews were traveling out to a motor vehicle accident. Due to the ice, one of the trucks lost control and rolled.

The town’s fire chief, Patrick Kelly, was injured in the accident, and firefighter Stephen Rayfield was killed.

Elhard said Rayfield worked for a wind farm just west of town. He leaves behind a wife and a young boy.

RCMP Cst. Patrick Lambert said the crew was responding to a single-vehicle, single-occupant rollover that also occurred due to slippery roads. The driver of that vehicle was taken to hospital with minor injuries.

He said it’s difficult to see first responders become the people being responded to themselves.

“Those atmospheres and environments are not something that we want to deal with,” he said.

“However, we recognize as men and women and Albertans within the first responder field, that at any time we may be called upon to provide support, medical assistance, or be the responder to one of our fellow partners.”

A big part of the community

The fire department in the community just recently moved into a new fire hall. Elhard said Rayfield was integral to the opening of the new hall.

Just recently, the firefighters in the community held a cash fundraiser and requested Elhard come down to make the draws. Rayfield had his phone out and was filming fire chief Kelly and the mayor.

“We were giving him the gears about what a poor cameraman he was, and the guys were all kibitzing around,” Elhard said. “That’s the last time I spoke with him.”

Rayfield himself posted on the Facebook page on Jan. 26 for the Castor fire department, sharing the news of the opening of the new fire hall.

“Big massive thank you to everyone that has helped make this happen,” he wrote. “It means a lot to us all.”

Elhard said in the coming days he’s sure the mourning fire crew and Rayfield’s family will be supported by the community. Because of COVID-19, he’s unsure exactly what form that community support will look like at this time.

“But this community, for sure, will stand behind them,” he said.

“In the fire industry, we’re a big family. When we have a tragedy with our own family, it’s a shock for all of us across Canada,” he said.

,[For] not just his immediate family, but also his department and the rest of the firefighters, it’s a brotherhood and a sisterhood, and it’s a shock to everybody.”

Kelly, the town’s fire chief, was transported to hospital in Red Deer. He has since been able to return home.

Alberta Justice Minister To ‘Back Down’ From Duty During Conduct Review After Traffic Ticket: Kenny

He estimated the cost of the search operation at $1.2 million for a young man who he believed had been struck by a current...

How climate change poses unique risks to pregnancy, according to the latest IPCC report