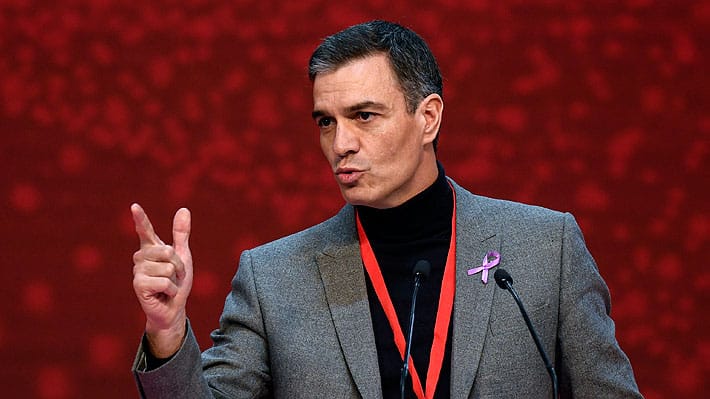 is alert madrid officials revealed that in recent days they have sent Six letter bombs to various organizations, was the most recent Discovered this Thursday at the Embassy of the United States of Americawhich has been added to yesterday’s explosion at the diplomatic headquarters ukraine, Another recipient of these artifacts was the President of the Spanish Government, pedro sanchez,

In the US embassy case, a package containing explosive material of “similar characteristics” to those discovered in the previous week was detected, according to the Interior Ministry. The parcel did not pass the security filter of the legationActivating the relevant security protocols.

Then on Wednesday the alarm was triggered A letter bomb exploded and an official of the Ukrainian embassy in Madrid suffered minor injuries, which led Kyiv to order the strengthening of security at all its diplomatic representations. This Thursday, officials specified that, On 24 November, he intercepted a similar package addressed to Pedro Sánchez.,

The “envelope with pyrotechnic materials addressed to the President of the Government” was “Detected and neutralized by the security services” from the Moncloa Palace, according to a statement from the Ministry of the Interior, which said it was identical in both appearance and “content” to the one received at the Ukrainian embassy in the Spanish capital.

« At the expense of the definite results of the analyzes being carried out, The envelope may contain a substance similar to that used in fireworks.“, the ministry specified.

After its detection, Moncloa Security “proceeded to a controlled deflation of the envelope,” he explained.

In addition to the one addressed to Sanchez, one that was found at the US embassy today and one that exploded at the Ukrainian diplomatic headquarters, two identical envelopes were intercepted on Wednesday afternoon and Thursday morning, respectively. Headquarters of the Instalaza arms company in Zaragoza (northeast), and at the Torrejón de Ardoz military basenear Madrid.

“The progress and results of the investigation that may produce an analysis of a different nature being carried out by the experts of the National Police, The characteristics of the envelopes and their contents are the same in both the four casesadded the ministry.

The Spanish justice, which the day before opened an investigation for a possible crime of terrorism after the incident in the Ukrainian embassy, ​​​​indicated this Thursday that combined all the facts in a single causeIncluding the fifth suspicious envelope sent to the headquarters of the Ministry of Defense.

Also on Wednesday afternoon another “suspicious” envelope was detected arriving at the headquarters of the arms company instalzaIn Zaragoza (northeast), according to the Ministry of the Interior, which states that the Explosives Disposal Police Units (TEDAX) carried out “a controlled detonation of the device”.

Instalaja makes a grenade launcher that was sent to Ukraine by the Spanish government of socialist Pedro Sánchez shortly after the Russian invasion of that country in February.,

and in the early hours of Thursday the security systems of ” Base area of ​​Torrejón de Ardoz (Madrid) detected a suspicious envelope which, after being analyzed by X-ray, determined (that) it could contain some sort of mechanism,” said a message from the Interior Ministry.

The base, near the Spanish capital, is used by official planes that transport members of the Spanish government and military planes that deliver arms and other types of aid to Ukraine.

Faced with this series of similar incidents, the Ministry of the Interior said it had ordered “excessive security measures” both in embassies and in public and government buildings, “especially with regard to the control of postal articles.”