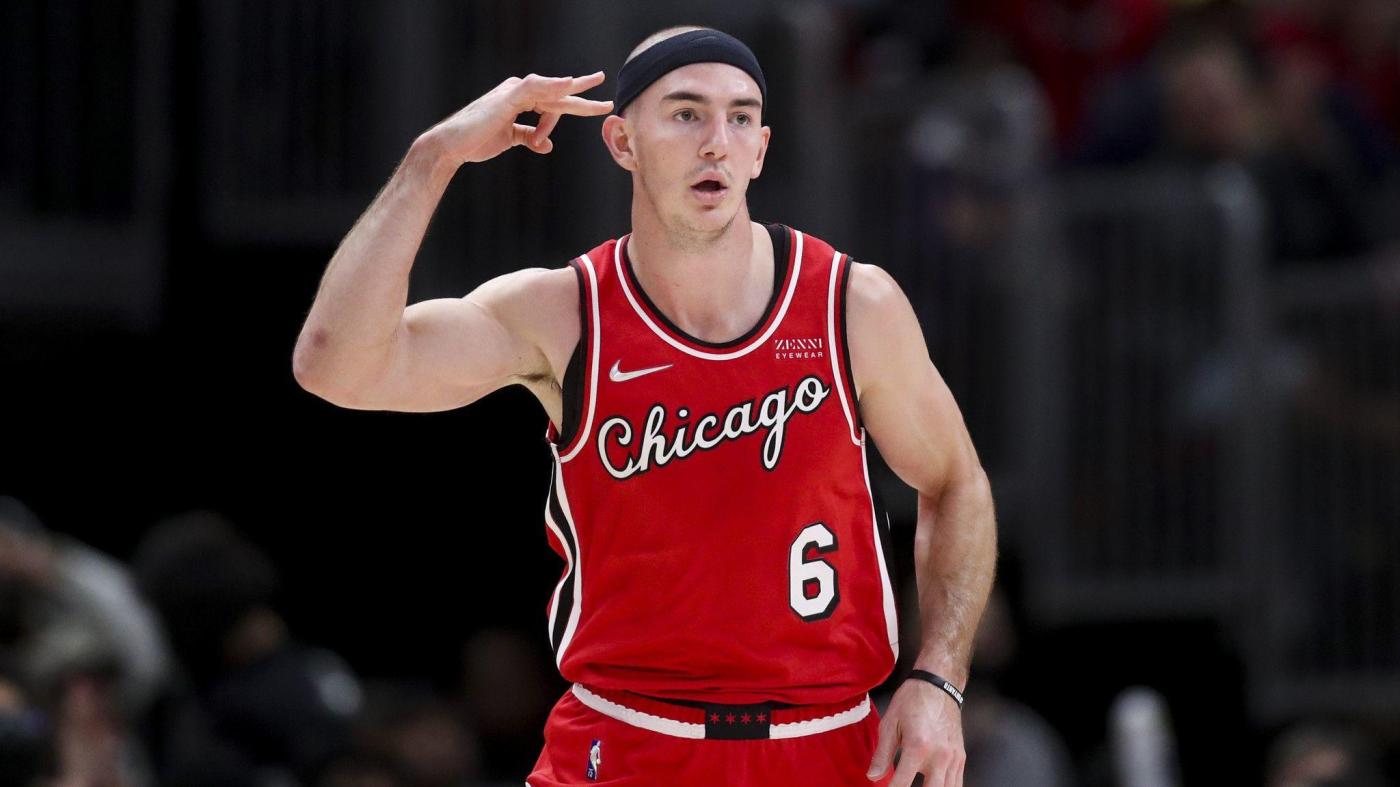 The Chicago Bulls dealt with good and bad news in Saturday’s 101-91 win over the Cleveland Cavaliers as injuries continue to make and break the team.

The good: Alex Caruso returned to the lineup after a two-month absence because of a right wrist fracture caused by a Grayson Allen foul in the Jan. 21 game against the Milwaukee Bucks.

The bad: Zach LaVine sat out for the fourth time in the last month as he continues to battle “discomfort” in his left knee, rekindling concerns about how much the starting guard can contribute in the final stretch of the season.

LaVine’s loss cast a pall over a day the Bulls were awaiting through months of defensive slippage, but Caruso’s welcome home party couldn’t be contained for long.

The entire game wore a feeing of celebration. Javonte Green wore a white headband to match Caruso while Patrick Williams donned Caruso’s jersey on the sideline. LaVine and Tristan Thompson crashed Caruso’s postgame broadcast interview, half-tackling the guard from behind and jovially tugging off his headband.

Caruso’s stat line might not leap off the page: 11 points, four assists, four steals and a block. But the guard brought an intangible intensity the Bulls desperately missed after a starting drop from a 10th to 21st defensive standing.

“I caught myself walking on the court for pregame warmup just smiling, excited to be out there,” Caruso said. “When the game started, I was standing up for random plays that probably didn’t need to be cheered for. I was just excited to be back playing basketball.”

Donovan warned that Caruso might need time to make an impact — between the wrist fracture, a foot sprain and a bout with COVID-19, he played only 28 of the first 66 games this season. But Caruso delivered on those hopes almost immediately, stealing the ball twice and punching away a block in his first eight minutes on the court.

Before the game, Caruso’s playing time was set to a loose window of 24 to 30 minutes. Donovan said the restriction served to ease the guard back into full-speed fitness rather than protect his wrist, which is fully healed.

Caruso nearly passed that limit, joining the Bulls closing unit and playing 29 minutes. When Donovan pulled him earlier in the fourth quarter for a brief respite, Caruso animatedly asked the coach to put him back in.

“He was tired at the end,” Donovan said. “That’s why I took him out. I knew we would need him coming down the stretch and they were making a little bit of a run. I don’t think he was too thrilled at me taking him out, but that’s OK.”

Donovan noted the Bulls become “more disruptive” with Caruso on the court, totaling 12 steals and 21 points off turnovers. The Bulls matched that sharpened defense with sloppiness on offense — turning the ball over 12 times — but the defensive pressure still made a difference.

The Cavaliers shot 41.9% from the field and went 5-for-24 from 3-point range, making only a single shot from behind the arc in the second half.

Although a back-to-back road stint from Miami to Chicago contributed to the Cavaliers’ frosty shooting night, the game still marked the first time the Bulls held an opponent under 100 points since Jan. 21 — when Caruso suffered the wrist injury.

Consistent production from Nikola Vučević and DeMar DeRozan — who combined for 45 points — and a 17-point scoring night from rookie Ayo Dosunmu cemented enough offense to hold the Cavaliers off by double digits.

Any excitement around Caruso’s return has to be tempered by the resurgence of LaVine’s knee discomfort after several weeks of relief.

Caruso is a key defensive player and an invaluable leader on the bench and court. But LaVine is the team’s heartbeat, and he hasn’t been the same since the start of the year because of lingering knee irritation.

The left knee has been a point of concern for LaVine since he tore an ACL with the Minnesota Timberwolves in 2017. He began to feel tightness in the knee in January, sitting out of games sporadically and then flying to California to receive cortisone and platelet- rich plasma injections before All-Star weekend.

Donovan repeatedly has the injury is causing “discomfort” rather than pain, but LaVine is wary to play whenever tightness reduces his range of mobility. He receives daily guidance from a team of doctors, which includes the specialist who performed his ACL surgery in 2017.

Donovan previously floated the possibility of resting LaVine when the Bulls are scheduled to play back-to-backs to manage his workload, but the guard powered through the first consecutive pair of games last week in losses to the Atlanta Hawks and Bucks.

Resting on back-to-back games isn’t far from an anomaly in the NBA, but LaVine’s absence Saturday raises a more pressing concern. LaVine didn’t practice or play Thursday or Friday, then didn’t participate in shootaround Saturday morning. But even with that rare amount of rest, he still didn’t feel steady enough to play against the Cavaliers.

Although Donovan said there’s no reason to sound alarms over the injury, the uncertainty of LaVine’s availability will color the rest of the season.

“The feeling was to see if we can get him back down to ground zero where he’s feeling a little bit better,” Donovan said. “It’s not one of these things where we’ve mapped out what we’re doing. … It’s got to be almost going day to day just to see how he’s feeling. I don’t know if it’s necessarily concerning or not with the fact that he’s had two days. It’s just that there’s some discomfort there.”