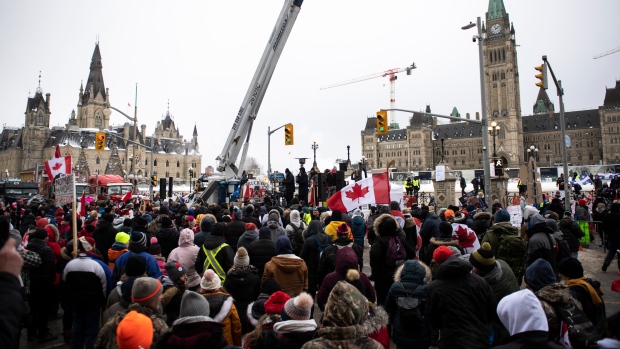 OTTAWA – Almost two-thirds of Canadians oppose the Ottawa protest against COVID-19 measures, with more than four in 10 saying they strongly consider the demonstration a selfish display, a new poll suggests.

But almost 30 per cent of Canadians surveyed by Leger disagreed with that characterization of the demonstration against COVID-19 measures that has seen hundreds of large trucks create gridlock and incessant noise in the national capital.

In addition, 44 per cent of those polled said they sympathized with the frustrations being voiced by the protesters.

The survey highlights the extent of divisions within Canada, said Andrew Enns, executive vice-president of Leger, suggesting the protesters might have tapped into broader concerns than just the grievances of a small minority.

The Leger survey of 1,546 adults was carried out between Feb. 4 to 6. No margin of error can be assigned because web-based polls are not considered random samples.

The survey found that 65 per cent thought the trucker convoy in Ottawa was a “small minority of Canadians who are thinking only about themselves and not the thousands of Canadians who are suffering through delayed surgeries and postponed treatments because of the growing pandemic.”

Fifty-seven per cent thought the convoy was not about vaccine mandates but “an opportunity for right-wing supremacist groups to rally and voice their frustrations about society.”

Just over half of Canadians polled said they found the convoy in Ottawa “scary” because it reminded them of the storming of the US Capitol Building in Washington last year. Only 23 per cent strongly agreed with this statement.

However, 44 per cent of those polled agreed with the statement: “I am vaccinated against COVID-19 but I do sympathize with the concerns and frustrations being voiced by people involved in the trucker protest in Ottawa.”

The same proportion agreed that the prime ministers and premiers “share the blame for the protest in Ottawa because of their condescending attitude toward Canadians who disagree with vaccine mandates and lockdowns.”

Enns said the poll had tapped into underlying frustration among a wider section of the public with the pandemic and its handling.

“The convoy has captured and crystallized some of these feelings,” Enns said. “It is a bit of a message for leadership that this might be a bigger problem.”

Ten per cent said Pierre Poilievre should take over from Erin O’Toole as leader of the Conservative party, followed by seven per cent favoring Ontario Premier Doug Ford.

NDP Leader Jagmeet Singh would seem to be the biggest beneficiary of a Tory party led by Poilievre, the survey suggests.

While support for the Tories showed no change with Poilievre at the helm, the NDP saw a bump in popularity to 24 per cent from 21 in the polls.

Support for Justin Trudeau’s Liberals would dip to 31 per cent from 33 if Poilievre became Tory leader, the survey suggests.

This report by The Canadian Press was first published Feb. 7, 2022.