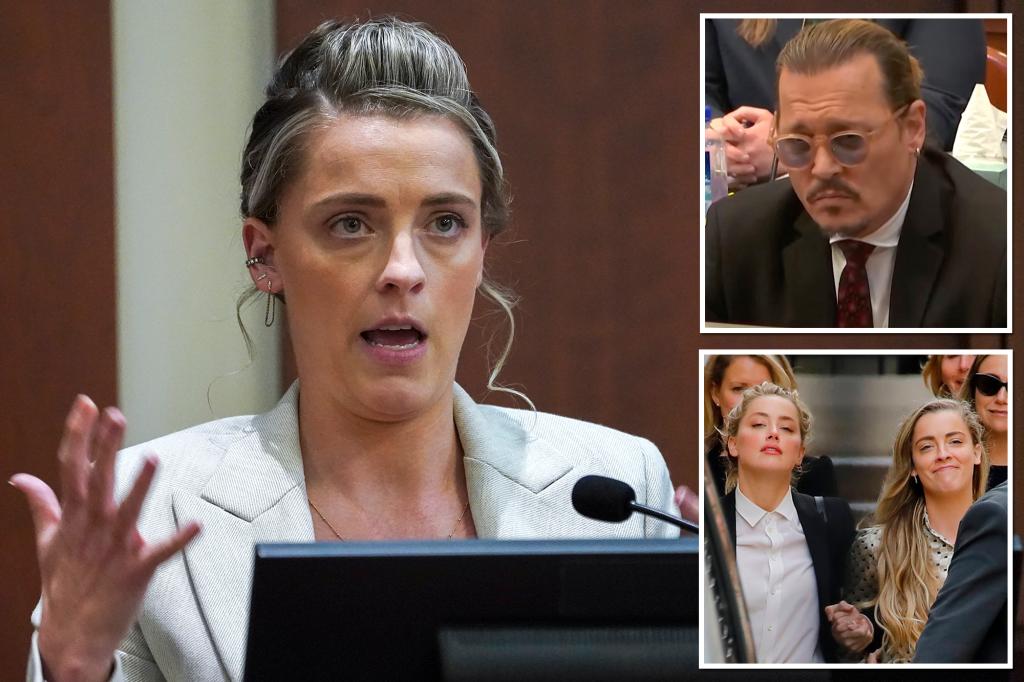 Amber Heard’s younger sister Whitney Henriquez testified Wednesday that Johnny Depp once hit her and called her a “whore” during a blowout fight.

Henriquez, 34, told the jury in Fairfax, Virginia, that Heard was forced to step in and tell Depp, “Don’t hit my f—ing sister.”

She also shed light on the “Pirates of the Caribbean” star’s alleged controlling behavior, testifying that he managed her sister’s phone, medication and wardrobe.

Recalling the alleged events of March 23, 2015, Henriquez said she awoke in the middle of the night in the pair’s Los Angeles pad to Heard in her room saying, “Can you believe he’s cheating on me?”

“Your f—ing brother is cheating on me,” she recalled Heard telling her, referring to Depp, who Henriquez used to call “brother.”

She attempted to comfort her sister, but the argument spilled out into the home’s mezzanine area, with Depp, 58, and Heard, 36, “screaming horrible things at each other,” Henriquez said.

Henriquez alleged Depp struck her in the back while spewing profanities.

Henriquez testified that Heard then “landed” a slap on Depp.

Heard has previously testified that she hit Depp once in the face, during the penthouse fight, because she feared for her sister’s safety.

Depp responded by grabbing Heard by the hair and striking her repeatedly across the face, Henriquez testified.

The sisters eventually sought refuge in a locked bedroom.

“We could hear Johnny screaming, ‘I f—ing hate you, you f—ing whores,’ ” Henriquez said. “And we could hear smashing.”

The next morning, Henriquez woke up to find Heard’s closet destroyed, with clothing racks thrown downstairs and art off of the walls.

In the beginning of their relationship, however, Henriquez said the couple “seemed really in love.”

Over time, Henriquez alleged, Depp became more controlling and violent — starting with him keeping an eye on what Heard wore or what roles she took on.

“It started with light jokes,” she said of Depp’s attention to her sister’s clothing. “Then it intensified. Ultimately they had the same stylist, and he was essentially controlling what she wore to events.”

Depp looked on from the courtroom as his former sister-in-law went on to tell the jury how he also controlled Heard’s medical care by assigning her a private nurse to administer medications.

Every time they fought, Henriquez alleged, “some device of Amber’s would get smashed.” She added that her sister, “lost a phone, a tablet, a laptop.”

Henriquez said the couple’s fights often started because of something Depp saw on Heard’s phone.

Ultimately, Henriquez said, her sister was not allowed to have a password on her phone. If she did use a code, it had to be something simple that “[Depp] memorized.”

Henriquez’s latest statements come after her more extensive testimony in Depp’s explosive 2020 libel trial in the UK, which he lost.

During her previous testimony, Henriquez claimed that she “begged” her sister not marry Depp. She also denied reports that Heard assaulted her in the past, saying the reports were trying “create a story and a narrative that wasn’t there.”

Henriquez was briefly cross-examined by Depp’s attorney Rebecca Lecaroz before leaving the stand. Her testimony was the latest in the trial that is now entering its fifth week.

Hold On Montana, Are Out Of Stater’s Really Always To Blame? Nope