09:39- Also at the request of López Obrador and “as a tribute”. Marco Antonio MunizNow “por amor” is heard in the morning.

09:36– At the request of López Obrador, “El Año Viejo” by Tony Camargo is now playing in the mornings.

09:30- “We have kept ourselves”: López Obrador once again “throws the oil” and claims, “before the end of the year”, that he will be the second most widely accepted political leader in the world after the Prime Minister of India Is. He thinks that one week he was in first place.

09:28- Pope Emeritus Benedict XVI is one of the best of the Catholic Church.

09:23- i want to Benedict XVI Go ahead, get well, outlandish President López Obrador.

09:21- López Obrador does not know whether Pope Francis can visit Mexico before the end of his six-year term: “He will always be welcome here.”

09:20- Pope Francis has acted with great respect, I would say that’s why the Mexican Church has been respectful towards us: López Obrador.

09:16- i have already invited pope francisco Lopez Obrador says to come to Mexico with Vatican head of state. “Regardless of religion, I have great respect and admiration for Pope Francis, I consider him a very humane man, who knows how to keep the Catholic Church in line with the realities of injustice,” he declared.

09:13- Regarding the balance of the year made by Monreal in which he mentioned that there is insecurity, López Obrador expressed that he does not answer anything: I do not want confrontation, I do not think of anything better (…) I am going to apply that you own your silence, whatever you say will be used against me.

09:11- We no longer want government jobs by companies, but by contracting directly to the government, because there is no outsourcing and it still is, President López Obrador believes. They allege that the number of employees is reduced in December so that they cannot be given benefits.

09:07- The president highlights the recovery of purchasing power and compares it to the other six-year terms extended in his government.

09:05– The President instructed the Secretary of Security to look into the complaints of ejidatarios in the State of Mexico.

08:57- The President mentioned that he intended to send a letter to Biden on January 2, ahead of the bilateral meeting. He announced that good things are about to come for our people.

08:54- He recounts the topics he will discuss with Joe Biden in January: economic integration across America, self-reliance, imports; a plan to combat inequalities in Latin America and the Caribbean; Monroe policy has already changed and all countries of America consider each other as allies and respect sovereignty. He owes his respect to Joe Biden.

08:52- Lopez Obrador says the issue of testing Genaro Garcia Luna He wouldn’t touch it with Joe Biden: “This is a matter that has to do with American justice.”

08:49- López Obrador assured that Muñoz Ledo in the Zocalo was made a joke: “People don’t forget, it’s a lesson not to bother people.”
One who is aspirational and plays dirty, or works profitably or wants to be smart does not help him, it is reverse, it has boomerang effect, we should be careful of excesses, we should learn to limit ourselves And one must learn to respect people, he says.

08:44- Despite the statements made about him, López Obrador says that he greatly respects Porfirio Muñoz Ledo, and Cuayhtemoc Cárdenas. Once again he talked about his impeachment process.

08:38- López Obrador tells an anecdote about the election of candidates Cuauhtemoc Cardenas why Porfirio Munoz Ledo, for the presidency and head of government. He says that in 2000 he did not even think that he would be a candidate for the head of the government.

08:33- “I don’t get into it,” he says of a billboard promoting Claudia Sheinbaum’s figure.

08:32– ensures that Sheinbaum, Marcelo Ebrard why Adam Augusto Lopez They are “first class people” and without mentioning Ricardo Monreal, he says that there are “others”.
Once again, López Obrador says the right has no candidate for 2024 or experience: “I hope there is no piece of claudio x gonzalez or scratch”.

08:30- Once again, López Obrador says that governing is not easy because politics is a noble profession and a millionaire, an artist or a comedian “whom the people like” can dedicate themselves to it. I am very happy because those who are willing to agitate are first class, he declared.

08:28- When Shaandaar’s figure was questioned claudia sheinbaum In some states, President López Obrador responded: “It is a matter of the movement, of the party, the ideal would be equal opportunities for all.”
He declared that I have no preference for any bottle cap, for me all presidential aspirants are first class.

08:26- He assures that 8,000 elements of the General Staff looked after previous presidents, and he has only 15 elements of auxiliaries. López Obrador says support elements are touring the country.

08:21- He says that the US Secret Service is monitoring Joe Biden’s arrival in Mexico. Once again, López Obrador argues that Joe Biden arrive at IIFA next January for their meeting, and accuse the media of “lending itself to this coarse and conservative protest”.

08:17- Once again, López Obrador shows a comparison of human slaughter in the Treasury Hall to Salinas de Gortari between the six-year periods, and states that “the press doesn’t like us.” What to say Felipe Calderon “He’s the champion” in human slaughter for the declared war on drug trafficking.

08:12- This year we have begun to reduce the crime rate, especially with regard to homicide, the president assures, defending his security strategy.

08:12- The most important thing after life is freedom; Health is very important, it is a right, he says.

08:10We’re going to have one of the best public health systems out there next year, the president insists. He says his government is already building up the health system after the pandemic.

08:08- We support our brotherhood with Cuba. Sending greetings to Guatemala, Belize, Ecuador, Argentina, López Obrador says, at the end of the year, I would like to speak with all the presidents. Peru and Brazil.
He told that his wife Beatriz Gutierrez Mullertravels to Brazil to represent them at the inauguration of Lula da Silva as President of Brazil.
I think Lula is a blessing to the Brazilian people, with Lula there will be equality and joy, he declared.

08:04- He alleges the policy of privatization in the last six years in the matter of health and education. The appointment of doctors from other countries is remarkable: we thank the Government of India cuba, I thanked Diaz Canel Because they have sent us 500 experts.

08:01- He said that we already have medicines for 2023 and 2024, now we have to continue with the distribution. IMSS-Bienestar’s progress in reforming the public health system with 90% of prescriptions filled in nine states stands out “and we’re making progress”.
I hope that by the middle of next year we will already have a quality health system, one of the best in the world, this is my commitment and I know how to fulfill my commitments, López Obrador again it is said.

07:58- All the medicines needed for 2023 and 2024 have been procured, we have already moved ahead with what was spoiled by corruption, the President mentions again. He alleges that the media has a hand in buying medicines.

07:55- Laura Velazquez states that C5 loudspeakers are maintained for seismic warnings, which are delivered in a timely manner. Seismic Recording and Instrumentation Center (cherry tree) to enhance the system in the country.

07:52- Once again, López Obrador refers to the poll to select his movement’s candidate for 2024. He refers to the “majority movement”.

07:49– In my whole public life I have verified that women are very responsible, hardworking, honest, they are very good for public service, expressed Laura Velazquez and Rosa Isela Rodríguez as examples. There is no justification for paying a woman less than a man, in cabinet we try to pay appropriately, he says, when he was head of government “and still.”

07:47Progress has also been made in women’s participation and economic income, the president highlighted the social programs that are intended to be beneficiaries.

07:42- The fact is that we, since the beginning of the pandemic COVID-19We pointed out that we had a first class team and have maintained that because the Secretary of Health, Jorge AlcoserThe President says, he is a very outstanding scientist. Hugo Lopez-Gatell He says that it has had an exemplary performance in dealing with Kovid.

07:38– The National Coordinator of Civil Defense says that having an alert across the country is out of technical consideration.

07:32- Laura Velazquez, national coordinator of civil protection, explains that the national seismological service is nationwide and does not send alerts like the seismic warning system, which was designed for Mexico City.

07:30- 692 people have been released, Rosa Isela Rodríguez is mentioned before López Obrador.

07:27- Rosa Isela Rodríguez announced that the regularization of chocolate cars would continue for three more months in 2023.

07:24- The Secretary of Security says that they have followed the instruction of López Obrador to regularize one lakh 47 thousand 142 chocolate cars and 2 thousand 600 million pesos have been collected to pave the roads.

07:22- Rosa Isela Rodríguez, the security secretary, reappears the morning after an accident; López Obrador mentions that he fell and calls to beware of accidents at home.

07:18 – The President’s conference begins Andres Manuel Lopez Obrador. When they didn’t play it yesterday, he asks if they play the song now”old year“, From Tony Camargo,
What to say Marco Antonio Muniz He is an excellent musician and he also asks for a song from “El lujo de Mexico”: “Well, we already have a repertoire”. 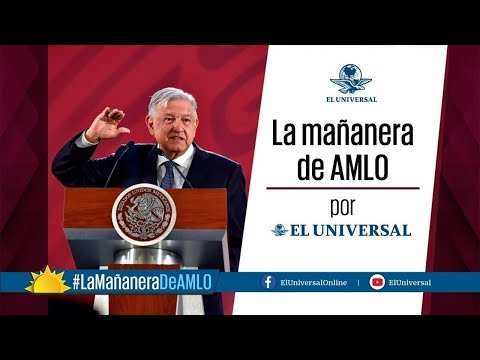