An emerging company investigates leading drugs for obesity and diabetes 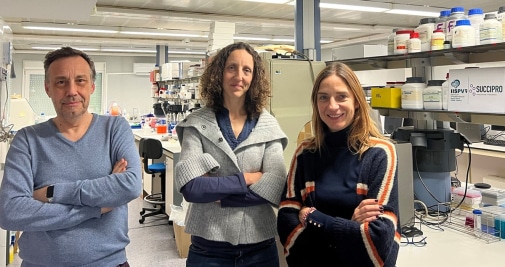 Up-and-coming Catalan company SUCCIPRO is researching pioneering drugs for obesity, type 2 diabetes and Crohn’s, among other inflammatory and metabolic diseases.

was born from the company’s team Pere Virgili Health Research Institute (IISPV) and Rovira i Virgili University (URV)from Tarragona, and there is one 100,000 Euros of support from ACCIO’s Startup Capital ProgramAgency for the Competitiveness of the Company of the Department of Business and Labor of the Generalitat.

According to SUCCIPRO, they are focusing their studies on discovering innovative therapies that reduce succinate, a substance that is naturally produced by the body’s cells and intestinal bacteria (the so-called microbiota) and released when inflammation or It is changed if there are metabolic diseases. ,

“People with diseases such as Crohn’s, obesity, and diabetes suffer from inflammation that is related to increased levels of surrogate production,” Dr. Isabel HuberCompany CEO.

The aim would be to develop a range of probiotics that would help regulate the production of this substance and, therefore, contribute to improving people’s health. metabolic and inflammatory disorders Such as obesity, diabetes, Crohn’s or non-alcoholic fatty liver.

In fact, the company is currently developing other enzyme-based drug products also capable of reducing succinate, which they calculate could be tested in humans in 2025.

“We think that the health of patients with these diseases may be improved if they are administered products capable of reducing succinate levels, as our data show that a reduction in this molecule reduces inflammation and improves metabolism.” improves,” Dr. Huber explained.

“In the case of diabetes, for example, we’ve seen that our treatment can improve glycemic levels and insulin sensitivity (two indicators that are altered in patients with diabetes), while in Crohn’s, the inflammation associated with a reduction in adiposity can be reduced. Will help in controlling the disease,” he said.

According to the World Health Organization (WHO), the incidence of obesity (a condition considered to be the main risk factor for the development of diabetes) in the world’s population has tripled over the past 50 years.

For its part, Crohn’s disease affects 100 to 300 people out of every 100,000 inhabitants, but its incidence in the population is increasing, especially in young people, and yet there is no treatment with relevant efficacy on the market.