An Invisible Black Hole Hanging Into a Neighboring Galaxy 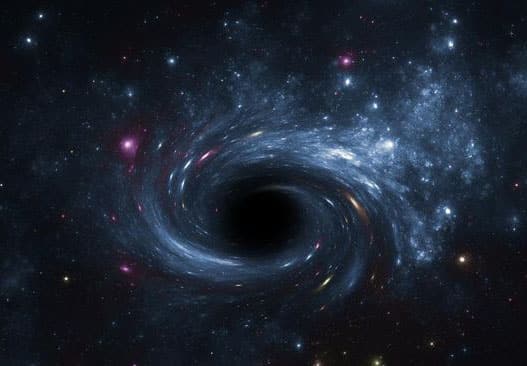 An invisible black hole, the result of the collapse of a star, is hanging silently in a neighboring galaxy. Potentially a threat to Earth?

The challenge of finding this type of black hole is enormous because these celestial bodies do not actively eat matter such as gas, dust, stellar matter or even planets such as Earth.

Without such feeding activity, black holes would not emit the X-rays that scientists use to detect ordinary black holes. The new discovery is said to help researchers better understand how stars end in life.

“We have identified a needle in a haystack,” Tomar Schner, an astrophysicist at the University of Amsterdam in the Netherlands and lead author of the new study, said in a statement.

The black hole that Schner and his colleagues discovered has a mass of about nine times the mass of the Sun and is located in the Tarantula Nebula, a star-forming region in our neighboring galaxy, the Large Magellanic Cloud.

The black hole orbits a massive blue star that has a mass equal to 25 Suns. These two space objects form a binary system which scientists have named VFTS 243.

Read Also:  An Expert Explains How Solar Storms Can So Easily Destroy Satellites

“The star that formed the black hole in VFTS 243 appears to have completely collapsed, with no prior signs of an explosion,” Schner said.

“Evidence for this ‘instant collapse’ scenario has emerged recently, but our study provides arguably one of the most direct clues. This has major implications for the origin of black hole mergers in the universe.”

In addition, the discovery of VFTS 243 requires scientists to examine six years of data collected by the Very Large Telescope (VLT), located in the Atacama Desert region of northern Chile.

In the data, scientists examined 1,000 massive stars in the Tarantula Nebula region of the Large Magellanic Cloud to determine whether any of these stars might have a dormant black hole companion.

For each star, the team analyzed its spectrum and measured how much light the star emits at certain wavelengths. And in the VFTS 243 data, the researchers saw anomalies in the star’s orbit, such as those caused by massive black holes.