Anti-discrimination: a dress against the hatred of differences presented in Argentina | The “Amsterdam Rainbow Dress”, worn by Flor de la Vie, bears the flags of countries that attack LGBTIQ+ people 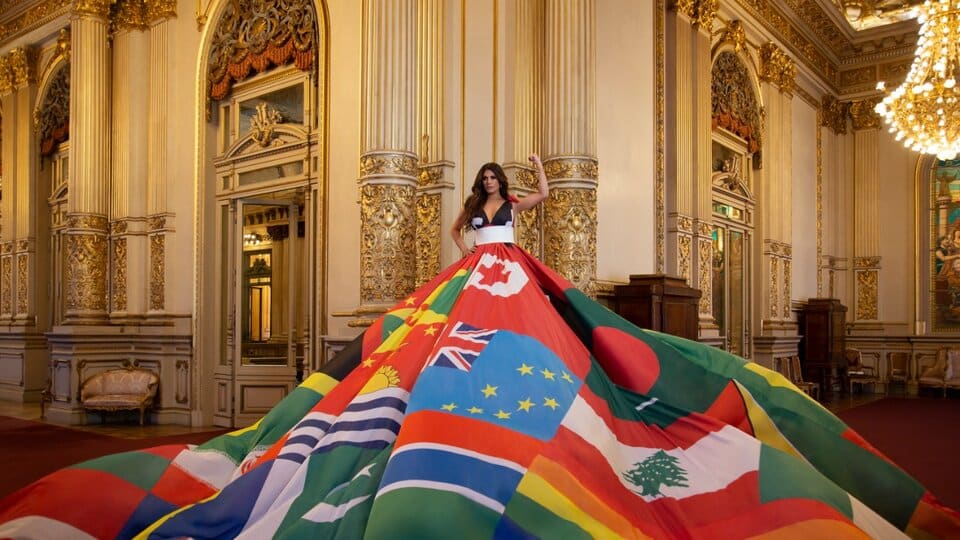 A dress made from the flags of 71 countries that still persecute, imprison and punish LGBTIQ+ people has arrived in Buenos Aires. It is the “Amsterdam Rainbow Dress”, a piece of artistry, created by a designer from the Netherlands, who seeks to create awareness and debate about this serious violation of human rights. Actress and host Flor de la Vie was chosen to wear it in emblematic places in the city, including Caminito, Teatro Colón and the move of UBA’s law faculty, as part of the Action Against Discrimination and Anti-Discrimination Law for the LGBTIQ+ world. In, and within the framework of the Coalition for Equal Rights (ERC) global conference, which takes place this Thursday and Friday in Buenos Aires with representatives from 42 governments and over 140 civil society organizations civil society, the United Kingdom and Argentina co-chaired by, to address the urgent challenges facing LGBTIQ+ people in various fields, especially their criminalization.

This is the first time the costume has been displayed in Latin America. Very excited to be a part of this action, Flor de la Vie insists that dress as a garment has a very symbolic meaning for trans women: “Going out in a dress for the first time is a political statement,” She said, very shaken.

The “Amsterdam Rainbow Dress” was presented this Thursday at an event hosted by the Embassy of the Netherlands at the Four Seasons Hotel. “Behind the stats are people who are victims, unarmed families: I was kicked out of my home at 17 for who I am, I was a kid. Today the life expectancy of trans people is 35 years and it’s our identity. Because of the social and media creation of the that embraces diverse identities,” said Flor de la Vie, who defines herself as a transvestite woman.

“It’s a living work. If any country whose flag is on the dress is no longer penalized for being LGBTIQ+, that flag is replaced by a rainbow. Since the project’s inception, in 2016, only six countries has changed its law. The dress is changing but very slowly”, said Arnaut van Krimpen, the producer of the work, who is also in Buenos Aires.

In every city where “Amsterdam Rainbow Dress” visits, exhibitions and photo sessions are held in symbolic locations, as part of its aim to draw attention to countries where it is still illegal to be LGBTIQ+, on the situation Promote public debate and combat discrimination against groups of sexual diversity. He has already visited other cities including Toronto, Ottawa, Berlin, San Francisco, Madrid, Athens, Seoul, Brussels, Johannesburg, Maputo, Warsaw.

The dress came from the Dutch government’s human rights ambassador, Bahia Tehzeeb-Lee, who will attend the Global Conference of the Coalition for Equal Rights (ERC). The same official said she wore an “Amsterdam Rainbow Dress” during a Pride march in the Dutch capital last year. The ambassador highlighted Argentina’s leadership in the field of rights for LGBTIQ+ people nationally and internationally. “It is also one of the most progressive countries in the region in terms of inclusive legislation,” he said. “We congratulate Argentina for playing this important leading role and inspiring other countries to follow its example,” he said, adding that it has been a good idea to ratify same-sex marriage legislation in Latin America and highlight gender identity legislation. It was the first to have, and for trans people, job quotas in state agencies, approved in 2021. The Netherlands was the first country in the world to legalize same-sex marriage in 2001. It is also the main government funder of LGBTIQ+ projects around the world with $84 million. For 2019-2020, the official highlighted. The Netherlands, together with Uruguay, established the ERC in 2016.

Today’s Panchang: What happened on 12th September | Events in Argentina and the world

They draft a bill to classify “law” as a crime. A legal shield against judicial persecution

The day Queen Elizabeth II and James Bond surprised with a sketch. Under what circumstances did the emperor decide to appear before the character

Three centuries after gender equality, the worrying conclusion of a UN report How is the situation in Argentina

Uncommon: The Story of the “Superman Kid” That Shocked the World at the Complete Announcement of Gabriel Boric in Chile He got on his bike and circled around the president

Today’s Panchang: What happened on 4th September | Events in Argentina and the world

Today’s Panchang: What happened on 2nd September | Events in Argentina and the world

Why are we the only Spaniards who use blinds?

Another “appearance” of Diego Maradona?: Viral video that shook fans it happened in scotland

LIVE: NASA’s Artemis I mission liftoff from Cape Canaveral canceled | With the return of astronauts to the Moon and Mars in sight

LIVE: NASA’s Artemis I mission liftoff from Cape Canaveral canceled | With the return of astronauts to the Moon and Mars in sight

Today’s Panchang: What happened on 25th August | Events in Argentina and the world

Sanna Marin apologizes for a new photo of a party at the official residence. “Nothing extraordinary happened,” said the Finnish prime minister.

Exercise lowers risk of infection and reduces severity of COVID-19