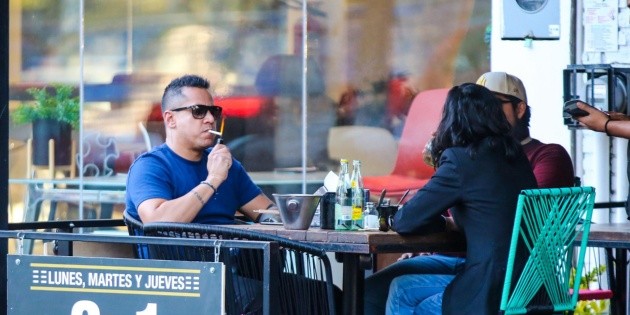 From this Sunday, changes to the general law for tobacco control take effect, which mainly include New restrictions on smoking and consumption of entertainment centers or food, as well as changes to advertising permits.

And for business owners, they can have designated areas for smoking, but the change is that they will not allow the offering of food or drink. There are restrictions up to 829 thousand pesos.

Fabiola Macías Espinoza, a professor at the University of Guadalajara, explains that the aim of the reform is to reduce cigarette advertising to prevent people from starting to smoke from an early age. And it regulates the places where smoking is done: “Although there are smoking and non-smoking areas, the particles remain in the air and cause harm, especially to vulnerable people.”

After a survey conducted on more than 15 establishments located in the Chapultepec area, none of the people in charge were aware of the new criteria. “I didn’t know… and most of the customers are smokers. We will try to find a solution, because smoking can be done on the terrace,” said Marcos Saucedo, a bar manager.

Mario Avalos, president of the National Chamber of Restaurant and Experienced Food Industry in Jalisco, insisted that he had held meetings to explain the issue.

Most are in favor of new smoking bans

After a poll conducted by this publishing house with 2,486 netizens, the majority were in favor of reforms that increase restrictions for smokers with the intention of not affecting people’s health.

At the end of this edition, 57% agreed with reforms to the general law for tobacco control.

“I have never smoked, so it pleases me that they are more restrictive in all places. Those of us who do not smoke should be respected”, insisted Juan Tejeda while eating at a Providencia restaurant.

Mario Ávalos, President of the National Chamber of the Restaurant and Seasoned Food Industry ,Kanirak) in from Jaliscopointed out that they opened up the possibility of getting all that information for union members who want to resort to security, but also “for those who want to go the way of not having smoking areas in their businesses. Both Things we are working out and guessing. It will be everyone’s decision.” Although the measures do not apply specifically to their union, the situation worries them as they were one of the sectors most affected economically by the pandemic.

“It’s a little excessive regulation. And some businessmen make some significant investment in their restaurants, enabling and customizing their places for smoking areas. At the national level, Cannirock demonstrated on its website that it actively participated in the discussion of common legislation for tobacco control, “creating a coexistence between smoke-free places and people who want to exercise their freedom and smoke.” want”.

However, “the chamber, like other sectors and industries, believes that the regulation is riddled with inconsistencies and has a negative impact on restaurants.” the organization has accepted The published regulation exceeds its powers, “as it purports to regulate what is set out to be the general law for tobacco control. There is no intention to restrict the provision of services or the consumption of food or drink in particular areas for smokers. Health is not the justification.

He adds that the modifications lack scientific evidence, so do not necessarily prevent tobacco use, as people can continue to do so at home. “Investments made to comply with the existing regulations were not taken into account.”

“Difficult, But We Must Adapt”

Jocelyn Ramos, manager of La Nacha y Grillo restaurant located in Chapultepec, commented that she was unaware of the rules and predicted that This can greatly affect the sector. “Since many people come to eat, after the meal they smoke cigarettes or come to drink and smoke. I understand this part that there are people who don’t smoke, but for that they are given a choice of smoking and non-smoking areas.

He said it would be difficult to make changes. “It seems somewhat difficult to me, because 50% of our customers smoke, but we must adapt.”

Miguel, who is in charge of some of the wings, explained that his establishment is visited by families to eat, or people who watch sports events or live nearby, so it could be that many people do not like to give up their cigarettes. will do.

“The anti-smoking initiative gives me the impression that they’re seasonal, they want to do it very actively and then they stop. And then they come back again. They’ve wanted to do it for a long time; however, They haven’t been harsh. No one has told us anything at the moment, we are starting the year.”

They add up to over 25 years without a smoking area

Ana Garcia, manager of the restaurant La Estación de Lulio in Libertad, said smoking has not been allowed in the restaurant for more than 25 years. “We have that rule because most of our customers are older people or people with health problems.”

He stressed that he has realized that, for young people, mixing the smell of tobacco with food is harmful, “for health, for hygiene, for everything. Besides, it is too closed, we do not have access”.

He stressed that the decision has not affected or upset his customers, and that When someone wants to smoke, what they do is leave the establishment for a moment and then come back.

“Actually, customers are fine and we haven’t seen any dissatisfaction. The biggest reason is for health, tobacco harms lungs and people already pay more attention to that, on taking care of their health. They don’t have any problem No, they go to smoke on the footpath.

At another place called Coffee Legacy, located on Avenida Chapultepec, the person in charge of receiving customers remarked that smoking was not allowed either.

“There was never a smoking area at that place, it has been like this for 10 years. They ask us out, but we invite them to come out. There are many people who leave. It’s the owner’s decision and because tobacco smoke is uncomfortable to eat and smell…and also for health.”

With these measures they want to take care of the vulnerable

Fabiola Macias Espinoza, Professor in the Department of Applied Psychology and Coordinator of the Stress Management and Smoking Cessation Clinic.

Fabiola Macías Espinoza, an expert at the University of Guadalajara, analyzed that the new provisions aim to reduce the issue of cigarette advertising to prevent children and youth from smoking from an early age. In addition to regulating places where someone smokes Although there are divisions into smoking and non-smoking areas, he stresses that particulate matter in the air harms populations, especially vulnerable ones.

“Society is very concerned about the issue of caring for children and young people, that this culture that gives smoking a certain status is not exposed. The idea is that it is not publicized so that young people start a life in cigars.” Don’t

He explained that it seeks to take care of the health of all people because even in open areas and areas designated for smoking, emissions remain in the environment. “There is no health benefit; On the contrary, it has a significant impact on the development of respiratory problems, chronic diseases, affects the development of pregnancy.

An important aspect of the decree, he said, is that it refers to so-called vapers. “Many high school boys are doing this practice of vaping, which does a lot of harm, this decree does not specifically mention it, but indicates that it is related to everything related to smoking and nicotine, and opens up that possibility”

Fabiola Macías Espinoza stresses that smokers often feel criticized for their activity, but that the Stress Management and Smoking Cessation Clinic works to find the motivations they have for smoking and to stop smoking. Are able to initiate a process to reduce or eliminate.

“Smokers may feel attacked or that something negative is going to happen to them, but everything is designed to look after their own health. The idea is that they can learn more about the effects of cigarettes. Can come closer, and come closer to assess.”

He recalled that many people smoke for anxiety, and in therapy he helps them explore this and look for other options. “We know they use cigarettes for digestion, or to feel calm, or to reduce anxiety, but we can help them have other tools so that cigarettes are not the answer. And if they Want to continue smoking but don’t want their children or their family to smoke, we can guide them.