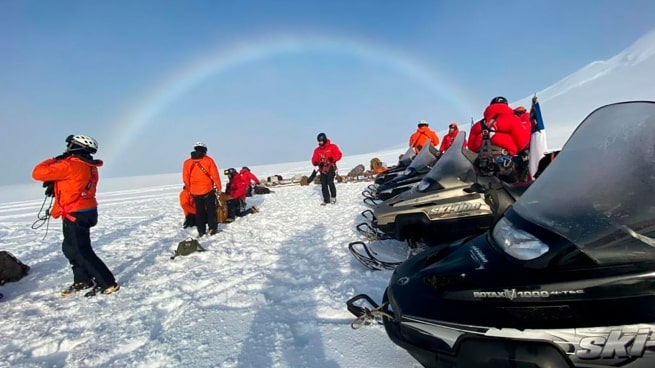 Argentine and Chilean troops shared exploration and rescue exercises in the Antarctic Peninsula as part of the cooperation agenda, which the two countries maintain on the White continent.

The aim of the exercise is to standardize procedures relating to search and rescue operation techniques, rescue practices, conducted by both patrol and reconnaissance of the O’Higgins – Esperanza Route.

When Argentine patrols arrived at the work area, they began with a tour of Base O’Higgins facilities (Old Base, Museum, Laboratory, Infirmary, among others), an exhibition relating to evacuation planning and possible activities. during future scheduled tasks.

On 17, 18 and 19 August, both patrols carried out training and standardization activities on rescue procedures around Mount Jacquinot, about 8 km from the Chilean base.

The work included techniques for climbing glaciers, tying ropes, first aid, and rescuing both people and vehicles that fell into the crevices.

Chile’s chief of patrol, Daniel Ordines Molina, said: “This professional example allows Chile and Argentina to exchange experience relating to rescue procedures and techniques in Antarctica, thus participating in a real incident in a joint To be able to take guarantees a better understanding.

The head of the Argentine patrol, Maximiliano Diaz, confirmed: “It is of vital importance not only to have clear knowledge among the members of a SAR (Search and Rescue) patrol, but also to homogenize rescue techniques and procedures, more on this.” Considering these latitudes we are the only immediate response in this area”.

In addition, given the existence of diving-qualified personnel from both patrols, the exchange of techniques and procedural knowledge can be put into practice as a result of the experience of the combined capabilities associated with and contributing to potential SAR operations in the region. brought into.

On the morning of 20 August, the practical execution of the Paracach exercise began under the proposal of a hypothetical situation, for which the commander of Base O’Higgins, Francisco López Cornejo, gave the patrol leaders a search and rescue mission, thus activating Punta Arenas ( Protocol with the Center for Antarctic Affairs of the Chilean Army) and the Chilean Base Frei.

During the exercise, activities such as displacement on the glacier, escorting of personnel and material, navigation with satellite means (inreach), communication, organized rescue techniques, first aid, stretcher (transfer of the injured), marking of the ENVAZ runway and crossing from the footbridge were carried out. Injured

As part of the exercise, they arrived at O’Higgins Base with a simulated wounded man who had a fracture in his lower limb and polytrauma; One of the special features of this base is that it has telemedicine service from the Military Hospital of Santiago, which responded to urgent care given the status of the exercise.