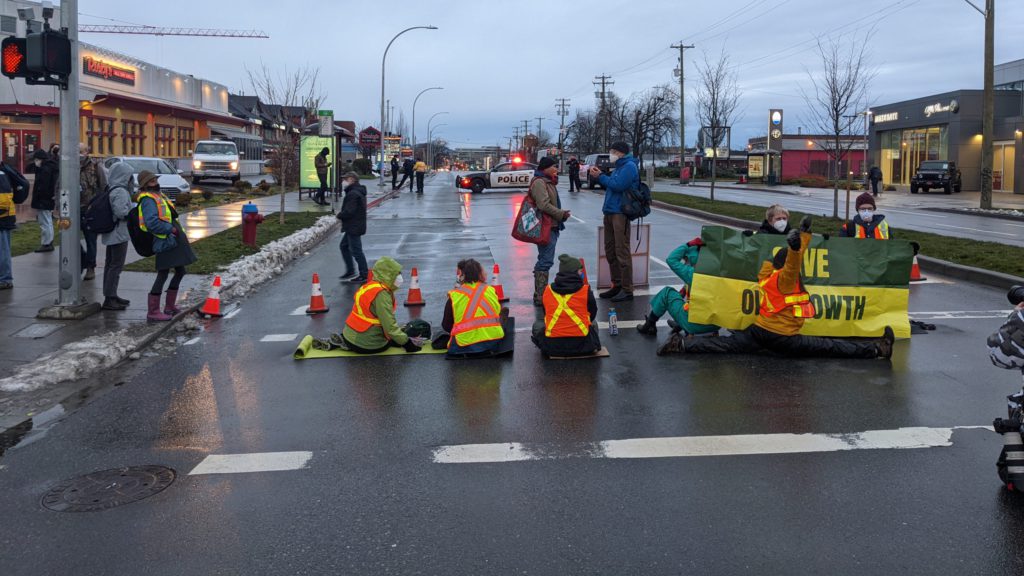 Police arrested 12 protesters Monday morning who helped block major roads in Victoria, Nanaimo and Vancouver in what they say will be ongoing protests against old-growth logging.

Protests in Victoria began around 8:30 a.m. Monday when protesters in high-visibility vests sat down in the middle of the road with traffic cones attached.

“The provincial government has failed to end all old-growth logging by our deadline of January 9,” read a statement from the group.

The campaign behind the protest, ‘Save Old Development’, is an offshoot of the Extinction Rebellion, a civil resistance movement.

“Old-growth forests are the lungs of our planet, and the BC NDP and their corporate friends are lung cancer. There are no jobs on a dead planet,” said Brent Eichler, president of Unifor Local 950 and campaign organizer.

Buses were forced to head towards Blanchard Street, while other southbound traffic diverted to Douglas and Finlayson.

Victoria Police said the demonstration was cleared on Douglas Street and Burnside Road East at around 11.40 a.m.

Seven people who blocked the highway have been arrested for mischief.

The authorities have arrested seven people who were jamming the highway for the disturbance. #yyj

A similar protest was held later on Monday morning to block traffic in Nanaimo.

According to the Nanaimo RCMP, the targeted area at the Nanaimo protest was the intersection of Milton Street and Highway 1 and the protest lasted only 15 minutes.

Police said the protest resulted in the arrest of two adults on charges of mischief.

“Shortly after, the group dispersed without any problems,” Nanaimo RCMP told Czech News.

Save Old Growth said Monday the blockade would be held every week.

A blockade was also put in place at the intersection of Willingdown Avenue and Grandview Highway in Vancouver during the morning rush, resulting in three arrests.

“Initially the Highway 1 off ramp will be blocked every week, and the frequency and scale of action will increase until all old-growth logging is stopped,” Save Old Growth wrote on the website.

“The government has the option of fulfilling its election promises, which are supported by more than 80 per cent, or sending non-violent people to jail. Save Old Growth is determined to grow every week that runs without government backlash. ,