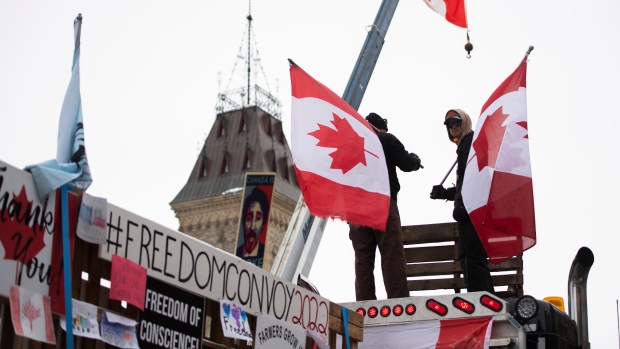 OTTAWA – Christ Church Cathedral closed in-person services just before Christmas amid a surge in COVID-19 cases, so congregations didn’t have to choose between going to church or seeing their families.

The church’s rector, Beth Bretzlaff, said the church was set to open on Sunday for the first time since mid-December as provincial restrictions were eased. Instead, lines of trucks plying the downtown core, and protesters occupying the streets, scrapped plans to reopen because, Bretzlaff said, it was not safe to bring parishioners into the area.

The so-called Freedom Convoy swept into the nation’s capital last weekend, and while some people went home during the week, police estimated that thousands were part of the weekend’s crowds, sparking a renewed increase in participation.

Similar scenes played out in other parts of the country on Sunday, albeit on a smaller scale than the day before when thousands of people marched from coast to coast in cities to protest against pandemic restrictions.

Halifax Police Const. John McLeod said hundreds of trucks and cars made their way through the downtown core on Sunday and caused considerable backlog, but officials were working to clear it. He said the situation was peaceful as no incident was reported.

Ontario Provincial Police closed the section of Highway 402 that crosses the border between Sarnia and Port Huron, Mich., as a safety precaution because of pedestrians on the highway near a convoy of trucks and tractors.

Ontario’s solicitor-general praised police’s treatment of thousands of protesters in Toronto, but said in a statement that Ottawa police “continue to express concerns about their ability to manage the ongoing occupation in their city.” “

Ontario Premier Doug Ford also weighed in, saying that the province backed Ottawa during the nine days of protests that critics have branded a business.

“While we cannot direct the police, we have provided the City of Ottawa with everything they have asked for and will continue to provide whatever support they ask for,” Ford said in a tweet.

About 100 criminal investigations were underway, including cross-border investigations by Ottawa police about an “email-based threat to public officials.”

Police also said on Sunday that protesters and anyone trying to bring items such as gasoline or supplies to the city’s 500 vehicles could be arrested.

Horns sounded in most parts of the city on Sunday, mixed with semi rumbles and slogans of freedom. Protesters lined up in tents on the streets of the city where hot food and drinks were being served.

Organizers had said they had planned to keep Horning quiet for Sunday prayers, but that faded early in the morning.

As the trucks passed through narrow intersections, the doors of many churches in the city were locked. Like Anglican cathedrals, nearby St Patrick’s Basilica made the decision to close on Friday risking civil unrest.

Online services have met any spiritual need for a city whose elected officials have expressed dismay amid warnings from the police chief that the situation will not end soon.

Sometimes what is needed is good governance, good policing and a little faith in people being responsible, Bretzlaff said.

“Let’s give it to the people who need to deal with this deal, and support them and look out for each other,” said Bretzlaff, whose title is highly respected, but often goes by “Dean Beth”.

The doors of the church remained closed all week, and the staff inside politely refused to let the protesters inside to use the washroom. Bretzlaff said the church also got calls from the United States asking someone to ask the pastor to go out and pray with the truck drivers.

The camp in Ottawa has been a hot topic among some Republicans in the United States, with more than a few members of Congress making a point of former US President Donald Trump expressing solidarity with the protesters, and in some cases, pointing to the disdain there. done for Prime Minister Justin Trudeau.

Sen. Ted Cruz on Sunday condemned a fundraising decision by platform GoFundMe to cut donations to convoy organizers, which the company said it did because of police reports of violence and other illegal activity.

Appearing on Fox News Sunday morning, the Canadian-born Cruz said he had written to US regulators to see if GoFundMe was involved in deceptive trade practices before praising Ottawa and elsewhere.

“They are patriots and they are marching for your freedom and my freedom,” he said.

Despite GoFundMe’s decision to cancel the main fundraiser for Convoy, dozens of others are on the website and similar fundraising platforms aimed at helping an individual or group as a whole.

This report by The Canadian Press was first published on February 6, 2022.