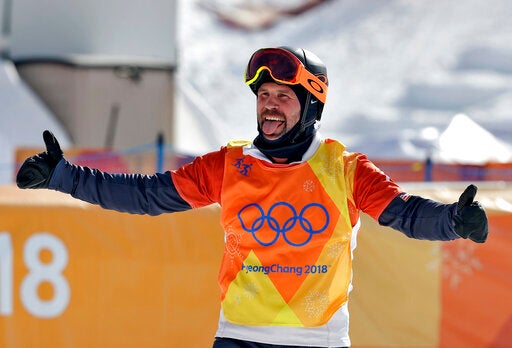 ZHANGJIAKOU, China ( Associated Press) — American snowboarder Nick Baumgartner remembers the exact time he started feeling old. It was noon on Dec. 17, 2017 — his 36th birthday. He was racing in Austria and got tangled up in a jump.

“I took a big crash that definitely brought a lot of pain to my back,” he said. “I crushed three vertebrae, and it does take a lot more to get back when you get older.”

Baumgartner is 40 now. On Thursday, he’ll kick off action at his fourth Olympics. He is adding himself to an ever-growing list of older athletes still mixing it up in a young person’s sport. His sport, snowboardcross, is as rough as anything on snow. Baumgartner, a staple of the US team since 2005, has had two World Cup podiums over the last three months.

He is very much in the mix for medals in the mountains above Beijing, either in the men’s contest or in the new mixed-snowboardcross event, where he could team with another veteran, 36-year-old Lindsey Jacobellis, who won a gold medal in the women’s event Wednesday.

“For me, it’s just, you’ve got to keep going,” Baumgartner said. “If you stop, it’s going to be the end of it. And so I just keep pushing, and the offseasons take more commitment.”

FILE – Glenn de Blois, of the Netherlands, from left, Nick Baumgartner of the United States, and Jakob Dusek of Austria compete during a semifinal of men’s snowboard cross at the FIS Snowboard Cross World Cup, a test event for the 2022 Winter Olympics, at the Genting Resort Secret Garden in Zhangjiakou in northern China’s Hebei Province, Nov. 28, 2021. On Thursday, Feb. 10, 2022, Baumgartner, 40, will kick off action at his fourth Olympics. ( Associated Press Photo/Mark Schiefelbein, File)

Baumgartner hails from Iron River in the Upper Peninsula of Michigan. His son, Landon, is in high school. There are three riders in the men’s heat who are barely older than that.

“Pretty cool when your son goes to high school and brags about you,” Baumgartner said. “I don’t think many parents get to experience that.”

Among Baumgartner’s 18 big-contest podiums is a Winter X Games gold he won in 2011. He also took a dip into off-road racing and enjoyed some success in the early 2010s.

But the snow has always been his top passion, and as he looks around the sports landscape, he can find plenty of motivation from top-level stars his age and older. Tom Brady won his last Super Bowl at 43. Phil Mickelson won the PGA Championship at 50. Last weekend, surfing legend Kelly Slater won a major contest only days before his 50th birthday.

Baumgartner concedes he’s not as fast out of the starting gate as he once was. But a lot of the battle in snowboardcross is figuring out the best lines on the course and staying upright.

“His decision-making keeps improving,” US coach Peter Foley said. “And maybe he’s not as fast in the starts anymore, but he adapts in other places and improves better than he ever has in other ways.”