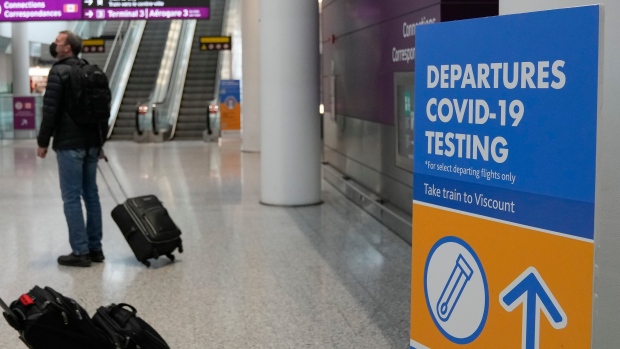 There are growing calls for the federal government to drop the mandatory arrival testing requirement for travellers, a rule experts say is doing little to impact the spread of COVID-19 while diverting sorely needed testing resources from provinces.

Ottawa is doling out thousands of PCR tests a day to fully-vaccinated travelers—including Canadians—upon arrival as part of its COVID-19 screening efforts.

But with the Omicron variant already driving unprecedented spread of COVID-19 domestically, Jason Kindrachuk, infectious disease expert at the University of Manitoba, says attempts to curb travel-related cases of the virus are akin to “trying to stop mosquitoes from circulating in the summer.”

“We already know we have a massive number of mosquitoes—you’re not going to be able to do that,” Kindrachuk told CTV’s Your Morning Wednesday. “You can test for other species that may have a stronger bite or may be able to circulate more, but that doesn’t mean that you have to look at all the mosquitoes that are coming in.”

This, at a time in the pandemic where many provinces have been forced to restrict molecular PCR testing, has sparked questions about the government’s use of testing resources, even prompting Air Canada, WestJet and Toronto’s Pearson International Airport to pen an open letter to the federal government calling for changes to the testing protocols.

“From a resource standpoint, we have to appreciate where we are right now and we’re already seeing limitations within the country with trying to be able to assess where Omicron is in our own communities,” Kindrachuk said, noting that Canada is in a very different place than it was in late November 2021, when Omicron was still isolated to certain regions.

“Now the question is, are you really stopping any potential additional transmission by being able to identify those cases [at the border], And I think the actual answer is likely not.”

On Friday, Canada’s Chief Public Health Officer Dr. Theresa Tam admitted that the mandatory testing requirement is a “drain” on the system.

And while she stopped short of calling for an end to the testing requirements, she suggested that Canada should stop “sequencing” every COVID-19 sample from travelers given the global spread of Omicron.

“The whole world has Omicron,” Tam told reporters. “We could do sampling for the tests, instead of testing every single vaccinated individual coming from other countries. But, we will evaluate that over time.”

In a statement to CTVNews.ca, PHAC defended the requirements calling them “critical at this time of reduced capacity in health and other sectors.”

“This approach makes optimal use of the maximum federal testing capacity in that it identifies as many cases of COVID-19 as possible. Individuals testing positive are required to isolate, preventing onward transmission of the infection,” read the statement.

“The Government is mindful of the need to monitor the impact of its testing program, including sequencing levels, to ensure that the program works in synergy with the diagnostic programs of the provinces and territories.”