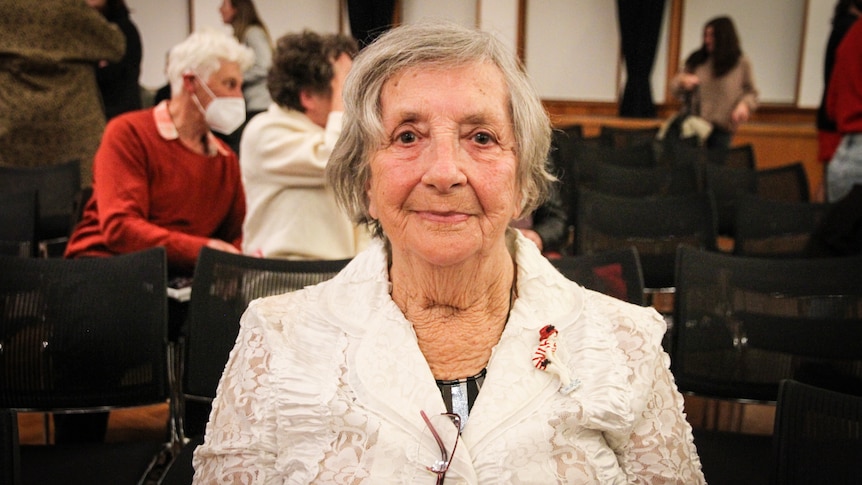 Over the past decade, Aunty Barbara Nicholson has made the journey to Junee Correctional Center more than 300 times.

The Wadi Wadi elder works closely with the prison’s Indigenous inmates as they learn how to connect their thoughts and feelings to words.

if i could go back to my twelve year old Self & tell my Self three things it would be, ‘focus more in school, choose different friends & choose a little wiser & Stay away from all drug’s [sic], to me Silence is a strong thing, i was always [sic] a Silent person & would never speak to anyone about anything & it soon became a dangerous thing to my mind that was untill [sic] i learn how to deal with the things i was being silent about without Speaking to people. i don’t have many things to speak about as I haven’t had the best & happiest life as of yet but once im out of custody i will be able to create a happy life now i am clean & only have those that truly do love me a part of my life…

The men write poetry mostly, and free-flowing, train-of-thought poetry written from the perspective of an angry, incarcerated Indigenous man makes for tough reading.

“We think about change a lot, but what is change?” Aunty Barbara asks.

“You don’t really get significant change from one momentous event, but I think you can change from an accumulation of a lot of events.

“And I’ve got an accumulation here, it’s 10 years, so let’s hope that can change things.”

Aunty Barbara has worked with hundreds of men, and says she remembers each one of them.

A decade after Aunty Barbara first started working with the inmates, the 10th edition of their journal of poetry, Dreaming Inside, has been published.

Read Also:  After decades of relaxation, Wiggles will host one of Australia's top music gangs

Launched by acclaimed author Melissa Lucashenko in Wollongong, the stories touch on love, life and loss as disenfranchised men express themselves through poetry, highlighting their own pain and misdemeanours.

At the launch, both Aunty Barbara and Lucashenko reflected on the importance of working with people inside jail.

A lot of people ask Aunty Barbara if she is frightened going into jail. She’s not.

She says while there’s a forbidding atmosphere, she feels safe.

“If anyone tried anything funny with me, there’d be 300 Aboriginal inmates in the jail who would sort it out one way or the other,” Aunty Barbara says.

So, what is it like working in a jail?

“I get more out of those trips than those boys get from me, I can tell you,” she says.

As an Indigenous woman who is concerned about the inmates’ access to culture, Aunty Barbara thinks culture is strong in Junee Correctional Centre.

,[Aboriginal culture] … it’s often stronger in there than what I sometimes see on the outside,” she says.

“It’s what sustains them in there.

Lucashenko, who hails from the unceded land of the Bundjalung nation, and has been couch surfing since the recent floods in her hometown Mullumbimby, was glad of the opportunity to launch Inside Dreaming Volume 10.

In preparation for the event, the award-winning wordsmith, author, poet and academic checked the definition of prison, and discovered its Latin word means to apprehendere.

“It literally means to take or to take hold of, and I thought, ‘That’d be right’,” Lucashenko says.

“There’s a lot of things that have been taken over the last couple of hundred years: land, lives, culture, children, prime years of people’s youth.”

Lucashenko is a founding member and active participant of Brisbane-based grassroots organization Sisters Inside.

Established in 1992, Sisters Inside — much like Dreaming Inside — is celebrating 20 years of assisting criminalized women, girls, children and families.

“It’s very rare for a grassroots organization to work in this space, especially prisons,” Lucashenko says.

“We all know that there is trauma, poverty, racism, white supremacy that leads to people to have outbursts and become violent.

“It’s not that the violence isn’t real, it’s that there is a better way.

“If we are going to apprehend the brothers in Junee, and the other people behind bars, the refugees included, homeless people who are using prison as somewhere to get a feed and a bed, mentally ill people who end up in jail because we don ‘t have a decent system of caring for each other, if we are going to apprehend those people, then let’s do it in the true meaning of the word, let’s take them all in and look after each other.”