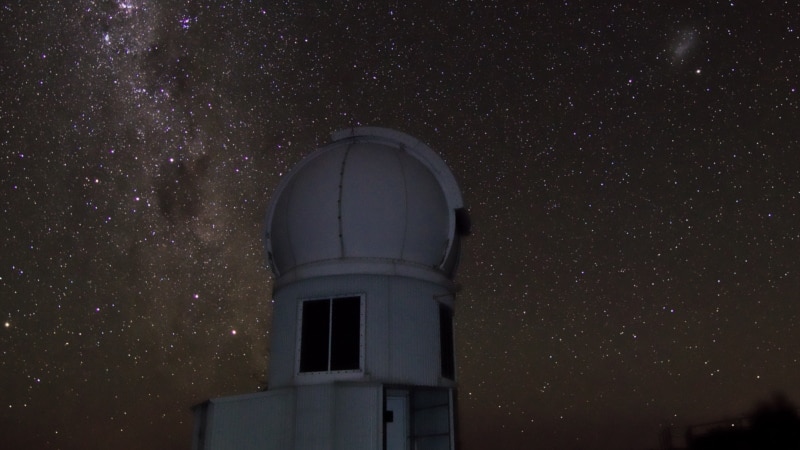 An international team led by astronomers in Australia has discovered a massive, fast-moving black hole that is brighter than previously discovered. Scientists say the black hole consumes the equivalent of one Earth per second and shines 7,000 times brighter than all the light in our own galaxy.

Researchers were looking for unusual stars when they came across a supermassive black hole. It consumes the equivalent of one Earth per second and has a mass equal to that of three billion Suns.

The Australian National University-led team believes it was obscured by the Milky Way’s light.

The discovery was made using the SkyMapper telescope at Siding Spring Observatory near Cunabarbran in New South Wales.

For a more detailed look, the team went to the South African Astronomical Observatory’s 1.9-meter telescope in Cape Town.

Christopher Onken of the Australian National University is the study’s lead researcher.

He says astronomers have been searching for these types of objects without success for more than 50 years.

“What we found is the brightest growing black hole in the last nine billion years of the history of the universe,” Onken said. “People have been looking for objects of this type for almost 60 years, and this one probably escaped notice because it was a little too close to the plane of the Milky Way, where there are so many stars that often all those objects follow. It is tougher than what you can get. And, therefore, it was just outside the range that was surveyed in the past.”

Black holes are parts of space where matter has collapsed on its own.

Their light comes from a ring of gas, dust and stars that surrounds the black hole, known as the accretion disk.

Astronomers hope this rare discovery will provide tantalizing clues about the formation of galaxies. The ancient black hole is so “amazingly bright” that it should be visible to well-equipped amateur stargazers.