Bajaj’s most popular Pulsar has now come in a new color look, it is a bit difficult to take your eyes off it 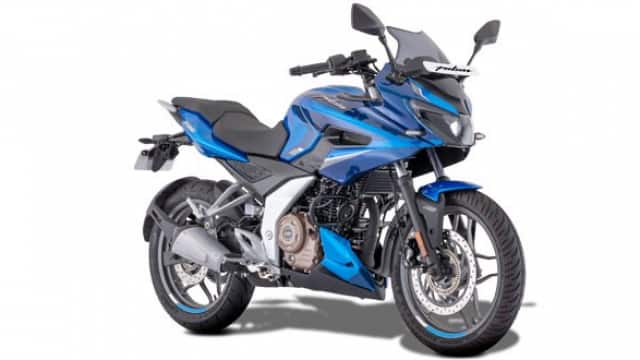 Bajaj Pulsar 250: Bajaj Auto has secretly launched its most popular bike Pulsar 250 range in new Caribbean colors. The new color will be available on both Pulsar N250 (Bajaj Pulsar N250) and Pulsar F250 (Bajaj Pulsar F250) motorcycles. This bike looks extremely attractive in this color. Blue and black combinations can be seen in the bike. The blue-painted body is also visible on the panel. It is placed on the headlamp cowl, front fender, fuel tank, engine cowl, fairing and rear panel. The Bajaj Pulsar range now offers blue strips for alloy wheels. The Pulsar N250 Caribbean Blue has an ex-showroom price of Rs 1,43,680 and the Pulsar F250 Caribbean Blue is priced at Rs 1,44,979.

No changes have been made in the mechanical specifications or features of the bike with the new color theme. That means it will have the same engine and features as its current model. Some of the key highlights of the Bajaj Pulsar 250 include the semi-digital instrument cluster, full-LED lighting, slipper clutch and more. Let us know what is special about bikes.

Read Also:  The demand for this luxurious SUV from Maruti increased suddenly, sales increased by 337%

249cc single-cylinder engine
The Pulsar 250 has a 249cc single-cylinder oil-cooled engine that generates 24.1 hp of power and 21.5 Nm of torque. The engine is mated to a 5-speed transmission. This bike gives mileage up to 45 kmpl. Whereas, the mileage of Pulsar F250 is around 40 kmpl. This is a very popular bike of the company. The company Pulsar 250 has crossed the 10,000 unit sales milestone. The company launched the Pulsar 250 6 months ago. That is, these bikes reached this stage within just 180 days. Bajaj said that it is the fastest in any 250cc bike, which achieved the milestone of this cell after BS6.

Specifications of both bikes

Pulsar N250: This bike has a 248.7cc 4-stroke oil-cooled FI engine, which generates 24.5PS of power and 21.5Nm of peak torque. It is packed with muscular fuel tank, a digital instrument cluster with Bluetooth connectivity and black-out alloy wheels. Single-channel ABS (Anti-Lock Braking System) is given as standard in motorcycles.

Pulsar F250: It has a new 250cc single-cylinder engine with oil cooler. Also VVA (Variable Valve Actuation) technology has been used in the engine to increase the performance in high range. The motorcycle also has a large fuel tank, two-piece seat, wide mirrors and slim LED turn indicators.

Now even if wearing a helmet, the challan of 2000 will be cut. Motorcycle and scooter drivers should be careful