Barbed wire has been installed along 2.5 kilometers of the border with Texas. 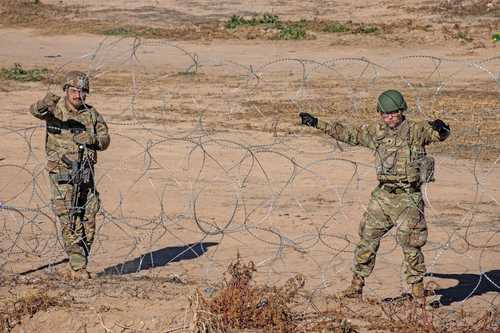 Ciudad Juarez, Chih., on the US side, about two and a half kilometers of the Rio Grande’s coast, was cordoned off by elements of the National Guard with barbed wire, as ordered by Texas Governor Greg Abbott, who called for a joint The state is trying to block the entry of immigrants seeking political asylum into the United States.

The wire fence, which has been installed by around 400 uniformed personnel since December 20, is joined by a three-metre-high metal wall built during the administration of then President Donald Trump.

The siege began on the banks of the Rio Grande, bordering the border cities of El Paso and Ciudad Juárez, the main route through which undocumented immigrants cross, and currently ends in front of Federal Electricity Commission facilities.

American troops, armed and armored vehicles were placed at strategic points to prevent the entry of foreigners.

The Texas government reported that the troops were flown from the 136th Airlift Wing in Fort Worth on December 21, from where four C-130J cargo planes airlifted troops and equipment to El Paso “as part of the governor’s enhanced border security effort”. Was flown

Meanwhile, the Joe Biden government warned that express deportations continue on the basis of Title 42, which is still in force.

The Department of Homeland Security explained in a statement that “Venezuelans attempting to enter the United States are also deported to Mexico and will be excluded from the Venezuelan immigration enforcement process announced in October.” It states: “Regardless of nationality, any person who attempts to enter without authorization is subject to removal under Title 42.”

The agency confirmed that all those who cannot be expelled would be subjected to expedited trials and deportations; They may also be subject to a five-year entry ban under Title 8.

“As temperatures remain dangerously low at the border, no one should put their lives in the hands of smugglers or risk their organs trying to cross,” he concluded.