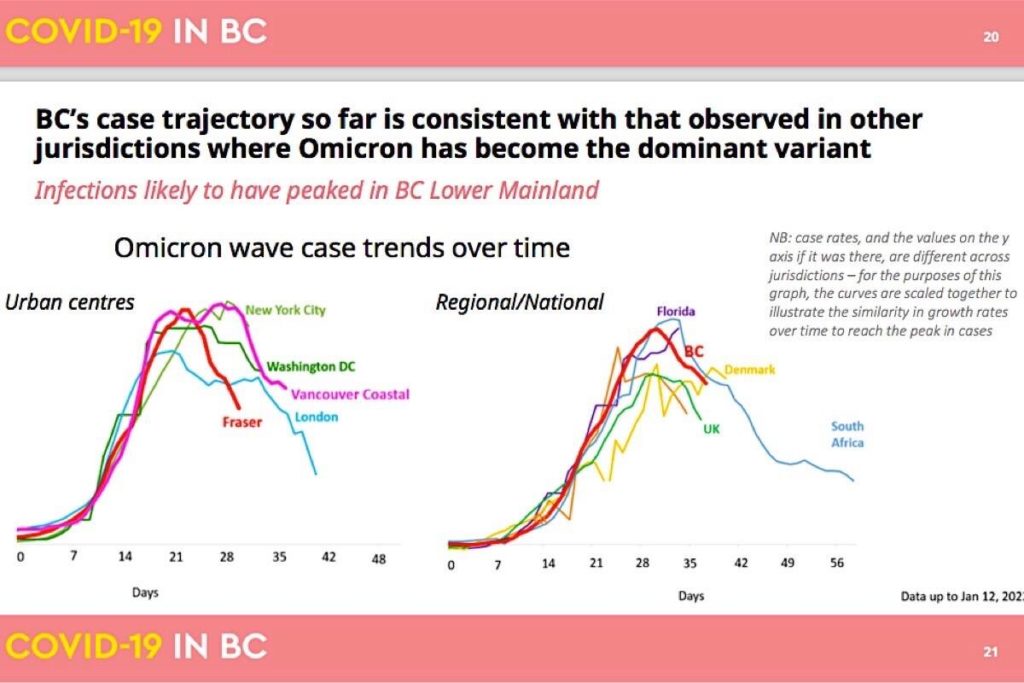 Provincial health officer Dr. Bonnie Henry said Friday that the likelihood of a fifth wave of COVID-19 infections in B.C. is nearing its peak, and hospital admissions are being closely watched with the hope that they will begin early next week. Will happen.

Data presented Friday shows B.C. following a similar pattern to other urban areas around the world, including London and New York City, where the latest version has seen rapid travel and people turn out to be infected.

“We probably reached our peak last weekend,” Henry said on January 14. “Now we believe we are on the bottom.”

Testing virus concentrations in urban wastewater provides a second indication, not relying on individual test results that have not been able to be maintained. Wastewater also shows a peak and decline in community infection during January. Omicron has been spread mostly in the Fraser, Vancouver Coastal Health Areas and South Vancouver Island, where it was first reported in BC after a rugby tournament in Ontario, which was attended by the Victoria team.

The latest data from the BC Center for Disease Control shows hospitalization rates are higher for people of all age groups, especially those aged 70 and older. While most severe disease in BC is still related to the delta variant, omicron is still a risk that increases with age.

“If you’re over 70 and you haven’t had your booster dose yet, you need it and you need it now,” Henry said.

Henry also addressed the common belief that an increase in infections among vaccinated people is a sign that vaccines are not effective against the Omicron variant. The analysis shows that even with double-vaccination of about 90 percent of BC adults, the small proportion of unvaccinated people is still causing most of the disease.

Gyms, bars and nightclubs remain closed as places at high risk for virus transmission, and capacity limits are set for indoor events. Henry said the situation is being monitored as the fifth wave continues to decline.

The central government wanted to close the farmers by making the stadium a prison, but we did not let this happen – Arvind Kejriwal

The Colorado Mountains were renamed Mount Mesta’hehe, replacing a ghoul