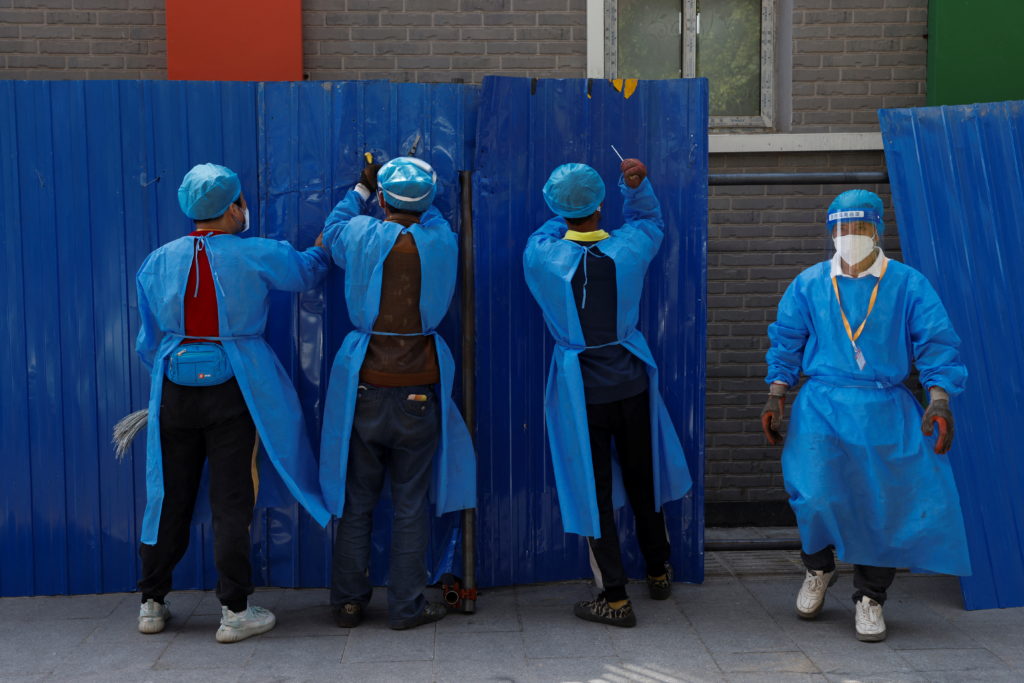 BEIJING ( Associated Press) – China’s capital on Wednesday closed 60 subway stations, more than 10 percent of its vast system, as an additional measure against the spread of the coronavirus.

Forty stations were closed in the morning, and 20 more were added in the afternoon. The Beijing metro authority said in a brief message that most downtown stations were being closed as part of epidemic control measures. No date was given for the resumption of the service.

Beijing is on high alert for the spread of COVID-19, with restaurants and bars limited to takeout, gyms closed and classes suspended indefinitely. Major tourist destinations in the city, including the Forbidden City and Beijing Zoo, have closed their indoor exhibition halls and are operating only at partial capacity.

Some communities where the cases were discovered have been isolated. People living in “controlled” areas have been asked to stay within city limits, with 12 areas considered high-risk and another 35 considered medium-risk.

City residents undergo three virus tests throughout the week as officials try to trace and isolate cases without enforcing the widespread lockdowns seen in Shanghai and elsewhere. It is necessary to obtain a negative test result within the past 48 hours to enter most public places.

Beijing on Wednesday reported just 51 new cases, of which five are asymptomatic.

The subway closure should have relatively little impact on city life, with China celebrating the Labor Day holiday this week and many commuters in the capital of 21 million already working from home.

In a downtown neighborhood classified as high-risk on Wednesday, streets were practically deserted except for a few delivery drivers on scooters and the occasional pedestrian or car.

All businesses were closed except supermarkets and fruit and vegetable shops. Outsiders usually stay away from high-risk areas to avoid the possibility of their presence being recorded on the tracing app installed on almost all mobile phones, creating potential problems for future access to public areas .

watch: Frustration and anger among Shanghai residents as China doubles down on zero-COVID policy

With a light touch in Beijing, China is sticking to its strict “zero-COVID” approach, which restricts travel, tests entire cities and sets up huge facilities to try to isolate every infected person. Is. Lockdowns begin in buildings and neighborhoods but build up across cities if the virus spreads widely.

It has caused the most disruption in Shanghai, where authorities are gradually easing restrictions that have kept most of the city’s 26 million people in their apartments, housing complexes or immediate neighborhoods for a month and in some cases longer. has been limited.

Shanghai reported another 4,982 cases on Wednesday, 260 of whom were asymptomatic with an additional 16 deaths. It continues a steady decline in China’s largest city, which reported a daily peak of 27,605 new cases on April 13.

The surprisingly low death toll amid an outbreak of more than 400,000 cases in China’s main stock market and largest port city has raised questions about how such deaths occur.

The harsh and widely ridiculed sanctions have led to a shortage of food and medical aid, along with a wide – though potentially temporary – effect on the national economy. Desperate, outraged citizens have faced barricades and officers online, shouting out of their windows and banging pots and pans in a sign of frustration and anger.

Communist officials, who tolerate no dissent, have tried to shrug off criticism from the Internet and blame the protests, including beating cooking equipment, on the movement by unidentified “foreign anti-China forces”.

As part of the reopening, Shanghai this week began requiring health institutions to fully resume services wherever possible.

Patients at Downtown Huashan Hospital filled the waiting area with lines outside some departments, according to a report by Shanghai Media Group. While the number of patients has dropped by about two-thirds since the most recent wave, their condition tends to be more severe.

Huashan’s deputy director of dermatology, Wu Wenyu, told Shanghai Media Group that he was seeing patients who had delayed treatment because of the outbreak, some from cities outside Shanghai.

“For example, a patient suffering from (dermatitis) shingles will be in great pain. He must have felt very bad at home, but he could not go to the hospital because of COVID,” Wu said. But now many patients are coming to the doctor.

In some residential communities, a family member was allowed out twice a week to shop, sometimes even to pick up items for neighbors.

Ling Jiazhao, the manager of a supermarket in East Pudong district, told Shanghai Media Group that the store was limiting customers to 50 every half hour.

“I hope this won’t be overcrowded. Each community has two to four hours to go out shopping, so most members will get it done within an hour,” Ling said.

The AAP Is Cautioning Parents to Be Wary of SIDS Study

“Late Night Lamonte” gave the Giants 6-5 over the Padres. raised above