Bengals fanbase in Columbus growing thanks to online community 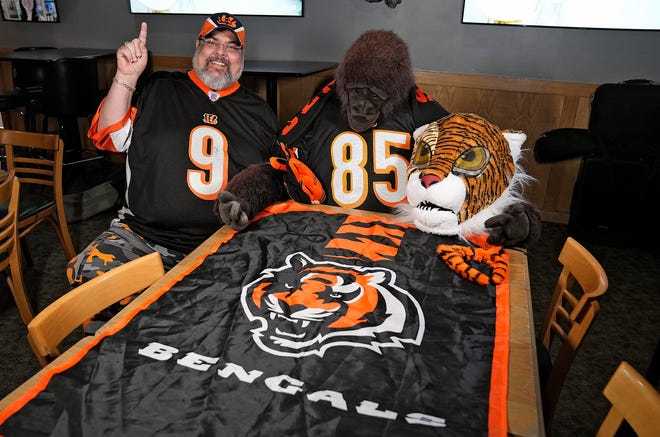 Tom Magin has been a Cincinnati Bengals fan since he was 6 years old.

Growing up in Dayton, his father had season tickets and would often take Magin and his two brothers to games at the now-demolished Riverfront Stadium. When Magin started college in the early 1980s, he attended the University of Cincinnati just so he could go to more Bengals games.

But when Magin moved to the Columbus area in 1988, he found that Bengals fans were few and far between.

“It was really hard to find a group over the years, and you kind of gave up,” he said.

Thirty-four years later — with the Bengals slated to play in Super Bowl LVI Sunday — that trend is starting to change.

Magin, 57, is the organizer of The Columbus Bengal Nation Facebook group, where fans from across the state post photos of themselves decked out in Bengals gear and share articles and videos of the latest team news.

The resident of Columbus’ Far East Side said the group — which had 700 members as of Thursday — has slowly grown since he formed it a decade ago, but membership has gotten dramatically increased since the Bengals won the AFC Championship last month, securing them a spot in the sport’s biggest game against the Los Angeles Rams.

On game days, several members from The Columbus Bengal Nation meet up at a bar called The Pub in Gahanna to watch the game together. Magin said before the current season, between 20 and 30 people typically would show up. But for the last four games the Bengals played right before the playoffs, about 100 people filled up the place.

“My goodness, people are just coming out of the woodwork,” Magin said. I got a guy that drives from Cleveland to our group. And then I just had some other people driving from London, Ohio, recently.

“They’re driving up because now it’s fun because there’s a group. It’s great to yell at the TV, either good or bad, as a group.”

Ed Phelps, 63, joined The Columbus Bengal Nation three years ago. He said he had season tickets for the team for 18 years but could never find anyone to go to the games with him. The Powell resident said he is glad social media made it easier for fans in the area to connect.

“In the last three years, this has really exploded,” Phelps said about the group. “A lot of them were probably just lonely Bengals fans that are now not hesitating to show their loyalty.”

When Magin first moved to Columbus, he noticed that when it comes to NFL football, more local fans favored the Cleveland Browns and Pittsburgh Steelers than the Bengals.

And according to data from Twitter, Greater Columbus’ loyalty to those teams rings true. In 2014, the social media site analyzed the number of people who follow each NFL team on Twitter and their location to come up with a map showing where NFL allegiances lie, reported the Cincinnati Business Courier.

The Browns had a Franklin County stronghold, with 23% of the fans being Browns backers. The Steelers got 13.2% of the support in Franklin County, edging the Bengals’ 13.1% support. Not surprisingly, the Bengals dominated Hamilton County and the rest of the Cincinnati area.

But attracting a growing number of fans from Greater Columbus, Magin and his group have managed to turn The Pub into the place to be for Bengals fanatics to watch games.

Magin said four years ago, he was in search of a new bar to host meetups when bartender Cindy Disbennett suggested they go to The Pub. Even though owner Mike Hardin is a Browns fan, he agreed to let the group come in on Sundays, Magin said.

“We had Browns on one side of the bar, Bengals on the other for games,” Magin said. “It was great. It was even better when we played the Browns. But since then, we’ve pretty much taken over the bar.”

Who dey in Columbus

Now that the Bengals are on their way to the Super Bowl, more people and businesses in Columbus are showing the team some love.

As of Thursday, the Dick’s Sporting Goods store at Polaris had tables full of Bengals T-shirts, hats and jerseys. Restaurants and bakeries such as Schmidt’s Sausage Haus and The Buckeye Lady were offering Bengals-themed sweets and treats. Taft’s Brewpourium Columbus on Sunday will have loaded tots with Skyline Chili and hot dogs, as well as custom pint glasses with the Bengals’ logo included on them.

And the Columbus-based company Homage — which has stores in Easton, the Short North and Cincinnati — has sold thousands of Bengals-specific products since the NFL playoffs started. A popular item has been a T-shirt that says “Why Not Us?!” referring to a team mantra.

“That product has just not been able to stay on our shelves online or in-store,” said Nathan Okuley, Homage vice president of brand marketing.

The company has been working diligently to keep Bengals apparel in its Easton and Short North stores, while other businesses haven’t been so lucky.

“We’ve had friends and family send us photos of empty stores and ‘out of stocks’ online,” Okuley said. “It’s a bummer because it’s just such an exciting moment for the Cincinnati fanbase across the country. There’s definitely supply-chain issues that have impacted the entire industry. So I know everyone’s working as hard as possible and trying to make the most of the moment.”

Meanwhile, Disbennett, 57, said she is happy The Pub has played host to The Columbus Bengal Nation, as she is a huge fan of the team herself, having followed them since she was a kid.

In 1984, Disbennett said that she and a friend drove to Cincinnati to try out for the Bengals cheerleading team. They both ended up making the cut.

“We were so excited and then we both got jobs that wouldn’t allow us to be able to fit their schedule the way we wanted it to,” Disbennett said.

Instead, she continued to follow football and play the sport, joining women’s teams such as the Columbus Pacesetters and the Columbus Comets.

Like Magin, Disbennett sees more Browns and Steelers fans in Greater Columbus. But the Glenford resident said she is sticking with the Bengals no matter what.

“A lot of people jumped off the Bengals bandwagon, but I never jumped off. I’ve always loved my Bengals,” she said.

Before Bengals quarterback Joe Burrow became one of the team’s most popular players, Disbennett remembers seeing him play football at Athens High School and then at Louisiana State University when the Tigers won the national championship in 2019. She said even back then she knew Burrow would be a star.

Disbennett will be watching the Super Bowl with other Bengals fans at the Mill Dam Corner Grille in Hebron, where she is the owner. She said between 75 and 100 people showed up for the AFC championship, so she is expecting a similar crowd for Sunday.

“I’m super excited about it,” Disbennett said. “I am just happy that they made it. If they can pull off one more miracle and win, I’ll be more ecstatic. But even if they don’t, I’m so proud of them.”