Between Ciudad Juan Bosch, Hoyo de Frusa and the Summit of the Americas 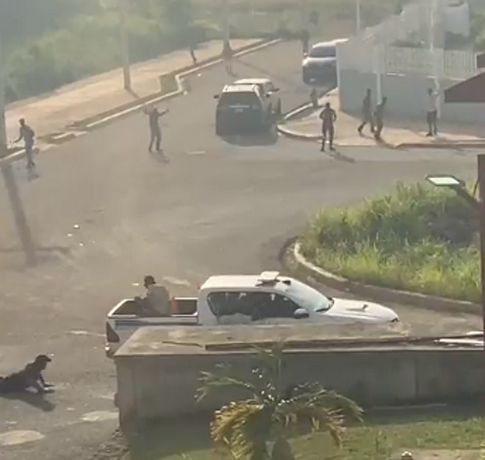 PIt is no secret to anyone that the “migration experiments” conducted by some countries, including Chile and Mexico to give two examples, were a complete failure. The early behavior of many of the welcomed Haitian citizens has not been satisfactory to the societies that sheltered them with hospitality and solidarity, despite tolerating their idiosyncrasies and the culture – very different from the region – they certainly did not socialize. showed some sort of resistance to integrating with.

Let us recall the violent episodes between Chileans and Haitians (2018), in the surroundings of Paseo Estación Central in Santiago de Chile, which led to a wild brawl between informal vendors who argued with foreigners when they Used to feel displaced from the spaces to sell their products. On the road, a situation that caused panic among passersby. A fact that raised national alarm in that country, and which went viral on social networks.

Something similar happened in the public market in the Mexican city of Tapachula on April 20, 2021, when immigration officials arrested three Haitians, a situation that angered twenty of their countrymen who attacked authority and threw stones at buyers and traders. Started. ,

The Dominican Republic does not escape the ill-treatment of citizens who live among us, both in frontier regions and in various neighborhoods of our society, in the same way as South American, Central American, North American and European citizens. The difference is that Haitians do not integrate or accept the rules of good coexistence that are generally common across all states and societies.

On March 18 this year, we were shocked by videos posted on Dominican social networks, which were later reported as news in major local and international newspapers, showing how a group of Haitians – Most of them illegal – launched stones and bottles. Against inspectors from the DGM Immigration Control in the city of Juan Bosch, who were carrying out repatriation operations for undocumented immigrants and had to leave the place to protect their lives while attempting to escape the misfortune, who would later serve the International Service. . community or Haitian NGOs as a means of leveling accusations against the country.

The next day, the DGM, with the help of elite police and military troops, went to the scene, upholding the jurisprudence on migration cases, detaining some 385 undocumented Haitians, taking them to the Hanna Detention Center for purification, registration and repatriation. Human rights, always respecting their rights.

On 1 June, the director of the DGM, LIC Enrique García, offered an interview on the television program “La Option de la Manana”, which was reviewed by this prestigious newspaper under the title “Director of Migration: El Hoyo de Frusa”. Was. Most dangerous corner present in the country”. According to the official, the location represents an alert for the Dominican state as it has been taken over by Haitian citizens.

Given the concerns and questions of the panelists, he limited “We intervened with more than 150 soldiers at El Hoyo de Frusa, the most dangerous site for state intelligence to exist.” Also pointing out: “Neither the police nor the escape can enter there, a party has to enter”

To make matters worse, and without letting our sense of wonder overwhelm us, we see how subtle the signing of an inter-institutional agreement between the Haitian Consulate General of the city of Santiago and the Association of Industrialists of Santiago (ACIS) It is officially declared, with the aim that Haitian workers can opt for social security benefits and thus strengthen the economic, business and industrial systems of both countries.

In this sense, its president, Sandy Filippo, explained that the agreement pursues benefits for businessmen and businessmen from both countries and cited as important to the Creole business community, which provides visas for partners of related institutions. There is a commitment to establish, that it will take not only three months, but one year to make the process more agile.

Both statements from the immigration officer, as well as the agreement between ACIS and a Haitian consul, mean that the two sargas are almost real. First, we practically agree to a “demonetisation” of a fixed demarcation of the national territory, in which the state clearly has no authority or jurisprudence and its institutions have no control over a certain population. Second, and no less important, but more of a concern, but it is extremely dangerous because an entity that brings together a regional trading area would repeal a kind of “supranational right” acting over the Dominican state. Is.

However, we have seen President Luis Abinedar’s intentions, coherence, and firm will regarding Haiti and its rampant migration problem, where many are out of tune with regards to his intentions. Although in the cases mentioned, one corresponds to a state official and the other corresponds to a civilian representative of a non-governmental entity, but both should be focused on the national interest, excluding individual or group interest for the time being.

We understand that no institution, whatever it may be, will ever be above the state or its institutions. If so, then as a society we are collapsing and we must review ourselves, because no one is above the national interest, no matter how well-intentioned we may be to their cause.

On June 10, the IX summit of the Americas concluded, with eight leaders absent, three not invited by the host president, four not participating in protests against that decision, and an eighth suffering from COVID-19. President Abindar once again took advantage of an international event to establish the position of the state and the Dominican government in relation to Haiti, its socio-political instability and the territorial dominance of criminal gangs in that country.

The president called on the international community to come to Haiti’s aid, stopping rhetoric and symposia to continue to seek solutions to the institutional, economic, political, social and security crisis affecting the Caribbean country, “warning” the same with. The Dominican Republic is not and will not be a solution to Haitian drama.

Presumably, at this type of meeting it is planned that the topics to be discussed will be addressed in plenary sessions and technical tables, and even more so the migration issue on which the United States presented a document containing the main Includes Latin America. Dominican Republic The Dominican Republic, where Haitian migration represents more than a migration issue, is a national security problem.

Finally, we recognize the president’s firm decision not to sign the “Declaration of Los Angeles”, as what refers to the migrant issue more closely resembles a design outlined to support the interests of the United States. , which is not clear about what is related. For the region, mainly for our country. Although the document speaks of a commitment to promote “development of countries of origin” to discourage migration, the ultimate goal would be to stop the flow of undocumented immigrants into the United States, and create a nation that currently expels this type. are struggling to do. their final destination of the immigrant. illegal immigration.

The fact of not signing the declaration, President Abindar, explained the sentiment of the Dominican people, who would never admit that anyone infringes on their sovereignty or that they should be part of a solution to the Haitian crisis contrary to the sacred national interest. tries to force.

The author is a founding member of Circulo Delta