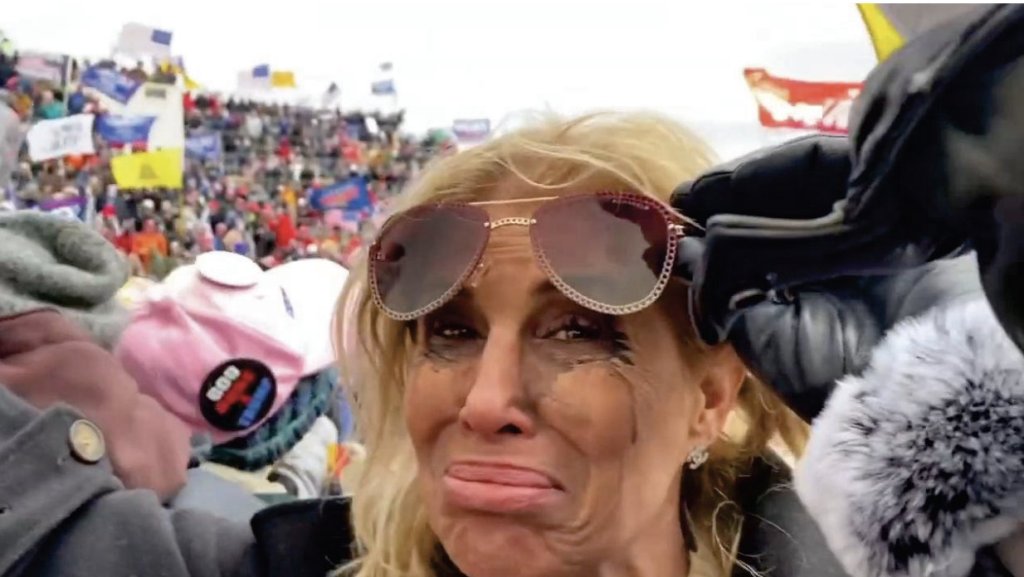 A Beverly Hills salon owner who was caught on video urging on other rioters breaching the Capitol building during the Jan. 6 insurrection is attempting to back out of part of her plea deal and withdraw a guilty plea to the most serious charge she previously admitted to.

Arguing that Gina Bisignano did not know a Senate hearing was taking place and had “smoked some marijuana and drank alcohol” prior to joining mob that breached the Capitol building, attorneys for Bisignano filed a motion on Friday asking a federal judge to allow her to withdraw her guilty plea for an obstruction charge.

The defense attorneys wrote that Bisignano when speaking to prosecutors prior to accepting the plea deal “made it clear that she did no know that entering the Capitol was obstructing a Senate hearing,” adding that “to the contrary, she told the Government that she just followed the crowd and thought they were going to put pressure on (then Vice-President) Mike Pence.”

Bisagnano last year agreed to a plea deal requiring she admit to a half-dozen charges related to her actions during the Jan. 6 insurrection. Federal prosecutors have not yet responded to the defense attorney’s request to allow Bisignano to rescind part of the plea deal, and a hearing has not yet been scheduled to discuss the motion.

The relatively passive description of Bisignano’s actions described in her attorney’s new motion appear at odds with a “statement of offense” she admitted to along with her plea deal.

After watching a speech by then-President Trump, Bisignano filmed himself marching with a large crowd, saying “We are marching to the Capitol to put some pressure on Mike Pence.” After jumping over a low wall and into the edge of Capitol grounds, Bisignano reportedly filmed herself saying “Okay, we are storming the Capitol. And I’m going up in there, I’m going to break into Congress!”

According to the “statement of offense,” Bisignano joined a group of rioters who made their way up an exterior set of stairs and onto the Lower West Terrace before trying to get through a tunnel and past officers outfitted with riot gear into the actual Capitol building . At one point, Bisignano was hit with a direct shot of chemical irritants sprayed by an officer, leading to video footage showing Bisignano with makeup streaming down her face.

After 40 minutes of struggle, the officers were able to push the crowd, including Bisignano, out of the tunnel and back onto the Lower West Terrace. According to her “statement of offense,” Bisignano then urged the rioters to break a nearby window.

Bisignano climbed onto the ledge of a windowsill, as several other people used various items — including a hatchet-style tool and a fire extinguisher — to break open the window.

Read Also:  American dream? Sena opens call for work in the US with millionaire salaries

“Bisignano admits that her belief that the Electoral College results were fraudulent is not a legal justification for unlawfully entering the Capitol building and attempting to influence, stop or delay the Congressional proceedings,” federal prosecutors wrote in the statement of offense court filing.

In the new motion, Bisignano’s attorney argued that the specific federal statute governing the obstruction charge she admitted to is ambiguous and claimed that prosecutors had coerced her guilty plea despite her indicating at the plea hearing that they hadn’t.

If Bisignano is allowed to withdraw her guilty plea to the obstruction charge it isn’t clear if the rest of the plea deal would remain or what potential impact it would have on her prison sentence. Under the existing plea deal, she faced 41 to 51 months behind bars, court records show.

Earlier this year, NBC News reported that Bisignano in a recorded chat with supporters voiced regrets about taking a plea deal, apparently indicating that she accepted it out of fear and reportedly saying “I wish that I was stronger, because I was so weak when I signed it.”

More than 800 people nationwide have been arrested in connection to the violent but ultimately failed attempt to stop Congress from certifying President Joe Biden’s electoral victory, including more than two-dozen with ties to Orange County. So far, more than 275 defendants nationwide have pleaded guilty to federal charges, the bulk of whom admitted to misdemeanor counts that amount to trespassing in the Capitol building or adjacent restricted grounds.

Tiktok all set to bring back ‘Twi’

New Hampshire, Vermont has COVID-19. asked to test the deer for