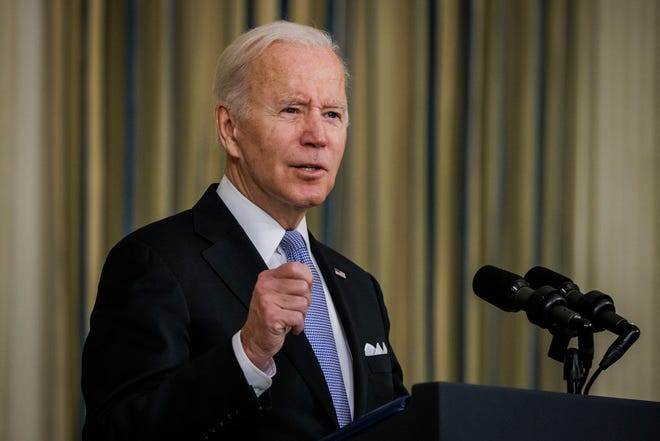 A year before the 2022 midterm elections, Republicans hold a clear lead on the congressional ballot as President Joe Biden’s approval rating sinks to a new low of 38%.

A USA TODAY/Suffolk University Poll, taken Wednesday through Friday, found that Biden’s support cratered among the independent voters who delivered his margin of victory over President Donald Trump one year ago.

Biden and his party are poised for a rebound, advocates argue, after the House passed a $1.2 trillion “hard” infrastructure bill late Friday, sending the signature measure to Biden’s desk for his signature. An encouraging economic report released Friday morning showed stronger-than-expected job growth.

That said, the survey illuminates the size of the hole Democrats need to dig out of as they look toward the elections in one year – on Nov. 8, 2022 – that will determine control of Congress and shape the second two years of Biden’s term.

At the moment, views of the president have sourced.

If the election were today, those surveyed say, they would vote for their Republican congressional candidate over the Democratic one by 46%-38%, an advantage that would bode well for GOP hopes of gaining a majority in the House and the Senate. In a president’s first midterm election, his party usually loses ground, and this time the GOP needs to flip just five seats in the House and one in the Senate to claim control.

That outcome would make it even harder for Biden to pass legislation – already a difficult task in a Democratic-controlled Congress – and open the door to aggressive Republican oversight of his administration.

Analysis:Paleologos on the Poll: Republican hold notable advantage heading into 2022

The poll of 1,000 registered voters, taken by landline and cellphone, has a margin of error of plus or minus 3.1 percentage points.

Tony Emmi, 62, a retired health care worker from Wilmington, Delaware, who was among those surveyed, voted for Biden for president and derides Trump as “deceitful” and “malicious.” But the Democrat says Biden hasn’t done enough to hold his party to account and get things done.

“I think this country is moving in a direction that is dangerous,” Emmi says.

Two-thirds of Americans (66%) say the country has gotten on the wrong track; one in five (20%) say it is headed in the right direction. That’s no better than the public’s uneasy view during the final weeks of the Trump administration.

‘Stuff that’s keeping me up at night’

The infrastructure bill, which passed Friday with some bipartisan support, is backed by 2-1 (61%-32%) among those surveyed. The supporters include a third of Republicans.

“We’re not keeping our infrastructure updated – I don’t mean currently updated, I mean since 1930, some of these things have been in place,” says Kathleen Loyd, 70, a retired juvenile court officer from Piedmont, in southeast Missouri . She dodges potholes when she drives and had to remodel her kitchen after a water main broke.

Virginia, New Jersey elections:How Democrats lost voters, and what it means for 2022

Americans are closely divided on the “Build Back Better” act pressed by congressional Democrats. In the poll, 47% support the $1.85 trillion bill; 44% oppose it. The sweeping measure includes more than $500 billion in climate change and clean energy funding. It would establish pre-K for all 3- and 4-year-olds; extend the child tax credit for one year; expand Medicaid coverage in some states; add hearing coverage to Medicare; and finance affordable housing programs.

The White House and its allies haven’t persuaded most Americans that the measure would benefit them, at least not yet. Those surveyed are a bit more likely to say its provisions would hurt their families rather than help them, 30%-26%. Thirty-one percent say it would not have much effect.

Those findings reflect either a failure of communication by the bill’s backers or a disconnect with what voters feel they most need.

“Is this spending bill out of control? I don’t know,” says Nia Anderson, 45, a stay-at-home mother of three in Minnesota’s Twin Cities. She voted for Biden and says he’s doing “fine,” but “I’m worried about my kids, and I’m worried about my family.”

She was getting ready to take her children, ages 13, 9 and 6, across town to get vaccinated against COVID-19. “That’s the stuff that’s keeping me up at night,” she says.

More:Paleologos on the Poll: Republican hold notable advantage heading into 2022

Last week, Republican Glenn Youngkin defeated Democrat Terry McAuliffe for governor in a closely watched off-year election in Virginia. In the poll, 48% agree the outcome is a “telling sign of a Republican sweep in 2022.” Thirty-nine percent say it was “a state election and doesn’t have national implications.”

Biden loses ground with voters who backed him 2020

Biden has lost ground with voters since he won last year’s election, but Trump hasn’t gained it. Over the past year, two-thirds of those surveyed say, their opinion of Trump hasn’t changed. Fourteen percent say their view of him has gotten better, 19% say it has gotten worse.

But Trump commands more loyalty among his core supporters than Biden does.

“I thought he did a great job then, and I know he’ll do a great job in the future,” says Lynda Ensenat, 54, a Trump voter and independent insurance adjuster from New Orleans. “There’s a whole lot going wrong in this society right now, and all the Democrat liberals – that’s what they’re 100% for.”

She says Biden has “been wrong on absolutely everything he’s touched.”

If the presidential election were today between Biden and Trump, 44% say they would vote for Trump, 40% for Biden, 11% for an unnamed third-party candidate. In the election last year, Biden beat Trump 54%-47%.

Loyd, the retiree from Missouri, used to think of herself as a Democrat but voted for Trump in 2016, then left the presidential ballot blank in 2020. She’s so disenchanted with politics that she has stopped watching news coverage as closely as she once did.

She worries that the president isn’t competent but says her Republican congressman panders to the right with a false claim that Biden didn’t win the election, and she hates the name-calling that is now commonplace in politics.

“I don’t think anybody is talking to the average American citizen,” she says.

Afghanistan takes toll on Biden:Americans’ harsh judgment on Afghanistan costs Biden’s approval, down to 41%, according to USA TODAY/Suffolk Poll

USA TODAY/Suffolk Poll in January:Americans, braced for violence at the inauguration, see democracy damaged after Trump