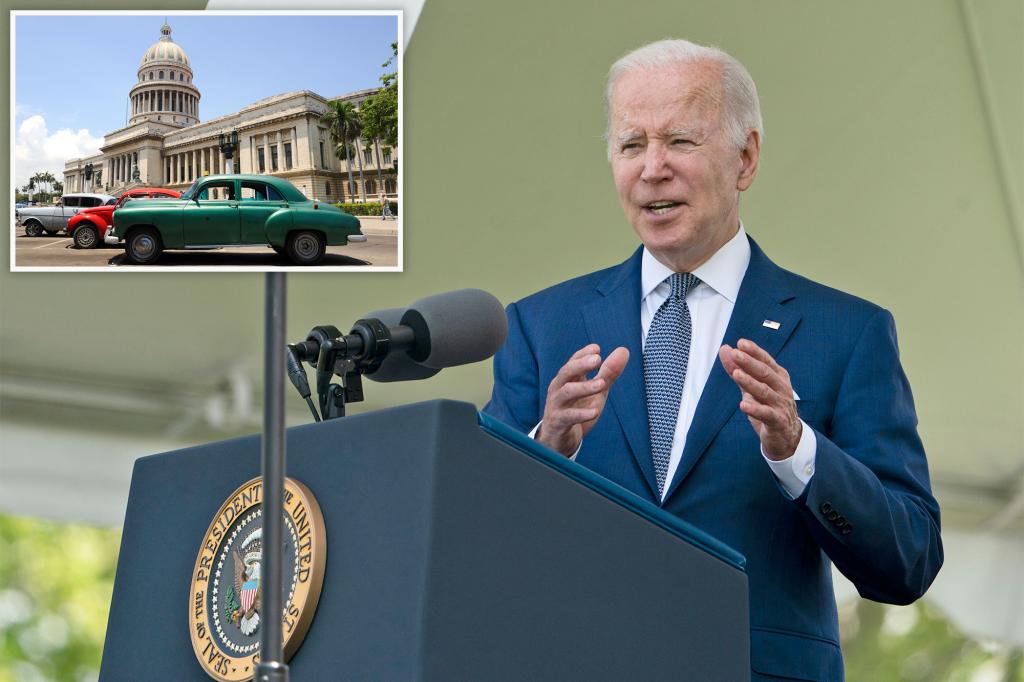 The Biden administration on Monday said it would relax rules for sending money to Cuba and reverse former President Donald Trump’s policies that made it more difficult to travel to or migrate from the island.

The slate of changes outraged prominent Cuban-American politicians who hoped Cuba’s authoritarian Communist leaders were on the ropes after large anti-government protests last year, which were harshly repressed.

The financial reforms include lifting a $1,000 per quarter remittance cap and allowing for direct US investments for the first time since 1960.

The US will also restart a family reunification program for Cubans to move to the US, which the Trump administration suspended in 2017, and resume “educational” US group travel to the island that was banned in 2019.

Sen. Bob Menendez (D-NJ), the chairman of the Senate Foreign Relations Committee, condemned the plan to resume educational group tours, saying in a statement that the plan was “akin to tourism” and would benefit the Cuban government.

“I am dismayed to learn the Biden administration will begin authorizing group travel to Cuba through visits akin to tourism. To be clear, those who still believe that increasing travel will breed democracy in Cuba are simply in a state of denial,” Menendez said.

Sen. Marco Rubio (R-Fla.) tweeted“The regime in #Cuba threatened [President] Biden with mass migration and have sympathizers inside the administration and the result is today we see the first steps back to the failed Obama policies on Cuba.”

Nicaragua’s leftist government in November allowed Cuban citizens to visit without a visa, and many Cubans are using the Central American nation as a starting point to reach the US-Mexico border, where COVID-19 deportation policies are scheduled to end next week.

Read Also:  Du Nahle denies cost escalation at two-mouth refinery; "It was made in record time," he noted.

The restarted Cuban Family Reunification Parole Program allows for 20,000 US visas per year.

One administration official said that “the humanitarian situation in Cuba right now is very concerning. And as the president directed us to find ways to meaningfully support the Cuban people, he assessed that these measures do take steps to do so at a particularly concerning time.”

A different official noted US condemnation of the Cuban authorities’ repression of protests last year.

“The crackdown by the Cuban regime after the July 11 protests were there for I think the world to see and the sentences that were imposed on people that were singing in the streets and asking for food and to have a greater say in the future of their country really shows the situation, the lack of respect for human rights on the island,” the second official said.

He added, “But these are steps that we thought were designed to get specifically to the Cuban people and that were in our unilateral interest.”

US citizens have been allowed to visit Cuba since President Barack Obama’s administration relaxed decades-old rules in 2015 — though many flouted the prior US ban and entered through third countries.

Although Trump rescinded the educational group tours, US citizens have still been allowed to go if they could document their “Support for the Cuban People” with little enforcement and easy-to-meet guidelines such as staying at an Airbnb rental rather than a hotel and dining at private restaurants.

The precise new US policies around investments in Cuba were not described in detail in government releases.

Stay up on the very latest with Evening Update.

The Miami Herald reported Monday that last week the US Treasury Department issued a precedent-setting decision granting a license to a company controlled by John Kavulich, president of the US-Cuba Trade and Economic Council, to invest less than $25,000 in a Cuban business.

The Herald said the Treasury Department’s decision “appears to be a first in more than six decades” and “could open the gate to American investment.”

Cuban government salaries are extremely low by international standards — with doctors earning just $67 per month. Since 2010, Cubans have been allowed to engage in some private enterprises, including owning restaurants.

The State Department cast the Biden reforms as enabling greater freedom from the Communist government, despite pushback.

“We will encourage the growth of Cuba’s private sector by supporting greater access to US Internet services, applications, and e-commerce platforms. We will support new avenues for electronic payments and for US business activities with independent Cuban entrepreneurs, including through increased access to microfinance and training,” the State Department said.

“We will also support Cuban families and entrepreneurs by enabling increased remittance flows to the Cuban people in ways that do not enrich human rights abusers. We will lift the family remittance cap of $1,000 per quarter and will support donative remittances to Cuban entrepreneurs, both with the goal of further empowering families to support each other and for entrepreneurs to expand their businesses.”

More than a billion seashore animals may have cooked to death in BC heat wave, says UBC researcher | Nation World News

nothing shows the evolution of the phone (1) notification LED