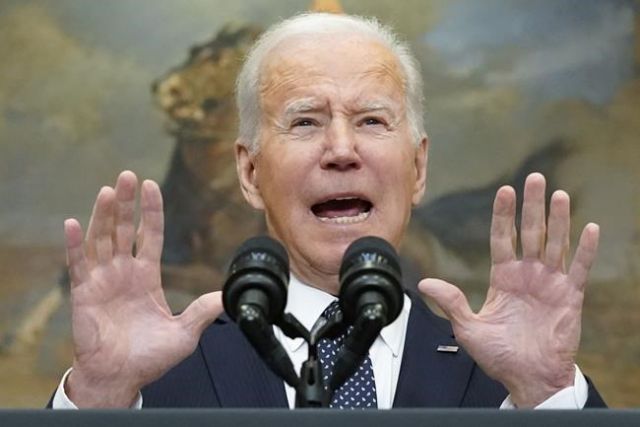 US President Joe Biden said Friday that he is “convinced” Russian President Vladimir Putin has decided to invade Ukraine, including an assault on the capital, as tensions spiked along the militarized border with attacks that the West called “false-flag” operations meant to establish a pretext for invasion.

A humanitarian convoy was hit by shelling, and pro-Russian rebels evacuated civilians from the conflict zone. A car bombing hit the eastern city of Donetsk, but no casualties were reported.

After weeks of saying the US wasn’t sure if Putin had made the final decision to invade, Biden said that assessment had changed, citing American intelligence.

“As of this moment I’m convinced he’s made the decision,” Biden said. “We have reason to believe that.” He repeated that the assault could occur in the “coming days.”

Meanwhile, the Kremlin announced massive nuclear drills to flex its military muscle, and Putin pledged to protect Russia’s national interests against what it sees as encroaching Western threats.

Biden reiterated his threat of massive economic and diplomatic sanctions against Russia if it does invade, and pressed Putin to rethink his course of action. He said the US and its Western allies were more united than ever to ensure Russia pays a price for the invasion.

With an estimated 150,000 Russian troops posted around Ukraine’s borders, US and European officials warn that the long-simmering separatist conflict in eastern Ukraine could provide the spark for a broader attack.

As further indication that the Russians are preparing for a potential invasion, a US defense official said an estimated 40% to 50% of the ground forces deployed in the vicinity of the Ukrainian border have moved into attack positions nearer the border. That shift has been under way for about a week, other officials have said, and doesn’t necessarily mean Putin has decided to begin an invasion. The defense official spoke on condition of anonymity to discuss internal US military assessments.

The official also said the number of Russian ground units known as battalion tactical groups deployed in the border area had grown to as many as 125, up from 83 two weeks ago. Each battle tactical group has 750 to 1,000 soldiers.

Lines of communication remain open: The US and Russian defense chiefs spoke Friday, and US Defense Secretary Lloyd Austin called for de-escalation, the return of Russian forces surrounding Ukraine to their home bases and a diplomatic resolution, according to the Pentagon. Secretary of State Antony Blinken and Russian Foreign Minister Sergey Lavrov agreed to meet next week.

Immediate worries focused on eastern Ukraine, where Ukrainian forces have been fighting pro-Russia rebels since 2014 in a conflict that has killed some 14,000 people.

A bombing struck a car outside the main government building in the major eastern city of Donetsk, according to an Associated Press journalist there. The head of the separatist forces, Denis Sinenkov, said the car was his, the Interfax news agency reported.

There were no reports of casualties and no independent confirmation of the circumstances of the blast. Uniformed men inspected the burned-out car.

Shelling and shooting are common along the line that separates Ukrainian forces and the rebels, but targeted violence is unusual in rebel-held cities like Donetsk.

However, the explosion and the announced evacuations were in line with US warnings of so-called false-flag attacks that Russia would use to justify an invasion.

Adding to the tensions, two explosions shook the rebel-controlled city of Luhansk early Saturday. The Luhansk Information Center said one of the blasts was in a natural gas main and cited witnesses as saying the other was at a vehicle service station. There was no immediate word on injuries or a cause. Luhansk officials blamed a gas main explosion earlier in the week on sabotage.

Separatists in the Luhansk and Donetsk regions that form Ukraine’s industrial heartland known as the Donbas said they are evacuating civilians to Russia. The announcement appeared to be part of Moscow’s efforts to counter Western warnings of a Russian invasion and to paint Ukraine as the aggressor instead.

Denis Pushilin, head of the Donetsk rebel government, said women, children and the elderly would go first, and that Russia has prepared facilities for them. Pushilin alleged in a video statement that Ukrainian President Volodymyr Zelenskyy was going to order an imminent offensive in the area.

Metadata from two videos posted by the separatists announcing the evacuation show that the files were created two days ago, The Associated Press confirmed. US authorities have alleged that the Kremlin’s disinformation campaign could include prerecorded videos.

Authorities began moving children from an orphanage in Donetsk, and other residents boarded buses for Russia. Long lines formed at gas stations as more people prepared to leave on their own.

Putin ordered his emergencies minister to fly to the Rostov region bordering Ukraine to help organize the exodus and ordered the government to offer a payment of 10,000 rubles (about $130) to each evacuee, equivalent to about half of an average monthly salary in the war- ravaged Donbas.

Read Also:  Grattan on Friday: The allegation against Alan Tudge hit the Morrison government where it hurt

Around the volatile line of contact, a United Nations humanitarian convoy came under rebel shelling in the Luhansk region, Ukraine’s military chief said. No casualties were reported. Rebels denied involvement and accused Ukraine of staging a provocation.

Separatist authorities reported more shelling by Ukrainian forces along the line. A surge of shelling Thursday tore through the walls of a kindergarten, injuring two, and basic communications were disrupted. Both sides accused each other of opening fire.

UN Secretary-General Antonio Guterres said the threat to global security is “more complex and probably higher” than during the Cold War. He told the Munich conference that a small mistake or miscommunication between major powers could have catastrophic consequences.

Russia announced this week that it was pulling back forces from vast military exercises, but US officials said they saw no sign of a pullback — and instead saw more troops moving toward the border with Ukraine.

Meanwhile, the White House and the UK formally accused Russia of being responsible for recent cyberattacks targeting Ukraine’s defense ministry and major banks. The announcement was the most pointed attribution of responsibility for the cyber intrusions.

Also Friday, the US government released new estimates of how many military personnel Russia has in and around Ukraine. It said there are between 169,000 and 190,000 personnel, up from about 100,000 on Jan. 30, according to Michael Carpenter, the permanent US representative to the Organization for Security and Cooperation in Europe.

The new estimate includes military troops along the border, in Belarus and in occupied Crimea, as well as Russian National Guard and other internal security units, and Russian-backed forces in eastern Ukraine. The separatists inside Ukraine, the National Guard and troops in Crimea were not included in the previous US estimate of 150,000.

The Kremlin sent a reminder to the world of its nuclear might, announcing drills of its nuclear forces for the weekend. Putin will monitor the sweeping exercise Saturday that will involve multiple practice missile launches.

Asked about Western warnings of a possible Russian invasion on Wednesday that didn’t materialize, Putin said: “There are so many false claims, and constantly reacting to them is more trouble than it’s worth.”

“We are doing what we consider necessary and will keep doing so,” he said. “We have clear and precise goals conforming to national interests.”

‘Wheels Up’: After Tough Journey, Afghan Interpreter Makes for Marines at Kabul Airport

US may leave Iran nuclear deal if talks do not progress