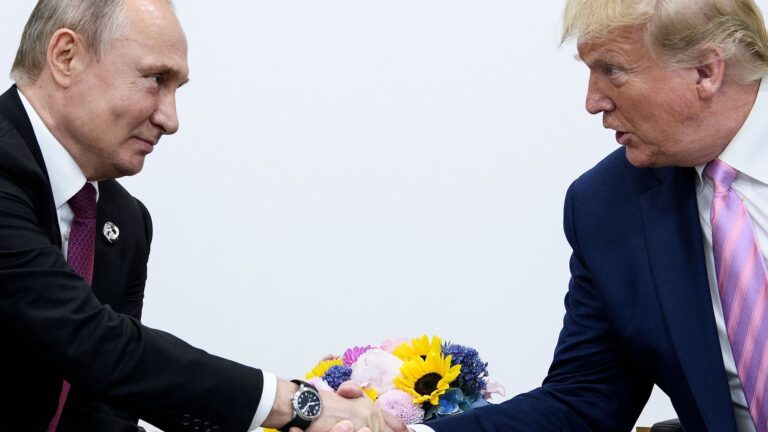 SUPERIOR Wisc. – President Joe Biden failed to bring up the Jan. 6 assault on the Capitol incited by his predecessor in his State of the Union speech, but less than a day later essentially made Donald Trump, without ever mentioning his name, the American face of Russia’s dictator.

“Vladimir Putin was counting on being able to split up the United States,” Biden said, and proceeded to describe the Trump-inspired mob that attacked the Capitol with the goal of overturning the 2020 election.

“Look, how would you feel if you saw crowds storm and break down the doors of the British Parliament, kill five cops, injure 145 ― or the German Bundestag or the Italian Parliament? I think you’d wonder,” he said. “Well, that’s what the rest of the world saw. It’s not who we are. And now, we’re proving, under pressure, that we are not that country. We’re united.”

The little-noticed remarks at the University of Wisconsin-Superior student union came just 18 hours after Biden did not mention the Jan. 6 attack at all in his hourlong State of the Union address to Congress and the nation.

Polls show that Americans are no longer as concerned about the attempt to forcibly keep Trump in power as they were immediately afterward. Indeed, Americans generally, and more so Republicans and independents, are also less inclined to believe that Trump was responsible for the attack than they were a year ago.

Republican pollster Neil Newhouse said that if Biden is hoping to stoke interest in Jan. 6, it is not likely to work.

“The Jan. 6 events are already baked into voters’ minds, and I have a hard time believing that any new revelations will impact attitudes one way or another,” he said. “That’s especially true when Americans are focused on other current event and issues, like Ukraine, inflation, crime and the economy.”

Perhaps appreciating where public sentiment is today, Biden actually drew an explicit link between Jan. 6 and Putin’s invasion of Ukraine. He said Putin assumed that his long efforts to sow division in the West, including the United States, would let him get away with seizing Russia’s neighbor.

“We were able to make sure we kept Europe united and the free world united,” Biden said. “In my view, he did what he did because he thought he could split NATO, split Europe, and split the United States. We’re going to demonstrate to the whole world no one can split this country.”

Deputy White House press secretary Karine Jean-Pierre, when asked why Biden had not talked about Jan. 6 in his State of the Union, told reporters Wednesday that he has spoken about it many times, including a lengthy speech on the first anniversary of the attack earlier this year.

One White House official said on condition of anonymity that Biden would continue to discuss Jan. 6 as needed. And press secretary Jen Psaki on Thursday, responding to a question about the House Jan. 6 committee, repeated Biden’s previous statements that Jan. 6 was a uniquely dangerous event in the nation’s history caused by the sitting president at the time, and needed to be treated as such.

Trump, who now is under investigation in multiple jurisdictions for his post-election actions, was elected with the open help of Putin in 2016. The Russian leader’s agencies intelligence stole documents from the campaign of Democratic nominee Hillary Clinton and made them available. Trump used that material daily during the final month before Election Day, even though he knew it had been stolen for him by Putin’s spies.

Putin also mounted a propaganda campaign using social media to generate false stories about Clinton with the goal of depressing Democratic turnout, according to both Special Counsel Robert Mueller as well as the Senate Intelligence Committee.

Four years later, Russia was again working for Trump, and then after his loss helped amplify his lies that the election had been “stolen” from him ― lies that fomented the anger among Trump’s followers that culminated in the violent attack on Jan. 6.

Since then, Russian state media, “troll farms” and even Putin himself have been spreading Trump’s claims that the supporters who were arrested for their participation that day are “political prisoners” and are being unfairly persecuted.

Trump, despite losing the election by 7 million votes nationally and 306-232 in the Electoral College, became the first president in more than two centuries of elections to refuse to hand over power peacefully. His incitement of the Jan. 6 assault on the Capitol ― his last-ditch attempt to remain in office ― led to the deaths of five people, including one police officer, injured another 140 officers and led to four police suicides.

That attempt to remain in power notwithstanding his loss has sparked both state and federal investigations.

The district attorney in Fulton County, Georgia, has impaneled a special grand jury just to focus on Trump’s attempt to coerce state officials to “find” enough votes to overturn his loss of that state to Biden in 2020.

And the House Jan. 6 committee has been subpoenaing more and more former and current Trump aids to determine his precise role in that day’s events, while the Department of Justice has confirmed that it is investigating at least one element of Trump’s scheme to remain in power: the submission of fake Trump “electors” in states that Biden won.

This week, Jan. 6 committee filed a lengthy brief in federal court in California in a lawsuit filed by a pro-Trump lawyer who wrote a memo arguing that Vice President Mike Pence had the unilateral ability to declare Trump the winner. That lawyer, John Eastman, is now trying to block the release of his emails on the topic. In the 221-page document, the committee told the judge that the lawyer cannot cite attorney-client privilege because of, among other reasons, the “crime-fraud” exception to that rule.

“The select committee … has a good-faith basis for concluding that the president and members of his campaign engaged in a criminal conspiracy to defraud the United States,” the committee’s lawyers wrote.

In response, Trump has asked his followers to stage “the biggest protests we have ever had in Washington, DC, in New York, in Atlanta and elsewhere” if prosecutors come after him, “because our country and our elections are corrupt.”

Despite this, Trump remains the dominant figure in the Republican Party and is openly speaking about running for the presidency again in 2024.